Here in California, rooftop solar has been in the news quite a bit lately, as net energy metering and other distributed generation policies are under review at the Public Utilities Commission and in the legislature. 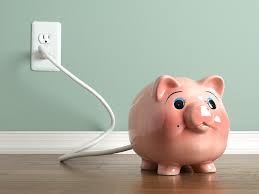 One frequent defense of rooftop solar goes, “Panels on the roof are just one of many ways to reduce your consumption from the grid, as are more efficient appliances, or just conserving electricity by living in a smaller house, drying clothes on a line, or using fans instead of air conditioning.” In response to policy proposals that would make rooftop solar less financially attractive, the rhetorical response is, “next are you going to penalize customers for living in small houses or not installing A/C?”

At first blush, it’s a compelling analogy. The cost shift associated with rooftop solar occurs because the electricity prices that consumers pay are much higher than the grid cost of supplying the power that it replaces. The difference covers many fixed costs, including grid infrastructure, public purpose programs (including energy efficiency subsidies), rate subsidies for low income households, and wildfire mitigation, among other things.

If you don’t buy an air conditioner and consume less electricity, you are also paying less towards these fixed costs, just as happens when you install rooftop solar. Any reduction in kWh you buy from the grid, whether it is due to efficiency, living more modestly, or solar, has this impact.

Nonetheless, this defense of rooftop solar starts to break down when you look at it more broadly or more closely. More broadly, why are we recovering these fixed costs through the volumetric electricity prices at all? These costs are truly unrelated to a household’s consumption level, so we distort choices when we tax electricity to pay for them, as we have talked about in previous blogs.

No, it’s not about penalizing customers for consuming too little electricity. It’s about sharing the burden of a public resource in an equitable way – whether that’s grid infrastructure or wildfire preparation or subsidies for low-income households. We don’t rely on per-use fees to cover most costs of streetlights, parks, police, government data on the internet, or other public services that are mostly fixed costs. Why should we finance the fixed costs that are somewhat related to electricity – in some cases very loosely related – by raising the charge for electricity?

In addition, looking more closely at the argument that rooftop solar is just another efficient way to reduce demand from the grid reveals important flaws in the analogy.

First, if rooftop solar is a form of energy efficiency, it’s a really costly form. It doesn’t have the ancillary benefits of some efficiency improvements, like insulation, that make a house more comfortable. For most adopters, it’s a financial decision based on the price of the solar and the price of electricity. It’s attractive in California not because the cost of rooftop solar is so low – it is many times more expensive than grid-scale renewables – but because retail electricity prices are so high. It’s very expensive “energy efficiency” compared to LED light bulbs or buying efficient appliances, for instance. If a technology saves consumers 20-30 cents per kWh (retail price) by making an investment that costs 13 cents to 22 cents per kWh, but only avoids about 8 cents (including pollution costs) in electricity supply costs – as is the case for solar in California – good public policy shouldn’t prioritize that sort of investment.

Second, rooftop solar in California (and many other locations) now delivers demand reduction to the grid at the lowest-value time, just when supply is plentiful. In 2008, I did an analysis showing that solar was more valuable than average supply, because of its favorable timing back then, but that finding is so 2000s. As more and more solar has blanketed the grid, many recent studies, including detailed work by Jim Bushnell and Kevin Novan, have shown that solar is now less valuable than average. Improved air-conditioning efficiency delivers at especially high-value times, as Judd Boomhower and Lucas have shown. Rooftop solar in California now does the opposite.

Third, to the electricity grid, rooftop solar would look like energy efficiency if it were just a reduction in demand, but that’s not what rooftop solar does. Half of the typical output from a rooftop system is injected into the local distribution wires, which makes it a very different product. Traditional energy efficiency doesn’t require special metering and tariffs to value those power injections. Generating power on rooftops for distribution on the grid can be valuable or costly depending on the exact location and timing, but it is definitely not the same as reducing consumption.

Very few energy efficiency advocates argue that a household can efficiency its way to zero carbon emissions, or that it should try. Energy efficiency can be a cost-effective way to eliminate some of a customer’s demand, not a path to virtually eliminating their electricity bills. In contrast, the typical new residential solar system in California is now about 6 kW capacity, which generates over 10,000 kWh per year (at a 20% capacity factor), about 50% more than the average California household consumes. Solar adopters are much bigger than average users, and – under net energy metering rules – they are offsetting the vast majority of their usage.

Like energy efficiency technologies, policy towards rooftop solar should be based on the specific benefits and costs (monetary, environmental, and others) that it brings to society, not the dollars that it saves the adopter. Analogies can be useful, but they can also be misleading. It’s time to debate rooftop solar based on what it is, not on what it is sort of similar to.