Every summer vacation, we pack our tree-hugging family into the car and head for the Sierra Nevada mountains. In many respects, our trip this summer was just like any other year, complete with family bonding moments and awe-inspiring wilderness experiences:

But our 2016 photo album is not all happiness and light.  This year, we saw an unprecedented number of stressed and dying trees. Forest roads were lined with piles of dead wood.

These pictures break a tree hugger’s heart. But they barely scratch the surface of what has been dubbed the worst epidemic of tree mortality in California’s modern history. According to CAL FIRE, over 66 million trees have died since 2010. And it’s not over yet.

The underlying cause is climate change working through drought and bark beetles. Warmer winters and drier summers mean this pesky bark beetle has been reproducing faster and attacking harder.  Drought-stressed trees are more vulnerable to fungi and insects. The big-picture impacts are devastating.

Acres of dying trees raise fundamental questions about how to preserve and protect our national parks and forests in the face of climate change. These existential issues were at the heart of President Obama’s speech in Lake Tahoe last week. But the epidemic also raises some more material questions. This week’s blog looks at the heated debate over what to do with millions of dead trees in the forest.

I’m an economist, not a woody plant biologist, so I have a hard time thinking in terms of millions of trees. With some expert assistance, I made the following ballpark conversion from trees to some more familiar metrics.

Upshot is that 66 million dead trees is a big deal, no matter how you measure it.

There seems to be widespread – but not unanimous– agreement that leaving close to 40 million dry tons of wood (my rough estimate) in the forest will increase wildfire risk and intensity to unacceptable levels. So Governor Brown has declared a state of emergency and formed a tree-mortality task force to safely remove the dying trees, especially those that pose immediate danger. Having dragged these trees out of the forest, what to do with them?  Right now, many trees are being burned in open piles or “air curtain incinerators”. 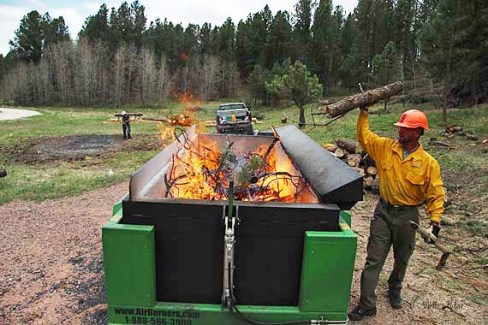 CalFire plans to start running these incinerators 24 hours per day in the fall.  Yikes. The thought of incinerating wood in the forest 24/7 begs the question: are we better off using these trees to generate electricity? Researchers, including some esteemed Berkeley colleagues and forest service scientists, have been collecting some of the information we need to answer this question.

Forest-fueled electricity generation – at what cost?

Some stakeholders argue that current market prices and policy incentives are failing to capture all the benefits of biomass generation has to offer. In particular, a growing body of research looks at  relative environmental impacts. The table below summarizes some recent estimates of the quantity of pollution emitted per kg of dry wood across different wood burning alternatives:

Sources are here and Placer County Biomass Program. Biomass to energy conversion assume trees are 40 miles from the site of generation.

It is standard to see avoided emissions from displaced electricity generation counted as an added benefit of biomass generation. Absent binding regulatory limits on GHG emissions, this can make sense. But in California, CO2e emissions are regulated under a suite of climate change policies, some of which are binding.  If the aggregate level of emissions is set by binding regulations, an increase in biomass generation will change the mix of fuels used to generate electricity, but not the level of CO2e emissions.

If avoided CO2e emissions are set to zero, the estimated CO2e emissions per kg of wood burned look fairly similar across non-utilization burning and biomass generation. In contrast, these alternatives differ significantly as far as harmful pollutants such as NOx and particulates are concerned. Aggregate emissions of these pollutants are not determined by mandated caps or binding standards.  And the quantity of pollution emitted per unit of wood burned differs by orders of magnitude across non-utilization versus electricity generation options.

It is not clear how differences in these (and other) emissions translate into differences in health and environmental damage costs. But accounting for these environmental costs would presumably reduce the net cost of  biomass generation relative to the more polluting alternative.

Many of the forest managers and researchers I talked to despair that biomass generation facilities are closing down just as air curtain incinerators fire up. They feel strongly that more of this dead wood should be used to fuel electricity generation. In response to these kinds of concerns, the California legislature recently passed legislation to support biomass power from facilities that generate energy from wood harvested from high fire hazard zones.  The bill is awaiting the Governor’s signature.

Increased support for biomass generation (over and above existing climate change policies) makes sense if the benefits justify the added costs. On the one hand, burning more wood at biomass facilities will incur additional processing, transport, and operating costs. On the other hand, it will generate less local air pollution as compared to non-utilization burning and other potential benefits (such as reduced ancillary service requirements vis a vis intermittent renewables). Getting a better handle on these costs and benefits will be critical if we are going to make the best of this bad situation.

[1] Assuming a mix of conifer species (pine, Douglas-fir, true fir, cedar), we estimate1800 green pounds per tree. X 66 million trees = 118.8 billion green pounds of wood available or 59.4 million green tons.  If we assume 35% moisture content (dead trees have less moisture) we have 38.6 million BDT (bone dry tons). Multiply the dry tons by 0.5 to obtain a comparable weight of entire tree’s sequestered carbon.  This gets us to 19.3 million tons of carbon. Multiply tons of carbon by 3.67 to get comparable weight in CO2e, and then convert to metric tons = 68.7 million tons. Thanks to Steve Eubanks, Tad Mason, and Bruce Springsteen for assisting with these calculations. All errors are mine.

25 thoughts on “If a Tree Falls in the Forest…Should We Use It to Generate Electricity?” Leave a comment ›