Air conditioning  made lots of headlines this summer. In newspaper accounts, internet memes, and office gripe sessions, there was much commiseration about the over-air conditioning of the American workplace….

It seems no one is spared from these polar working conditions – not even energy efficiency advocates!  Colleagues of mine recently attended an energy efficiency conference in the midst of a summer heat wave. Organizers courteously (but ironically) distributed blankets to help shivering attendees keep warm in heavily air conditioned meetings (about energy efficiency!). This is like handing out jelly doughnuts at a weight watchers meeting.

On the face of it, widespread accounts of frigid summer working conditions seem to point to an absurd waste of energy.  But thermal comfort is highly subjective. If complaints are all coming from the easily-chilled tail of the thermal preference distribution, is it possible that office temperatures are about right on average?

In theory, indoor office temperatures should be about right. Temperature control standards for most office building are calibrated to optimize something called the “Predicted Mean Vote”. This is a formula that predicts how a large group of people would vote (too cold registers as a negative number; too hot registers as positive; zero = just right) as a function of indoor temperatures, metabolism rate, clothing, etc.

But a provocative study released last month suggests this PMV formula needs updating. These authors claim that one of the primary inputs to current standards – the metabolic rate- is calibrated to the average male. When the researchers measure the average metabolic rate for a small group of young adult females performing light office work, they find significantly lower metabolic rates.

The media spin on this paper played up the irresistible battle of the sexes dimension. This set off a heated/amusing debate between freezing women who decry “sexist thermostats!” and sweaty men who point to the first fundamental law of clothing (you can always put more on -but there is a limit to how much you can appropriately remove!).

The industry response to the study looks quite different. The engineers at the Association of Heating, Refrigerating, and Air-conditioning Engineers (ASHRAE)– who know a thing or two about temperature control standards in buildings- say that the authors have misinterpreted how the standards are actually set. They assert that thermal comfort criteria are based on extensive laboratory studies of both men and women. These studies find that when men and women do the same kind of sedentary work in the same type of clothing, there are no relevant differences in preferred temperatures across sexes.

To make sense of all of this, I went to find my Berkeley colleague Stefano Schiavon who studies indoor work environments and building energy consumption. Ask Stefano whether commercial office buildings in the US are kept too cold in the summer and you get an impassioned (he is Italian after all) Yes!!

By 3 degrees Celsius at least, he says. But, he argues, factors such as oversized HVAC systems – not sexist thermostats – are to  blame. For example, a temperature check across a sample of U.S. office buildings finds average summer temperatures in US office buildings are not only below the recommended ASHRAE standards, but colder in summer than in winter!

How much energy wasted?

Whereas office buildings are often cooled to around 72°F  in the summer, experts suggest  something in the range of 77°F can be maintained (assuming good air circulation) with no loss of worker satisfaction.  Lose the necktie, put on some linen shorts, and you have Japan’s “Cool Biz” campaign which recommends an 84°F set point for office air conditioners. 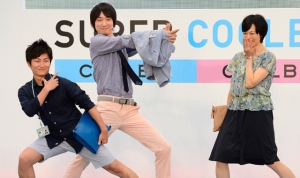 By my very crude calculations, if we apply this reduction across all air conditioned office space in the United States (estimated at 14,095 million square feet in 2012), this amounts to a reduction in electricity consumption of 11,300 GWh/year.[1]

Compared to total annual electricity consumption, this does not amount to much ( less than half a percent).  But the impact would be comparable with other climate change mitigation measures we get excited about. For example, the EIA estimates nationwide solar PV production in 2014 at  15,874 GWh (utility scale).  In other words, keeping indoor air temperatures too cool in the summer is working to offset hard won emissions reductions achieved elsewhere.

Too much of a good thing

Air conditioning at the office – when used in moderation – is a very good thing.  There is plenty of research demonstrating that air conditioning reduces mortality, boosts productivity, and makes us happier, more agreeable people.  However, in many American workplaces, it seems this good thing is being taken to a wasteful extreme.

We should be paying more attention to how we (over-) cool our commercial buildings. But it can be very hard to get people excited about energy efficiency and/or conservation.  Several new technologies (such as apps that help individuals control their cubicle climate) on the market make energy conservation more accessible and more fun. Between the stereotypical shivering female office worker and her gadget-loving male counterpart, this could lead to smarter cooling – and some energy savings- in our office buildings next summer.

12 thoughts on “Are We Over-Air Conditioned?” Leave a comment ›