The U.S., almost alone among developed economies, has operated its power system as a collection of balkanized fiefdoms. Evidence from around the country, from work by Mansur and White , and ongoing work by Steven Cicala,  indicates that merging utility system operations can be a big win economically by reducing the amount of fuel burned, improving network utilization, and increasing reliability. A more efficient system makes it easier to fully use varying wind and solar power sources, and lowers the cost of reducing pollution from fossil plants, as the Obama administration hopes to do with its recently announced Clean Power Plan.

This long and twisted road toward more rational operation of our regional electricity grid is now approaching a new milestone. The next major proposed step is full integration of both the day-ahead and real-time markets of the California Independent System Operator (ISO) with the areas operated by PacifiCorp.  Essentially, the California ISO market would expand to embrace power plants and consumers in five states. Such moves are really long overdue.

The ISO has already linked its market for “real-time” sales of electricity (up to approximately a half-hour ahead of when power is produced by power plants and used by consumers) with PacifiCorp.  This “energy imbalance market” (EIM) allows western utilities for the first time to transact power on a more real-time basis. A Nevada utility will 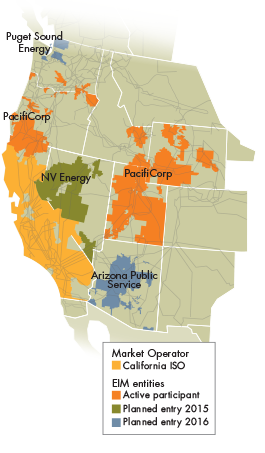 be the next member of the EIM, and utilities in Washington and Arizona are considering joining.  However, only some of the benefits of coordination can be gained in the last few minutes before power is produced and used. Only about 5% of the ISO’s volume is scheduled in the fifteen minute-ahead and five minute “real-time” markets of the EIM. Many decisions about how to produce power–for instance from slow moving large fossil fueled plants–and how to use it–for example to change the timing of shifts at a factory–need to be made twenty four hours or more ahead of time.  Thus the logical next step is full integration of the day-ahead, hour-ahead, and real-time markets through an expanded ISO.

So why would California not jump at such an opportunity? There have been two concerns raised. One is that expanding the California ISO would require some sharing of governance and policy decisions with other states.   A second is that tighter integration would harm the environment by somehow making the west more hospitable for coal-based power plants. We’ll address this second concern first.

While it is true that the PacifiCorp system, and much of the western U.S., leans more heavily on coal generation than does California, it is hard to imagine a scenario where ISO expansion increases coal output and several ways in which expansion would likely expand the role of renewable energy.   To understand why this is, one needs to understand what ISO’s do differently than other electric systems.

Utility systems have been trading power, albeit inefficiently, without ISOs for quite some time. California has imported almost a third of its power for decades, a greater fraction than any other state. Without an ISO, however, those trades can be time consuming and difficult to put together, and are vulnerable to the whims of a large transmission owner who may not want to share its grid. ISOs, like California’s, can provide an unbiased, transparent, and timely allocation of transmission resources that was impossible to achieve in the old informal trading regimes.

That means that, in the old world, transactions tended to involve relatively large and stable sources of power in order to make it worth the hassle. Large coal plants, which usually run flat out, have been able to make deals in this kind of ad-hoc environment. Life, though, was more difficult for renewable resources, which are smaller and subject to the vagaries of nature. Renewable resources require “balancing” services to fill in the fluctuations of their output, and these are much easier (and usually cheaper) to acquire in an ISO environment.    In this way, ISOs help renewables compete more successfully against fossil-fueled plants, including coal plants.

A second reason to expect that ISO expansion would not drive an increase in coal output is that western coal plants are already heavily utilized. This is especially true for PacifiCorp. Environmental Protection Agency data show that PacifiCorp’s coal plants were producing at three-quarters or more of their capacity in 2012; this fraction is typical for coal plants that are producing all they can, accounting for downtimes for maintenance and mechanical breakdowns. Therefore, even if California utilities were eager to buy coal output (which they are not), there is little extra supply to be provided right now.

On the other hand, there will be a growing amount of renewable generation coming online as a result of policies in California and other western states. ISO expansion would smooth the way for this extra renewable energy to be marketed in currently coal-heavy states.   There are many times, mainly in the middle of the day when solar panels are producing at their maximums, when supply is so much in excess that prices are negative, and users are actually paid to consume power.   This is because other power plants have to be operated in very inefficient ways to ensure that supply and demand are balanced throughout the day. As California moves towards meeting its 33% renewable electricity goal by 2020, and likely works toward a 50% goal by 2030, such periods will become much more frequent.   Studies show that large amounts of wind and solar power will need to be “spilled” at such times—that is, such plants will be turned down and produce less than they could. Policy makers and the public are rightly concerned about this waste.

There are triple benefits to being able to more easily export this excess power.  First, it will actually lower costs for Californians by improving the efficiency of those other plants. Second, it will lower costs for other states because they can reduce output from their conventional plants. Third, air pollution and greenhouse gas emissions will go down because California plants will operate more efficiently while plants elsewhere will operate less.

One way to estimate the impact of California’s renewable policy on the climate is to look at the energy sources likely to be displaced by renewable energy. A series of papers by Erin Mansur, Stephen Holland, and others, has estimated the marginal source of electricity that responds to increases in demand (say for electric cars) in different regions. They break down this response for California and the rest of the west.

Using their data, one can see that, on the margin, changes in demand in California have very little impact on coal output anywhere in the west.  On average, about 5-10% of a change in California demand in the early morning and less than 1% during mid-day, is met by Coal.   This implies that as we increase our renewable output, we will be displacing increasingly more efficient natural gas plants. Unless something changes, with more integration, that renewable output can get us much more carbon bang for the buck elsewhere. In particular, in the rest of the west, between 20 and 40% of a marginal change in demand is met by coal-based units. Therefore, exporting our renewables to the west (or promoting the development of renewables outside of California) would be much more likely to displace coal generation, roughly doubling the reduction in CO2 emissions.  More studies addressing the specific impacts on CO2 emissions are likely coming.

In sum, we think there are many reasons to believe that expanding power markets will be good for renewable energy and will reduce costs to consumers.   Speculation that coal plant pollution might temporarily increase because of greater trade should not stand in the way of achieving these benefits. This is especially true because it is more likely that pollution will instead decrease in the near term, and because it is widely agreed that integrating markets is essential for achieving all the economic and environmental benefits of renewable energy in the long term as state and federal environmental policy move our power sector towards sustainability.

The other concern about ISO expansion is the fact that California would have to share some decision making with representatives from other states. This should be embraced as an opportunity, not used as a barrier. For one thing, it is important not to overstate California’s control over the CAISO. While it operates as a state-chartered non-profit corporation, the CAISO, like any other electricity system operator is ultimately answerable to the Federal Energy Regulatory Commission. Nor is state control a guarantee against problems. Recall that California went through an electricity crisis with its own state chartered Power Exchange and ISO.

Second, and most importantly, dealing with the energy and climate challenges that are facing us today requires that California and other western states work together.  Electricity flow doesn’t stop at state borders, and nor do greenhouse gasses. The U.S. EPA’s Clean Power Plan encourages States to coordinate their climate policies, but it can also create perverse incentives that could result in smaller carbon reductions and higher costs. Such a disappointing outcome can be avoided if western states work together.

Consider the alternative. In the long run, what is the benefit to the climate of California, alone, achieving emissions reductions through means that intentionally make our electric system run less efficiently, raises costs, and essentially wastes a portion of our zero-carbon renewable production? That is not a model that is likely to appeal to other states and countries. In many dimensions, there is a pressing need for state-level policy coordination and an expanded ISO would provide an institutional setting in which that can happen. Let’s hope provincial concerns don’t trump the potential for game-changing reforms of power markets and air pollution regulation.

11 thoughts on “Can California Ignore its Neighbors?” Leave a comment ›