Climate change policy (or the lack of it) is finally becoming a mainstream issue in U.S. politics. A majority of the Democratic presidential hopefuls have come out in support of some kind of carbon price. The 116thth Congress is currently considering several proposals that would put a price on carbon. Last week, House Republicans met to discuss their climate change policy position. 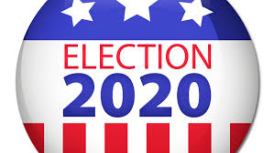 In some respects, we’ve been here before. Back in the early 2000’s, we were seemingly on the verge of some meaningful federal climate policy. RIP McCain-Lieberman. But this time feels different. For one thing, a majority of Americans now accept that we are causing the climate to change and we should be concerned:

Another positive development is the accumulation of empirical evidence. More than 40 countries have now adopted some form of carbon pricing. Years of experience from around the world have generated piles of data that we can use to understand how carbon pricing might impact the US economy.

On the downside, the political discourse has never been more polarized. It’s not just that the two sides can’t cooperate. We are living in different realities. In an election year, the political scrapping over what it would cost to address the climate change problem is bound to get ugly.  For a relatively tame preview, I’ve been looking north. Carbon pricing was an important issue in last year’s Canadian elections. Here’s a choice tweet from the Premier of my native province, Ontario.

Would a carbon tax be seriously detrimental to the U.S. economy (the premise of the anti-carbon tax resolution passed by House Republicans)? To shed light on that question, let’s unpack the latest research on the macroeconomic impacts of real-world carbon pricing.

Last week, Gib Metcalf and Jim Stock released a paper that investigates how the introduction of carbon taxes in Europe has impacted the growth of GDP and employment. Europe is an interesting empirical laboratory in the sense that approximately half of the countries have introduced some form of carbon pricing (in addition to the EU ETS) and the other half have not:

This carbon tax patchwork provides an opportunity to construct comparisons of outcomes across carbon tax adopting and non-adopting countries.

Of course, we need to be really careful when drawing these comparisons. For one thing, a country’s decision to pursue a carbon pricing policy is not random. Comparisons between tax adopters and non-adopters can be confounded by other differences that can determine growth trajectories over time (such as differences in economic composition).

Another concern: Economic outcomes in countries that choose not to adopt a carbon price are likely impacted by the carbon pricing choices of their neighbors. The effects of a carbon price could easily spill over into the untaxed areas if economic production relocates to escape the tax. If this relocation is happening, it should bias these authors towards finding a negative effect of the tax on GDP and employment growth.

The authors take a number of approaches to addressing these concerns. The headline result: they find no evidence that carbon taxation has had damaging impacts on GDP or employment in countries that have implemented a carbon tax (relative to those that have not).

The figure below summarizes the estimated effect of a $40 carbon tax increase on annual GDP growth during the year the tax was imposed, and in each of the six years thereafter. The shaded area indicates the range of impacts the authors cannot confidently rule out. They actually estimate a positive effect on GDP growth, but estimates are not super-precise and they cannot rule out a zero effect. What they do not find is evidence that a carbon tax reduces GDP growth. 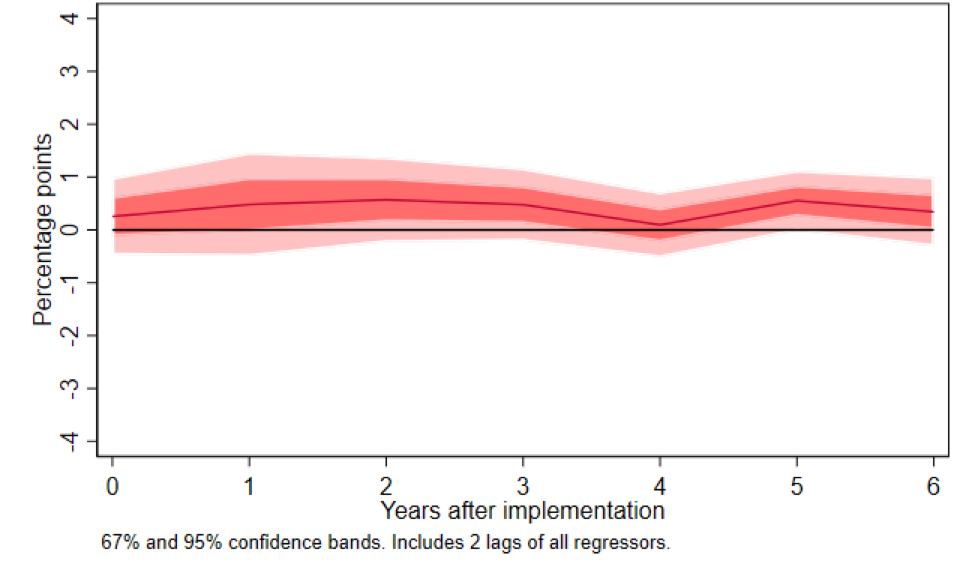 The authors reach similar conclusions when they compare annual employment growth in the years after the tax is introduced. They find a small initial bump up, then basically no effect on employment growth one way or the other: 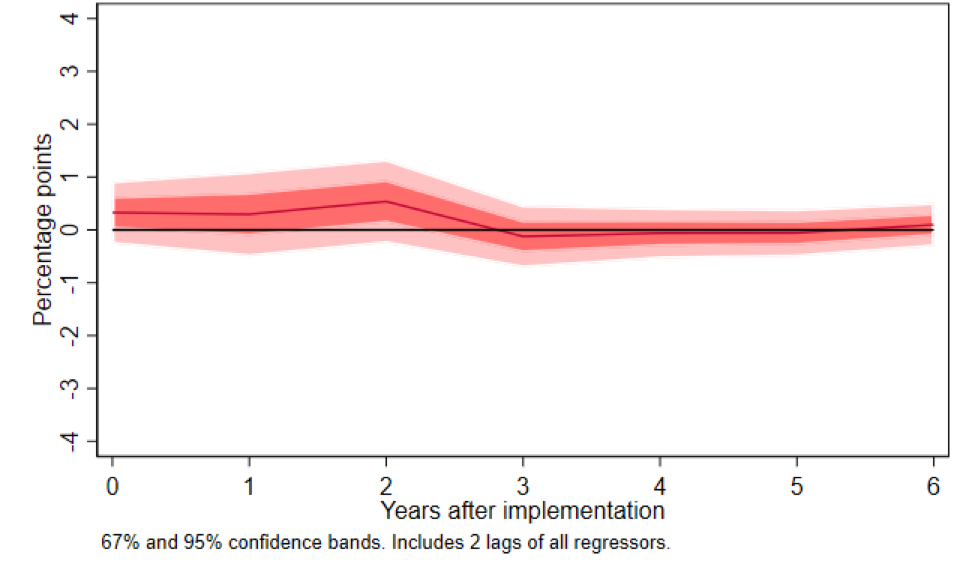 These estimates are not surprising to most environmental economists. Calibrated economic models generally predict very modest – or no – impacts on GDP and employment. Recent empirical analysis of real-world impacts is also consistent with these projections.  And not just in Europe. For example, research on British Columbia’s carbon tax finds no evidence of adverse impacts on aggregate employment.

These findings may align with economists’ expectations. But they contrast starkly with political claims used to fuel opposition. And for the voter on the street, the idea that a carbon tax won’t significantly slow the economy down might sound like fake news. What’s going on?

Here are two important considerations that don’t fit neatly into a pithy tweet.

First, when you put a price on carbon to drive down emissions, you also raise revenues. These revenues can be put to productive use. The figure below shows lots of variation in how these revenues are allocated (using data from 2013/2014). Some jurisdictions`recycle’ revenues to the most impacted industries and households. Some revenues are used to offset taxes on labor and capital which can boost employment and productivity.  Some revenues are used to accelerate clean technology development. Targeted spending of tax revenues could help explain why the red lines in the graphs above suggest a positive boost to growth, if anything.

Second, even if macro-economic indicators such as GDP and aggregate employment are basically unaffected by carbon pricing, impacts on certain sectors will be significant. The whole point of carbon pricing is to help transition the economy onto a more ecologically sustainable path. There will be households and firms on the losing side of this transition. For example, behind a small estimated increase in aggregate employment following the introduction of the BC carbon tax, researchers found an employment boost in clean service industries and decreased employment in some carbon-intensive industries. Carbon tax revenues can and should be used to mitigate the economic impacts on those most affected. This is not an easy problem. But it’s one that economists are thinking hard about.

Heading into the election season, there are a number of contentious issues that will have to be settled at the ballot box. Pricing our greenhouse gas emissions should not be one of them. Countries around the world have implemented carbon pricing. In places like Europe, the decision to do so did not follow a strict left-right divide.

I get it that the value of evidence has deteriorated in this era of post-truth politics. But I have to believe that real-world evidence on carbon pricing impacts still has a role to play. The available evidence from our trading partners and competitors shows that carbon pricing has no measurable negative impact on economic growth and aggregate employment. It is time for the US to de-politicize climate change and put a price on carbon, no matter who ends up in the White House.

2 thoughts on “Would a Carbon Tax Hurt the Economy?” Leave a comment ›