Economists have long complained about Fuel Efficiency standards. Are we happy now?

The past 50 days felt like the beginning of a game of environmental policy Jenga. The new administration is starting to pull pegs from the tower of environmental and energy regulations slowly built up over the past 50 years. Whether this tower will crumble is a legal question, which I am not qualified to comment on, so I’ll stick to economics. 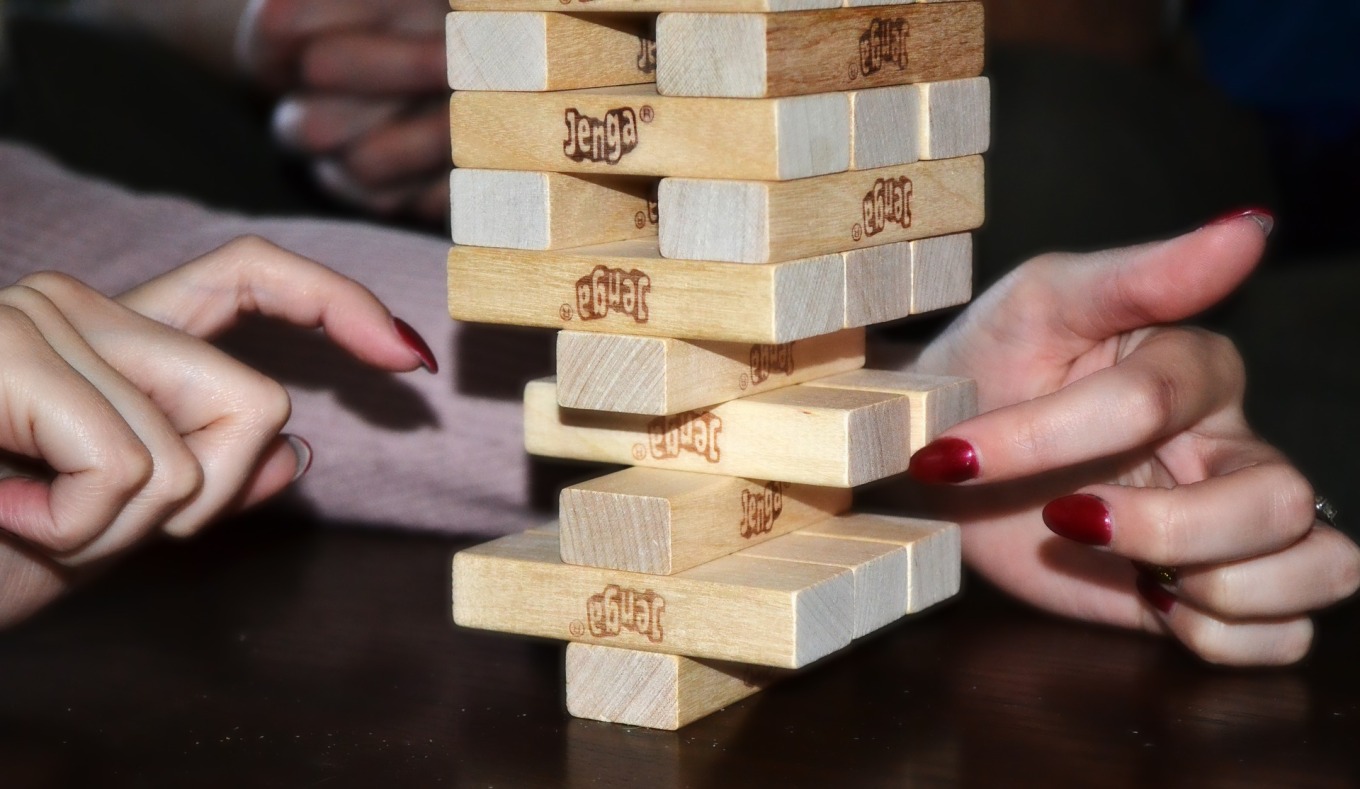 Maybe the most significant development is President Trump’s call for a review of the Corporate Average Fuel Economy standards, which were updated under the Obama Administration requiring the auto industry to deliver a fleet average of at least 54.5 mpg by 2025. This means that the average new car sold would achieve roughly the fuel economy of a current day Toyota Camry Hybrid. This is no doubt ambitious and US manufacturers have complained publicly about the significant costs this would entail, which would be largely passed through to consumers (or so they claim).

Let’s think about the economics of standards for a minute. Standards come in as many flavors as Ben and Jerry’s ice cream. The CAFE standard was introduced after the 1973-4 oil embargo and is so complex that a number of my colleagues are spending significant parts of their careers understanding it and its consequences. The most recent version of the standard regulates vehicles by class (passenger cars vs. light trucks) and within class by footprint (trackwidth times wheelbase). The table below shows what the proposed standards are trying to achieve (Source: Wikipedia. Sue me.) 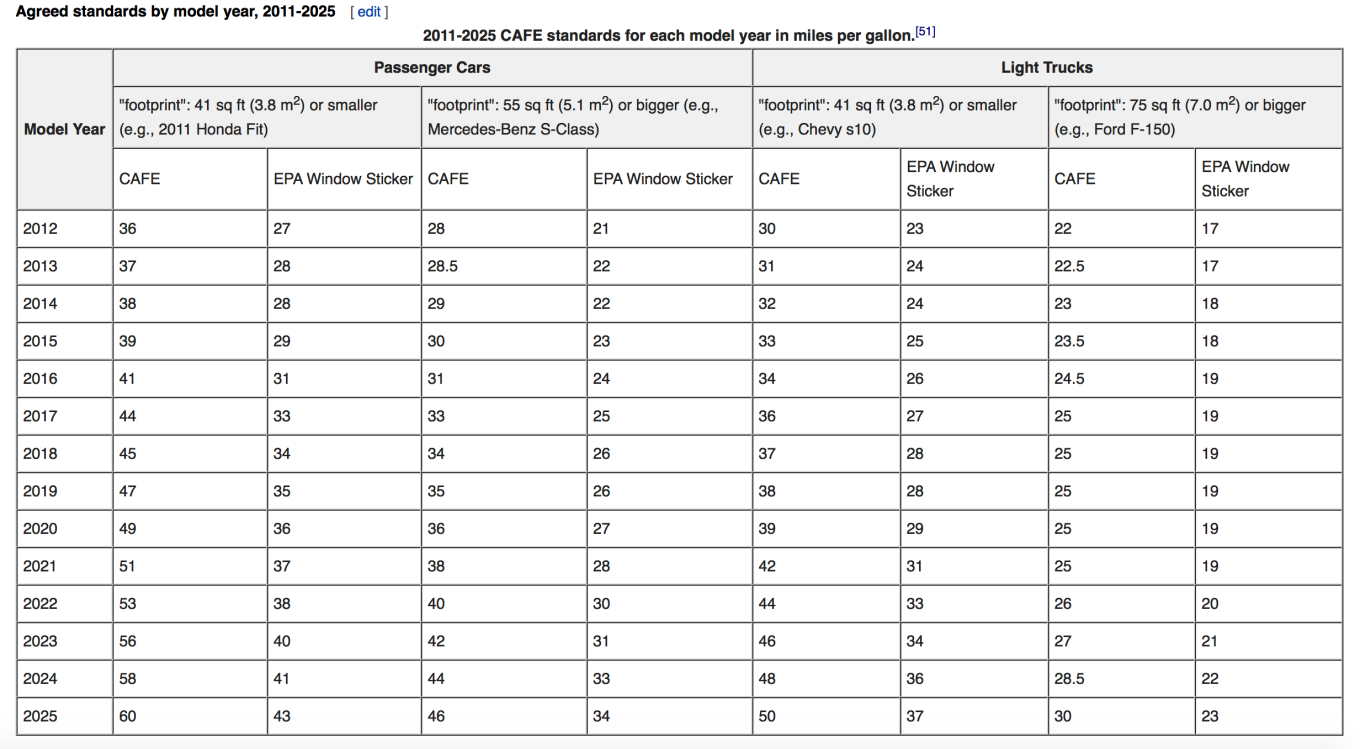 If you do the back of the envelope calculation, this is equivalent to a roughly 28% improvement in gallons per mile (the right measure) from the 2017 model year to 2025 for all passenger cars and small footprint light trucks and a 17% improvement for the bigger “light” trucks. This sounds like a lot. And the car industry is crying wolf. A number of think tanks are immediately translating this burden into massive domestic job losses. However, if you read the collected works of the brilliant former EI student Chris Knittel, you will know that auto manufacturers have funneled technical progress into more power rather than into more fuel efficiency. For example, a 1980 Honda Civic in its base model had 55 horsepower which got 34 mpg. The 2017 base model has 158 horsepower and gets roughly 35 mpg. Same fuel economy – thrice the power. The argument has forever been: “Power. It’s what consumers demand”. Chris’ paper suggests that the historical improvements in fuel efficiency amounted to about 2% per year. The Obama goals are about 3% a year. So an acceleration would be required, yet it’s not a moonshot.

The issue is of course that emissions of greenhouse gases and local pollutants from the transportation sector in the United States account for 26% of greenhouse gas emissions and a significant share of local pollutants – toxics and particulate matter. It is well understood that there is an underlying market failure, whereby consumers do not pay for the full social cost of their actions resulting in excessively large emissions of these damaging compounds.

Consumers left alone have no incentive to do the right thing. The regulator is supposed to step in here and provide consumers with incentives to make socially optimal decisions. An emissions tax is the first best thing to do. In its best version there would be a separate tax for the local pollutants and the global pollutant. We would cheer loudly.

A gasoline tax is second best. Half of us would clap.

A very distant third+ best is a standard, such as the CAFE regulation discussed above. Hence the average economist would have gladly done away with these standards in exchange for the more efficient policy instruments. CAFE standards have significantly reduced emissions of greenhouse gases by increasing the fuel economy of the fleet. One can make nice arguments about how this has benefitted the US in the form of less reliance on foreign oil as well. However, it is also clear that these standards are an expensive and inefficient way to regulate these emissions.

So, you ask, do all economists hate all standards? The answer is no. At least for this economist, there are many standards that make a great amount of sense. Take for example appliance standards. The individual consumer frankly has no idea how much electricity a refrigerator consumes. In fact, I would wager that the average person would have no idea what units electricity is measured in for billing purposes and what price they pay (I am not even hoping for knowledge of marginal price). Since the customer does not observe this information, (s)he has no incentive or ability to make an efficient investment decision when it comes time to buy that new fridge. Appliance standards set targets that regulate the energy efficiency of these durable devices, so we get an average efficiency of appliances moving us closer to a privately and socially optimal level of electricity consumption. So, in settings where the efficiency of a device is not observable, I am gung ho for technical standards (that optimally would also take into account the extensive margin – size – of the device as Ito and Sallee point out).

For gasoline, this is not the case. The vast majority of consumers know how many miles their car goes on a tank and how much it costs to fill a tank. They hence observe the efficiency of the equipment when they purchase it. It is on a big label on each vehicle in fact. This is admittedly also true of refrigerators. However, in real world usage situations where your teenager floors the car at each traffic light and opens the refrigerator door 48 times a day to see what’s in there, it is much easier to gauge the car’s consumption of gas than the fridge’s consumption of electricity.  Many of us would argue it would be much more effective to price the emissions (and safety) externalities of vehicles directly instead of regulating them via an inefficient fuel economy standard.

But, and this is a big “but.” Like HUGE. If the choice is between a CAFE standard and no regulation, I might very begrudgingly take the CAFE standard. I would assume that not all  environmental economists would agree on this point, since CAFE is an extremely expensive way of regulating carbon emissions. Jacobsen (AEJ 2013) finds that the old CAFE standards cost a whopping $616 per ton of CO2 abated. But it does not only regulate carbon emissions, it indirectly also controls vehicle weight to a certain degree, which Michael Anderson and I show has significant external costs in terms of fatality and injury risk in collisions. CAFE is far from efficient, but it does regulate the externality, which is massive. Maybe the most powerful, but least well documented argument in favor of CAFE is it will somewhat accelerate technological progress, and some of that will spill over into the rest of the world’s markets. And the rest of the world is buying a boatload of cars.

Abandoning any kind of emissions regulation from the transport sector is simply wrong. It’s basic economics. While I see no chance for a reasonable carbon tax (say $39 ton or higher), I would hope that reasonable voices on the hill would continue to push for one.  In the meantime, CAFE standards to me are better than no regulation.

I like a good game of Jenga. But when the tower crumbles, we will bury future generations’ welfare under a pile of pollution. This is not what we should be doing.

12 thoughts on “A Tale of Two Standards” Leave a comment ›