In a recent Saturday Night Live episode, Baldwin-as-Trump is casting about for clever ways to get Mexico to pay for the border wall. But with each attempt, the joke is on him, and Americans are left footing the bill. 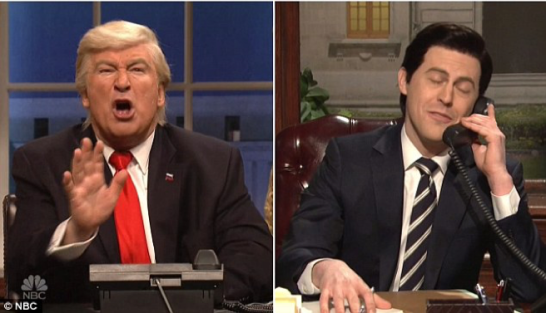 The following week, in what could be construed as life-imitates-art, White House Press Secretary Sean Spicer announced a plan to finance the wall: Use the Congressional Republicans’ proposed tax reform “as a means to tax imports from countries that we have a trade deficit from, like Mexico”.

In the wake of this announcement, there’s been much speculation about how this proposal would affect the US economy. Energy markets have been getting lots of attention because the petroleum sector could be particularly impacted. Some analysts and media reports are projecting gasoline prices increases on the order of 30-40 cents per gallon. But proponents of the plan –including some world-class economists– maintain that these price increases are illusory.

Before unpacking these back-and-forth disagreements about what the impacts would/would not be, let’s quickly review what’s being proposed (and why).

Republicans are laying the foundations for a major overhaul of the tax code. The Ryan-Brady GOP plan, “A Better Way: Our Vision for a Confident America”, proposes a number of substantial changes in how businesses pay taxes. The current system taxes corporate income – net of costs of goods sold, wages, depreciation, etc.-  at a relatively high marginal rate of 35%. The new proposal would replace this tax, which many view as excessively burdensome, with a ‘destination-based cash-flow tax’ (explained in more detail here). Cash-flows (revenues net of wages and asset purchases which can be written off immediately) are taxed at a lower rate of 20%.

All else equal, this reduction of the corporate tax rate would significantly reduce government revenues. Not good news when you are trying to finance a border wall, increase defense spending by $54 billion, etc. This is where the border adjustment tax (BAT) comes in.

The BAT makes two important ‘adjustments’. First, businesses that import goods and intermediate inputs are not able to deduct these import costs. Second, businesses that export goods to other countries are not required to pay tax on revenues from foreign sales. If the US is running a large trade deficit (as it is now), revenues earned via taxing imports will exceed revenues lost from exempting exports. The Tax Policy Center has estimated that the BAT would raise $1.18 trillion over 2016-2026.

What would BAT do to domestic gas prices?

If you are a big net importer, you are not feeling good about this BAT idea.

A recent report by energy economist Phil Verleger looks in detail at how these proposed changes could impact U.S. markets for petroleum products. On the importing side, Verleger assumes that refiners who rely on foreign-sourced inputs would see a 25% increase in import prices under the BAT. Facing this kind of cost increase, refiners would go looking for domestic sources. But domestic oil producers are under no obligation to supply the domestic market. If domestic revenues are taxed while export revenues are exempt, they will demand a higher price from domestic refineries to compensate for the tax disadvantage of selling at home versus abroad. Taken together, Verleger estimates that the average retail price of gasoline would increase by 13% (approximately 30 cents a gallon). Other industry analysts have reached similar conclusions.

One important thing to note about these kinds of analyses is that, to keep things tractable, they hold some important variables fixed. The Verleger study is careful to note that accounting for all of the various channels the BAT could work through “would be complex and far reaching and would likely differ substantially from the petroleum specific calculations presented in this paper.” But this begs the question: how do projected impacts change if key variables are turned loose?

What gives with this kind of BAT?

On the face of it, it seems like this border adjustment tax should benefit exporters and hurt importers (who will then pass that hurt through to you the consumer). But it’s more complicated than that because the BAT is designed to tax all imports and exempts all exports. Purchasers of our exports finance their purchases by selling us imports. If they sell us less, their purchasing power drops.

In a textbook model of how these pieces fit together, the BAT would trigger a currency adjustment, and the US dollar would appreciate to fully offset any real effects on import and export prices. To see how this works, suppose a US refinery is buying oil from Mexico at a price of 1000 pesos per barrel. Once the BAT is introduced, the 25 percent tax on imports raises this cost to 1250 pesos/barrel (all else equal). But if the dollar appreciates by 25% as some are predicting, prices paid for Mexican imports (in US dollar terms) would be unchanged. In other words, in theory, the BAT would not penalize imports or favor exports. Terms of trade effects would be undone by the currency adjustment.

Paul Ryan has declared it “obvious and mathematical that a currency adjustment would occur”. However, building on our it’s-more-complicated theme, the theory that yields this elegant and mathematical result conditions on some strong assumptions. Federal Reserve Chairwoman Janet Yellen is among those questioning these assumptions, and the real-world considerations that this theory ignores. Examples include factors that limit the pass-through from currency changes into U.S. import prices and the reactions of other countries who can impose their own import taxes in retaliation.

There has to be a better “Better Way”

There are many reasons to think that exchange rate adjustment to the proposed BAT will be slow and incomplete. If this is the case, the prices consumers pay for gas –and imported goods from avocados to zippers– will increase. The economic impacts could be significant and negative.

Reducing corporate taxes will encourage good things like innovation and investment in economic growth. But it would also reduce tax revenues. To make up the shortfall, we need to find something else to tax.  With the GOP Better Way proposal, we run a real risk of penalizing other good things, namely all imported goods and domestic consumption. This would impose real costs on American consumers and the economy as a whole.

Ideally, we would reduce taxes on corporate income and raise needed revenues by penalizing damages versus other goods. Another Republican tax proposal, one that has received relatively less attention than the GOP plan, aims to do just that. The Conservative Case for Carbon Dividends proposes to tax domestic carbon emissions. It would incorporate a different kind of border adjustment, one that is designed to tax the carbon emissions associated with imports (versus the imports themselves).  Under this proposal, some consumer prices (including gas prices) would rise. But these increases would reflect real social costs and trade-offs, versus distortions imposed for the sake of revenue generation. Now that sounds like a better way.

4 thoughts on “How Would Energy Prices Adjust to the Border Adjustment Tax?” Leave a comment ›