Photo by chuttersnap on Unsplash

In my new working paper and cool accompanying video released today, I assess how international trade policies affect climate change. I ask: how and why do tariffs and trade policies like quotas differ between clean and dirty goods?

Two ideas motivate this question. First, most researchers believe that climate change policy is less stringent than it should be. Global trade policy could be a powerful lever for change since around a quarter of the world’s carbon dioxide (CO2) is emitted in the supply chain supporting international trade. Imposing taxes on traded goods (i.e., tariffs) that are proportional to CO2 has the potential to help address climate change.

Second, many countries have proposed pairing climate change policy with a tariff on CO2-intensive traded goods (i.e., a “carbon border adjustment” or “carbon tariff”). In this new paper, I show that countries’ trade policies essentially already have carbon tariffs, but these policies are subsidizing CO2 emissions instead of penalizing them.

A New Fact: The Environmental Bias of Trade Policy

My paper finds that existing tariffs are lower on dirty goods (carbon-intensive goods) and tariffs are higher on cleaner goods (less carbon-intensive goods). This pattern appears in most countries and years, and also for other trade barriers like quotas. In Figure 1, each circle represents a specific industry and country in the global economy. The downward-sloping red line shows that dirtier industries face lower tariffs, which is the opposite of a carbon tariff. 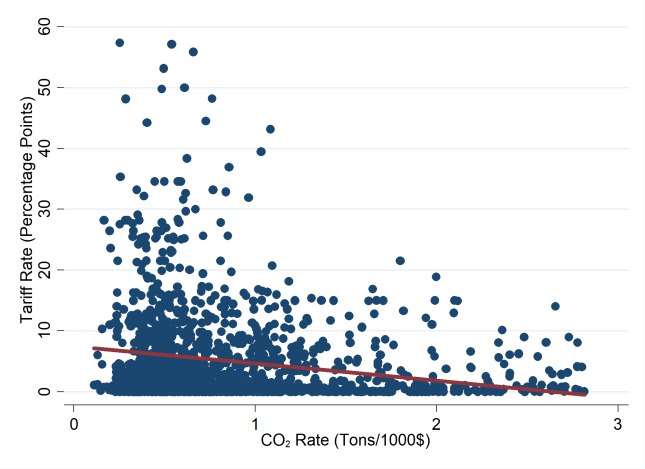 Note: data represent all countries in the world. Each circle is one industry in one country. Red line is the linear trend.

This environmental bias is large. By putting heftier trade barriers on cleaner goods, the world is on average imposing an implicit subsidy of $85 to $120 per ton of CO2. In other words, trade barriers are rewarding CO2 emissions, and by a large amount. By contrast, many researchers who study climate change think we should have a carbon tax (not subsidy) of $40 to $50 per ton (narrative version, technical version).

Imagine two bundles of goods that arrive at a port somewhere in the world and suppose producing one of these bundles emitted an additional ton of CO2. The dirtier bundle will face $85 to $120 less in mean tariffs and other trade barriers.

The paper shows that the 2018-9 trade war, which raised tariffs on some dirty industries like steel and aluminum, only slightly attenuated this pattern.

Figure 2 shows that, ironically, some of the countries with the largest trade-policy subsidy to CO2 are places like Sweden and Germany that traditionally care the most about the environment. Some of the countries with the smallest trade-policy subsidy to CO2, like Saudi Arabia and Iran, are traditionally less concerned about the environment.

Figure 2: Difference in Trade Policies Between Clean and Dirty Goods, by Country

Summed across countries, this amounts to a global implicit CO2 subsidy of $550 to $800 billion per year. As a benchmark, direct subsidies to fossil fuel consumption, such as Venezuela’s subsidies to motor fuel or Saudi Arabia’s oil subsidies, have a global total of $530 billion.

Why? The Influence of Lobbying on Trade and Environmental Policies

I arrive at a simple explanation for the bias: industries convince governments that they need cheap inputs.

I consider many explanations for why dirty industries receive low levels of protection, such as rates of political contributions, unionization, and worker wages.

It turns out that more upstream industries are systematically dirtier. The three most upstream manufacturing industries in the U.S. economy are also three of the dirtiest—petrochemicals, copper smelting, and aluminum smelting. 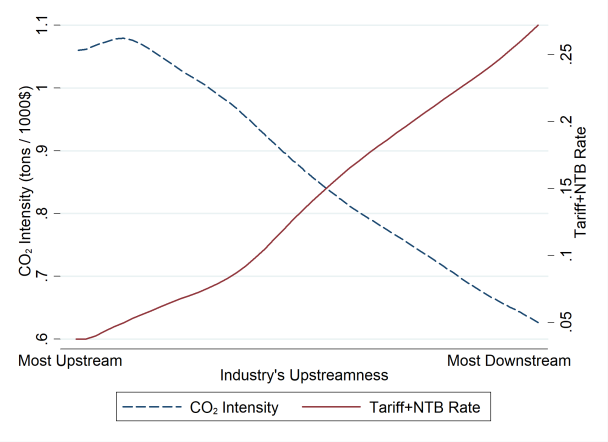 Note: NTB stands for non-tariff barriers, such as quotas. Data represent all countries in the world.

Figure 4: Copper Refining and Smelting is Upstream, Dirty, and has Low Tariffs; Sunglasses Manufacturing is Downstream, Clean, and has High Tariffs 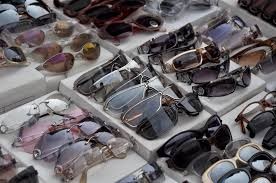 What Does It Add up to?

Using a mathematical model of trade, production, and pollution for all goods in all countries, I find that if countries had similar trade policy for clean and dirty goods, global greenhouse gas emissions would fall by about the same amount as the effect of two of the world’s largest actual or proposed climate change policies—the European Union’s Emissions Trading System (a cap-and-trade market for CO2) and the Waxman-Markey Bill (a 2009 US cap-and-trade plan). This effect is similar whether countries change trade policy for all goods to the level currently faced by clean industries, or dirty industries, or the average; the key feature is for countries to impose similar trade policies on clean and dirty industries.

Imposing similar trade policies on clean and dirty goods is among the only environmental policies which may appeal to both dirty industries and environmentalists. These strange bedfellows might support this policy because it can maintain protection of dirty industries (at least relative to clean industries) while decreasing global CO2 emissions.

Climate change and the environment are rarely part of the debate over tariffs and other trade barriers. The evidence in this paper shows how making the environment part of those policy conversations could provide large benefits.