While many Californians are spending August burning fossil fuels to travel to vacation destinations, the state legislature is negotiating with Gov. Brown over whether and how to extend the California’s cap-and-trade program to reduce carbon dioxide and other greenhouse gases (GHGs).   The program, which began in 2013, is currently scheduled to run through 2020, so the state is now pondering what comes after 2020.

The program requires major GHG sources to buy “allowances” to cover their emissions, and each year reduces the total number of allowances available, the “cap”.  The allowances are tradeable and their price is the incentive for firms to reduce emissions.  A high price makes emitters very motivated to cut back, while a low price indicates that they can get down to the cap with modest efforts.

Before committing to a post-2020 plan, however, policymakers must understand why the cap-and-trade program thus far has been a disappointment, yielding allowance prices at the administrative price floor and having little impact on total state GHG emissions.  California’s price is a little below $13/ton, which translates to about 13 cents per gallon at the gas pump and raises electricity prices by less than one cent per kilowatt-hour. 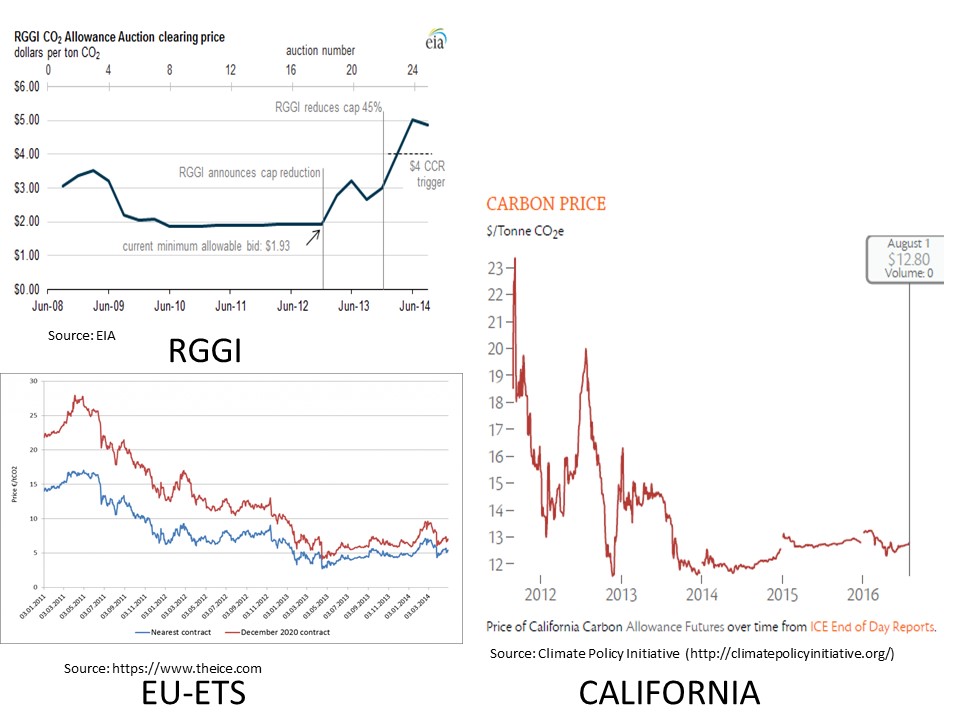 And it’s not just California. The two other major cap-and-trade markets for greenhouse gases – the EU’s Emissions Trading System and the Regional Greenhouse Gas Initiative in the northeastern U.S. — have also seen very low prices (about $5/ton in both markets) and scant evidence that the markets have delivered the emissions reductions.  In fact the low prices in the EU-ETS and RGGI have persisted even after they have effectively lowered their emissions caps to try to goose up the prices.

In all of these markets, some political leaders have argued the outcomes demonstrate that other policies – such as increased auto fuel economy and requiring more electricity from renewable sources – have effectively reduced emissions without much help from a price on GHGs. That view is partially right, but a study that Jim Bushnell, Frank Wolak, Matt Zaragoza-Watkins and I released last Tuesday shows that a major predictor of variation in GHG emissions is the economy.  While emissions aren’t perfectly linked to economic output, more jobs and more output mean generating more electricity and burning more gasoline, diesel and natural gas, the largest drivers of GHG emissions.

Because it is extremely difficult to predict economic growth a decade or more in the future, there is huge uncertainty about how much GHGs an economy will spew out over long periods, even in the absence of any climate policies, what climate wonks call the “Business As Usual” (BAU) scenario.

If the economy grows more slowly than anticipated — as happened in all three cap-and-trade market areas after the goals of the programs were set – then BAU emissions will be low and reaching a prescribed reduction will be much easier than expected.  But if the economy suddenly takes off — as happened in the California’s boom of the late 1990s — emissions will be much more difficult to restrain.  Our study finds that the impact of variation in economic growth on emissions is much greater than any predictable response to a price on emissions, at least to a price that is within the bounds of political acceptability. 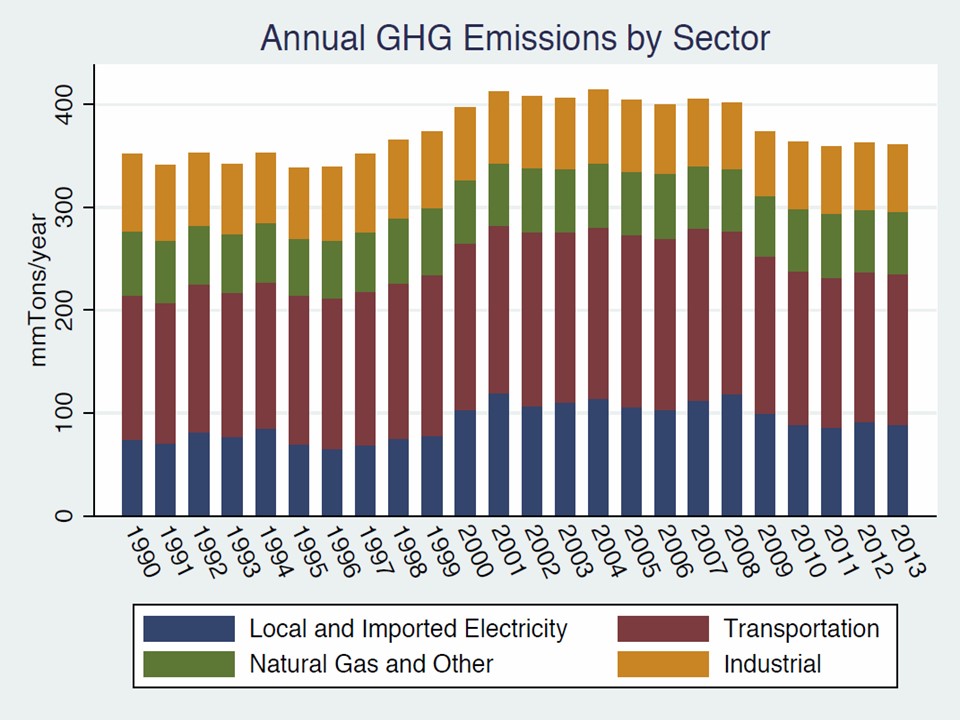 California emissions since 1990 have fluctuated with economic growth

Our finding has important implications for extending California’s program beyond 2020.     If the state’s economy grows slowly, we will have no problem and the price in a cap-and-trade market will be very low.  In that case, however, the program will do little to reduce GHGs, because BAU emissions will be below the cap.  But if the economy does well, the cap will be very constraining and allowance prices could skyrocket, leading to calls for raising the emissions cap or shutting down the cap-and-trade program entirely.

Our study shows that the probability of hitting a middle ground — where allowance prices are not so low as to be ineffective, but not so high as to trigger a political backlash — is very low.  It’s like trying to guess how many miles you will drive over the next decade without knowing what job you’ll have or where you will live.

So, can California’s cap-and-trade program be saved? Yes. But it will require moderating the view that there is one single emissions target that the state must hit. Instead, the program should be revised to have a price floor that is substantially higher than the current level, which is so low that it does not significantly change the behavior of emitters.   And the program should have a credible price ceiling at a level that won’t trigger a political crisis.  The current program has a small buffer of allowances that can be released at high prices, but would have still risked skyrocketing prices if California’s economy had experienced more robust growth.

But should California’s cap-and-trade program be saved?  I think so.  My first choice would be to replace it with a tax on GHG emissions, setting a reliable price that would make it easier for businesses to plan and invest.  But cap-and-trade is already the law in California and with a credible price floor and ceiling it can still be an effective part of the state’s climate plan.

Putting a price on GHGs creates incentives for developing new technologies, and in the future might motivate large-scale switching from high-GHG to low-GHG energy sources as their relative costs change.  The magnitudes of these effects could be large, but they are extremely uncertain, which is why price ceilings and floors are so important in a cap-and-trade program.  With these adjustments, California can still demonstrate why market mechanisms should play a central role in fighting climate change while maintaining economic prosperity.