We recently added a new member to our family. Since I have a tendency to look at the world through an energy lens, I’ve being wondering, what is the likely energy and climate change impact of our family expanding the global population by one? And more broadly, what is the current thinking about how global population trends will affect greenhouse gas emissions?

Within our household the impact is apparent. We’ve been running the heater more than usual to make sure the baby isn’t cold at night. We’re doing more laundry, thus using more natural gas and electricity. We’re also consuming more—diapers and baby toys. In other words, we’re directly and indirectly, through our consumption of goods and services, using more electricity, oil and gas. The little squirt is racking up a significant greenhouse gas deficit already!

Ah, but our daughter is not an average American, she’s a Californian. According to the US Energy Information Administration’s (EIA’s) latest state-level analysis California per capita greenhouse gas emissions are 45% below the national average. If she had been born in Texas, where I grew up, the statistics would suggest her contribution would have been 45% above the national average.

Is it appropriate to look to averages like these to determine the environmental impact of expanding the population? 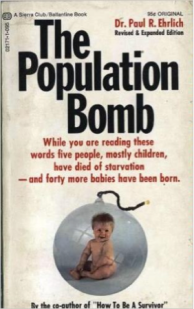 If you take this analysis at face value, policymakers wanting to address climate change should not only promote policies that reduce the amount of greenhouse gas generated by energy, but also push policies that reduce population and economic activity. That sort of narrow logic, however, ignores all the other ways in which growing populations and economies improve human welfare, and has, fortunately, fallen out of favor. (For an excellent history of the debate between Paul Ehrlich and his critics check out Paul Sabin’s 2014 book The Bet.)

In the early 1990’s, an update of this analysis by Dr. John P. Holdren, President Obama’s current Director of the White House Office of Science and Technology Policy, used a similar, simple model to conclude that, globally, population growth from 1850 to 1990 was responsible for 52% of energy growth, with the remainder being attributed to a growth in per capita energy use.

As far as I can tell, unraveling what’s causing what among all these factors is extremely difficult. In some cases these papers imply causal relationships, but I’m skeptical that we really understand these interactions yet. I hope to see more vigorous research in this subject area because I believe that policymakers addressing climate change should try to understand demographic trends.

First, the overall projections. The United Nations Population Division develops a set of widely used population projections. A supplemental probabilistic analysis published in Science projects that global population will grow from 7.2 billion people in 2014 to between 9 billion and 13 billion in 2100, with a 95% probability.

The difference in projections between continents is especially remarkable. Asia, the most populous continent, could see a peaking population mid-century, but Africa is projected to triple or even quintuple in population. So, while today’s emissions per capita in Africa are lower than anywhere else in the world, the aggregate emissions from Africa could grow dramatically over the century, even more so if per capita emissions converge with higher income countries.

One takeaway is that policies and technologies that are effective in Africa will have a tremendous impact over the course of the century. Catherine, for one, is exploring important issues related to energy use in Africa (here, here and here). Also, as Lucas explored last week, getting energy prices right is important, especially before countries’ get too far down the path of investing in inefficient automobiles and other capital stock.

Second, policymakers should consider how the characteristics of the global population are changing, and how these characteristics vary between countries. The World Bank tackled these trends in its latest Global Monitoring Report. The report describes how children have represented a shrinking share of the population since the late 1960s and working age adults’ share of the population peaked in 2012. Adults aged 65+, on the other hand, represent a growing share.

However, Africa diverges from the overall trend. Children and working age adults still represent a growing share of the population. Africa may eventually converge towards global aging trends, but it isn’t there yet.

In higher income countries with aging populations policymakers will need to pay more attention to 65+ energy consumers, and how they may differ from the average consumer. For example, income-tested subsidy programs that disregard overall wealth capture disproportionate numbers of older adults. Some of these programs encourage inefficient use of energy by setting lower prices for energy rather than transfers to pay for a certain basic level of energy use. Programs aimed at the poor should be better targeted to those they’re intended to help and also consider any negative impacts on the environment. Improving the energy efficiency of low-income senior housing programs could also be an important use of resources long term.

Also, energy use within sectors like healthcare could become more significant and is ripe for technological innovation that focuses on energy conservation. Policy and technology should turn attention to these kinds of problems and opportunities.

On the flip side, in lower income countries, especially those in Africa, policymakers should keep in mind that populations are younger and will remain that way for quite some time. Prioritizing access to the latest energy innovations for young people there will have long lasting effects. For example, energy efficiency within rapidly expanding mobile phone networks will be important.

Of course our new daughter will be hearing a lot about the importance of being a thoughtful energy user. We’ll also have to get her some carbon offsets for her first birthday to make her feel better.

Andrew Campbell is the Executive Director of the Energy Institute at Haas. Andy has worked in the energy industry for his entire professional career. Prior to coming to the University of California, Andy worked for energy efficiency and demand response company, Tendril, and grid management technology provider, Sentient Energy. He helped both companies navigate the complex energy regulatory environment and tailor their sales and marketing approaches to meet the utility industry’s needs. Previously, he was Senior Energy Advisor to Commissioner Rachelle Chong and Commissioner Nancy Ryan at the California Public Utilities Commission (CPUC). While at the CPUC Andy was the lead advisor in areas including demand response, rate design, grid modernization, and electric vehicles. Andy led successful efforts to develop and adopt policies on Smart Grid investment and data access, regulatory authority over electric vehicle charging, demand response, dynamic pricing for utilities and natural gas quality standards for liquefied natural gas. Andy has also worked in Citigroup’s Global Energy Group and as a reservoir engineer with ExxonMobil. Andy earned a Master in Public Policy from the Kennedy School of Government at Harvard University and bachelors degrees in chemical engineering and economics from Rice University.

8 thoughts on “Our Newest Energy Consumer” Leave a comment ›