Last week was spring break at UC Berkeley, so I took a few days off for a very pleasant vacation, walking by the ocean with friends and enjoying the beauty of California. As a result, I wasn’t able to be at the hearings on gasoline prices in the California State Senate last Tuesday. The state has seen a price spike over the last month that at one point drove pump prices to a dollar above the rest of the country.  We’re used to paying a bit more for gas here — due to higher taxes and the cleaner-burning fuel used only in California — but the difference is usually around 30-40 cents.

Though I missed last week’s hearings, I’ve been at enough legislative sessions on gas price spikes (and read news reports on this one) to have a pretty good guess at what went on.

Some consumer groups and left-leaning politicians confidently accused Big Oil of colluding, manipulating California’s gasoline prices, and gouging drivers.  Then industry representatives and right-leaning politicians responded with equal certainty that recent price spikes are the result of California regulations that since 1996 have required a gasoline blend used nowhere else in the world. 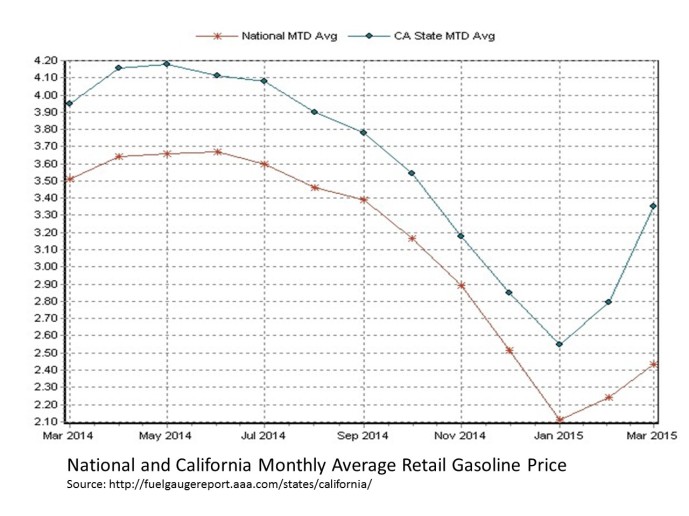 In a blog post a couple years ago, I explained why they are both wrong.  The accusers don’t have evidence that producers are artificially restricting output to drive up prices; real scarcity could completely explain the state’s higher gas prices and occasional spikes.  But the defenders who are claiming that the price fluctuations reflect only competitive market dynamics also have no proof.  In fact, since I wrote that post in 2012, concentration among California gasoline producers has increased further, which has ratcheted up the incentive to create artificial scarcity in the market.

In late 2014, the California Energy Commission appointed a 5-member committee, called the Petroleum Market Advisory Committee, to consider what drives California’s gasoline prices and whether the market is workably competitive.  I’m one of those lucky five.  There will surely be some interesting meetings. 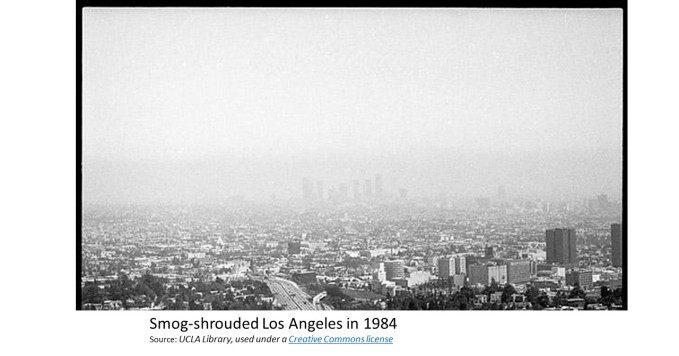 But before diving into the murky world of gasoline price competition, let’s step back and remember the murky air that prompted the California Air Resources Board (CARB) to adopt the world’s strictest gasoline standard (known as CARB gasoline) and effectively separate our gasoline market from the rest of the country.

In the 1990s, California had very poor air quality.  Most of the population lived in counties that were out of compliance with federal standards for ozone, a gas that damages lungs and leads to a variety medical problems, including premature death.  The Los Angeles-San Diego corridor was in “severe nonattainment” for ozone.  Federal standards for reformulated gasoline (RFG) went into effect in the early 1990s, but those standards were critically flawed — as Max Auffhammer and Ryan Kellogg have documented in a 2011 paper published in American Economic Review, which has received far too little attention from the EPA (A nice non-technical summary of the paper is here).  The federal standard has a loophole that allows refiners to meet it by adjusting their gasoline formulation in a way that has little or no ozone-reducing impact. 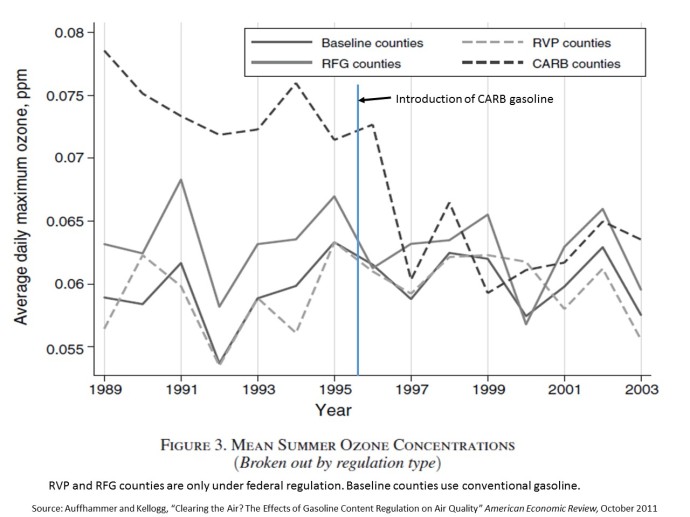 The California standard closes that loophole by requiring a stricter formulation.  Auffhammer and Kellogg show that only California’s standard has had a substantial, and statistically significant, impact on ozone.  Combining their results with medical research on the impact of ozone, they estimate that the California standard saves at least 660 lives per year, which more than justifies the additional cost of our cleaner-burning gasoline.[1]  And their estimates don’t count reduced illnesses (short of death) or other reduced environmental damage that we know are also caused by ozone.  A new study out of USC this month shows that kids in Los Angeles today have substantially healthier lungs than those who grew up there 20 years ago and links the improvement to reduced auto emissions.

The results in California have been tangible.  Ozone concentrations have steadily declined over the last 20 years.  The haze in the LA basin continues to dissipate.  Our air is cleaner and as a result we are healthier.

So, what has the California gasoline standard actually cost consumers?

The most direct measure is retail prices, but they are confounded by taxes, which vary month to month because California and some other states collect both a per-gallon excise tax and a percentage sales tax.  Still, from 2009 to 2013, California taxes averaged about 20 cents per gallon above the national average and our retail prices averaged about 34 cents above national average.[2]  Much of the 14 cent difference is likely attributable to CARB formulation, but it’s difficult to know how much. 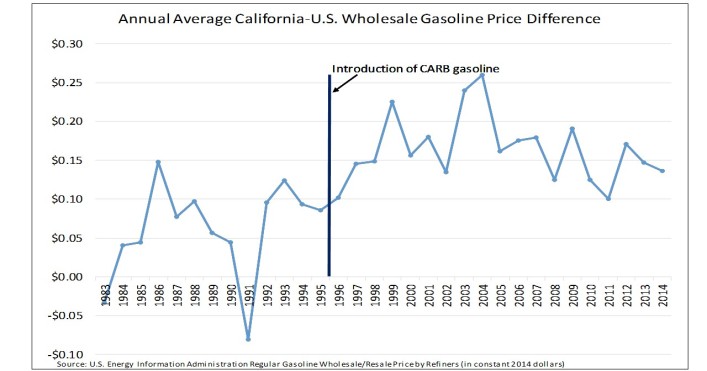 A cleaner measure is refinery-level wholesale prices, which do not include taxes and are easier to compare over a long time span.  In the 13 years prior to adoption of CARB gasoline 1983-1995 (as far back as the available data go), California wholesale prices averaged 6 cents above national average (in 2014 dollars).  From 1996 through 2014, they have averaged 16 cents above national average (in 2014 dollars), an increase of 10 cents per gallon.

The average Californian uses about a gallon of gasoline per day, both directly in their car and indirectly in the fuels that are used by businesses that serve them.  So, we are each paying, on average, somewhere in the range of $37-$51 per year.  That’s saving hundreds of lives and preventing lung damage in thousands of other people each year.  And these health benefits go disproportionately to the poorest residents, because they suffer the greatest share of the impact from ozone.

Yes, our occasional price spikes are annoying.  And, yes, they raise real concerns about the competitiveness of the market, which the state should continue to investigate.  But averaged over the years, the cost of our cleaner-burning gasoline is actually pretty modest.  Californians love to gripe about the high cost of living here, but we stay in large part because of the natural beauty and our enjoyment of being outdoors.  Paying a bit more for gasoline — along with the state’s program to check tailpipe emissions at the time of vehicle registration — makes an important contribution towards maintaining that beauty and the ability to enjoy it.

[1] In doing their calculations, Auffhammer and Kellogg use the EPA’s value of a statistical life and assumed that the California formulation raises costs by 8-11 cents per gallon.  Their argument stands up, however, even if the CARB formulation cost more than 30 cents per gallon.

[2] The difference in state levies increased on January 1 with the inclusion of transportation fuels in the state’s cap-and-trade program.  As I discussed last summer, and has since been confirmed by the industry and the Air Resources Board, this is expected to raise California gas prices by about $0.10 per gallon.