And what does this mean for our vehicle electrification goals?

A humanitarian crisis in Ukraine. Record-high gasoline prices. A new IPCC report urging climate action or else. If you drive a fossil-fuelled vehicle (FFV), you now have some intense reasons to reconsider your vehicle fuel choice. 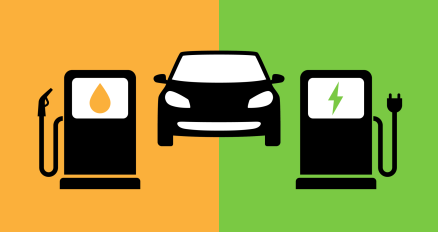 We’re all hoping that the geopolitical situation will improve in the coming months. But the climate crisis is not going anywhere. So now is a good time to lean into our vehicle electrification goals. And commit to keeping this policy pressure up, even when Putin and high gas prices fall out of the headlines.

How hard to push on electric vehicle (EV) market penetration depends in part on how much carbon weight we’ll drop if we meet our EV targets. It’s relatively straightforward to count the GHG emissions avoided by taking FFVs off the road. Accounting for offsetting increases in EV-caused emissions is more complicated.

Two new papers take a stand on how we should be estimating the electricity sector emissions impacts of vehicle electrification. As is often the case, economists and engineers disagree. In this case, I hope the engineers turn out to be right.

How many tons of carbon in an EV mile?

The GHG impacts of EV driving depend a lot on the carbon intensity of the grid you’re plugged into. To convert your kWhs into carbon emissions, you could use an average carbon intensity. A quick google search will tell you that U.S. electricity generators emit about 0.85 lbs of CO2 per kWh generated on average. Easy.

But your economist friend will point out that putting one more EV on the road impacts electricity production on the margin. So, she’ll explain, you should instead be thinking about the GHG emissions intensity of the marginal generator that ramped up to meet your EV demand. 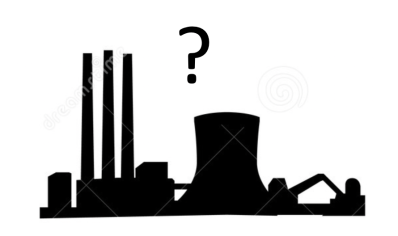 Thanks, econ-friend. But how big a difference will it really make if I use an easy average versus this harder-to-pin-down marginal emissions rate? This is the point of departure for a new paper written by a team of great environmental economists we’ll call HKMY (Stephen Holland, Matt Kotchen, Erin Mansur, and Andrew Yates).

HKMY start with some cool graphs to show how the average carbon intensity of US electricity generation has fallen by around 28 percent since 2010 (green line), while the marginal emissions rate has increased by 7 percent (blue line).

One unfortunate implication: while the grid has been getting greener, my EV has been driving dirtier! The graph below shows how our marginal emissions rates have been creeping up. 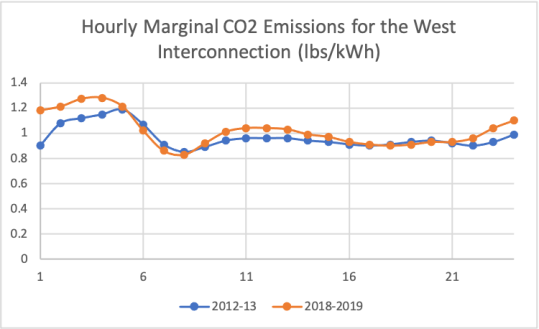 What’s driving this increase? A number of factors (e.g. low natural gas prices, increased investment in renewable energy) are pushing coal plants to the margins of the market, but not out of the market entirely. Coal plants are increasingly the ones responding to demand changes.

I really like this paper. But I don’t love this punchline. The marginal emissions rate favored by HKMY is a very precise and credible estimate of how an incremental increase in demand increases electricity sector emissions, holding the structure of the power system fixed. This is the right number for estimating the emissions from charging my Chevy Bolt today. But I’m not convinced that it’s the number we should be using to estimate the emissions implications of charging 50 million new EVs in 2030 and beyond.

An anticipated electricity demand increase of 4-5 percent over the next decade could easily induce new capacity investments and non-marginal operating changes. Anticipating this response- and what it might imply for GHG emissions-  requires detailed grid optimization and dispatch modeling. Economists – myself included-  are getting queasy just thinking about all the assumptions that this kind of modeling requires. So here’s where the engineers come in.

The point of departure for this new paper by NREL’s Pieter Gagnon and Wesley Cole is that (1) the power system of tomorrow will look different than today and (2) a significant increase in vehicle electrification will cause power system planners to make additional investments and operational changes. They use a capacity expansion model to predict long-run power system planning and operations under a baseline scenario. They then ask (the model) how system emissions would change with a permanent 5% increase in electricity demand (very close to the total load change used by HKMY).

If we take their projections for how a 5% electricity demand increase will increase emissions as the “truth” – a leap of faith- we can then ask how close we get to this truth using different accounting approaches. In addition to the two approaches considered by HKMY, G&C introduce a third way. They calibrate a “long-run” marginal emissions rate that captures (in a model-based way) how increased demand will change emissions via changes to grid structure and operations.

G&C find that calculations using the base-year average emissions rate get much closer to the “true” (modeled) emissions than the HKMY-endorsed marginal rate because their model predicts that the EV load will induce more investment in zero-carbon generation. Their long-run marginal emissions rate (LRMER) performs best of all.  To make a coarse comparison, I used an NREL LRMER to approximate the annual emissions impact of 51 million EVs on the road by 2030. The figure below contrasts these estimates. 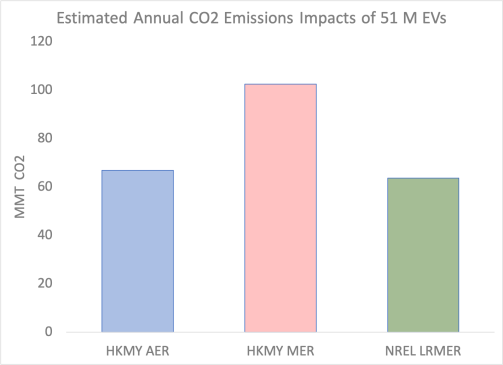 A caveat with this LRMER approach is that the underlying grid optimization model makes many assumptions about future technology costs, grid operations, etc. For example, it assumes that load increases are perfectly anticipated and optimally planned for. Real-world responses to electricity demand increases will surely be messier. That said, using the marginal rate estimated by HKMY assumes load increases are not planned for at all, which also seems unlikely.

A big advantage of HKMY’s approach is that they use real data that capture changes in the actual functioning of the real-world electricity grid. The disadvantage is that their estimates assume that planners and operators and investors do not change their behavior when they see 50 million new EVs coming online. The engineers are more optimistic – or realistic?- about the grid’s ability to optimally plan and respond.

Who’s got it right? It really depends on where we go from here. If we sit idly by as new EVs plug into the grid, the economists’ assumed complacency will bear out, and the climate impacts of vehicle electrification will fall short.

Economists and engineers can agree on the importance of making concurrent investments in a cleaner, greener grid in order to optimize the climate impacts of EV adoption. If we can rally to coordinate cleaner grid investments (renewables and storage!)  and operations (demand response and smart charging incentives) in anticipation, realized GHG reductions will get closer to – or even exceed- the engineers’ vision.

Suggested citation: Fowlie, Meredith.  “If the Grid is Getting Greener, How Can EVs Be Driving Dirtier?”  Energy Institute Blog, UC Berkeley, April 11,  2022, https://energyathaas.wordpress.com/2022/04/11/if-the-grid-is-getting-greener-how-can-evs-be-driving-dirtier/

36 thoughts on “If the Grid is Getting Greener, How Can EVs Be Driving Dirtier?” Leave a comment ›