Can we get more carbon mileage out of politically passable climate policy?

Build Back Better (BBB) prospects are not looking so good. And the problem with swinging for the fences is that, if you swing big and miss, you can end up with nothing. So the time has come for a pragmatic pivot.

Last week, Senator Elizabeth Warren was talking about breaking up BBB to get the passable pieces across the finish line. Senator Edward Markey was warning that the time has come to focus on a smaller package that has the votes. Biden conceded that it’s time to break it up. 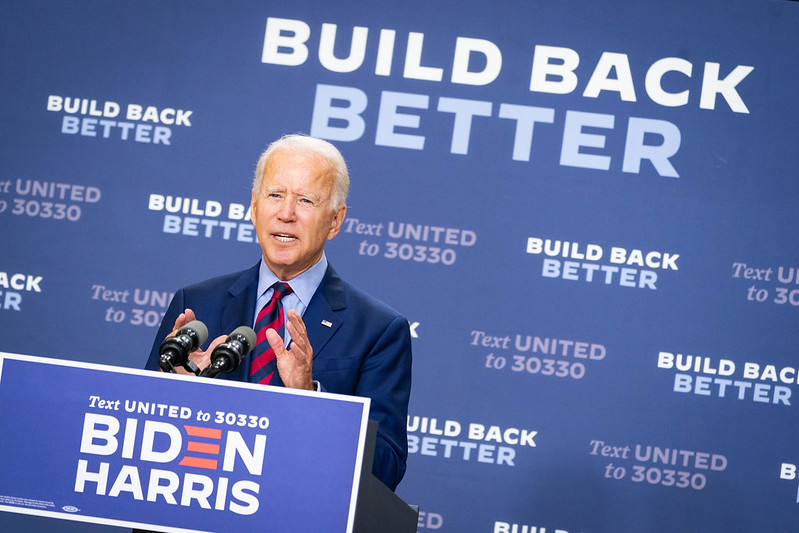 If Democrats are looking for passable pieces, the clean energy tax credits in the current BBB proposal look like a relatively safe bet. But can these tax-based subsidies get us on track to meet our GHG targets? Recent research suggests they won’t be near enough. If we are going to fight climate change with tax incentives, can we build them better?

The do-nothing option (not a good option)

It’s been hard to watch BBB falter. This feels somewhat familiar. Back in 2009, we had a new administration with unprecedented climate ambition. After pushing a massive economic stimulus bill through Congress, Obama aimed to pass a comprehensive climate bill with ambitious (for the time) 2020 GHG goals. We all remember how that ended – in disappointment.

This failure of federal climate policy notwithstanding, the US ended up outperforming Obama’s 2020 GHG emissions targets. So it’s tempting to think/hope that the forces that have been driving down GHG emissions over the past decade will just keep on driving (twice as fast to hit Biden’s more ambitious goal of 80-100% clean energy by 2035).

Some recent work by Harvard economists Jim Stock and Daniel Stuart puts this hopeful idea into stark relief. Jim and Daniel are focused on modeling emissions in the power sector which is expected to deliver an outsized share of total emission reductions over the next decade. Their work is summarized in two recent papers (here and here).

One thing I really like about their approach is that they illustrate emissions trajectories across a range of plausible energy market worlds that we might find ourselves living in. These scenarios differ in terms of clean technology cost assumptions, natural gas price trajectories, and electricity demand projections. Details  can be found in the paper.

The graph below summarizes GHG projections under a federal climate policy strike-out scenario. This assumes that no new federal policy makes it out of Congress and tax credits phase out according to current law. 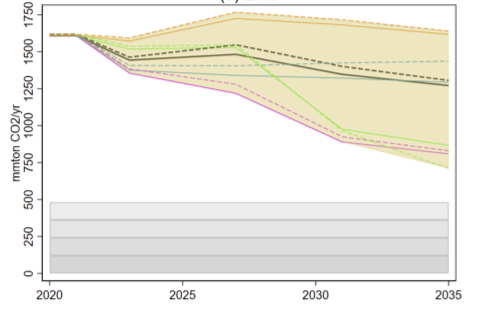 You can see that these GHG projections are particularly sensitive to assumptions about renewable energy costs going forward. But even in the best-case scenario (where wind, solar, and battery storage costs fall faster than expected and efficiencies improve significantly), a federal climate policy strike-out leaves us pretty far short of our decarbonization goals.

Can we green the grid with tax credits?

In addition to modeling some home-run policy scenarios, Jim and Daniel have been analyzing a range of possible second-best policies. This includes a scenario in which the only part of BBB that makes the political cut is the material expansion and extension of the $24/MWh production tax credit (indexed to inflation), the 30% investment tax credit, and a tax credit for CCS.

Their modeling results are summarized below. Comparing these GHG trajectories to the strike-out case above, you can see that tax incentives reduce GHGs across a range of energy market scenarios: 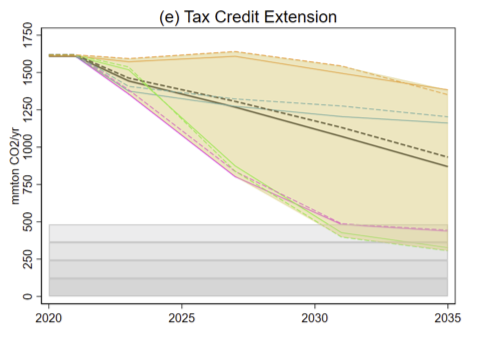 In “HiR” scenarios, where renewable energy and storage technology costs fall by only 20-30% between now and 2035, tax credits have a pretty small impact. What’s going on?

The problem is that tax credits are not directly targeted at GHG emissions. These tax incentives subsidize clean technologies at the same rate, regardless of whether these resources displace hydro or coal. And fossil generators can pollute without penalty, no matter how carbon intensive they might be. All carrot and no stick amounts to fighting climate change with one hand tied behind our back.

I am not a carbon-tax-or-bust economist. But I am climate-anxious and looking for the most effective policy response possible. So let’s just suppose that savvy politicos could finagle enough votes to support not only the expanded tax credits, but also a modest carbon price of $20/ton.

The figure below projects GHG emissions under the BBB tax credit extension + $20 carbon price (increasing at 3% annually in real terms): 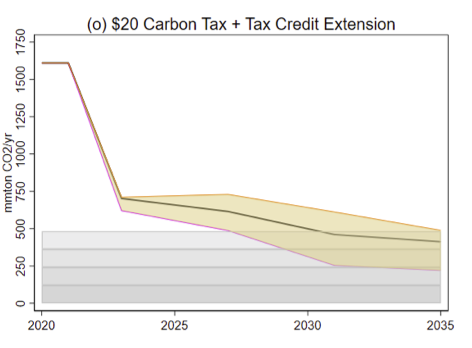 This figure illustrates two key points. First, even a modest carbon price can make a big difference. A $20/ton carbon price increases the operating costs at an average coal plant by about $20/MWh (assuming  2.23 lbs/kWh for coal generation). This  cost increase is sufficient to drive coal out of the market given the range of natural gas prices considered. And this helps explain the steep drop in GHGs when the carbon price takes effect.

Another take-away: tax incentives and carbon pricing are true complements. The emissions reductions achieved with the combination of the tax credit subsidy and the modest carbon price exceeds the reductions we’d get under either policy acting alone.

Tax credits will work to accelerate needed clean tech investments. This will reduce GHG emissions at home, and help to drive down costs for the rest of the world. Financing clean tech investments with federal tax dollars, versus utility bills, will also mitigate impacts on retail electricity prices. This is important, because a clean energy transition funded by higher electric rates will undermine efforts to electrify other sectors.

In other words, there’s a lot to like about clean energy tax credits. And the BBB proposal adds more. The House-passed plan includes design changes that reduce investment uncertainty and add a direct-pay option. These refinements will help grease the wheels of needed clean energy investments. But they will not address a core problem: GHG polluters can keep polluting for free.

If Democrats could tie a modest carbon tax bow around this tax credit package, we would see much deeper GHG reductions. But if a carbon price is not in the cards at the moment,  slow progress on good climate policy is better than no progress. Let’s work to pass the best passable clean energy tax incentives. And then look for every opportunity to sharpen the carbon focus of our policy tools.