We need to get a handle on distribution costs as we get serious about electrification.

Our household gets unusually excited about power system infrastructure. We reroute road trips to check out high voltage transmission towers. Our photo album includes pictures of our kids posing with transmission insulators.

Recently our dinner table conversations have been wandering into the topic of distribution infrastructure: conductors, transformers, and substations. You might think this stuff is a bit of a snooze (our kids share this sentiment). But this topic is increasingly important.

For one thing, the amount that utilities are spending every year on distribution system costs is escalating fast. And we have some big decisions to make about where to locate new renewable energy investments (think solar and storage) and new loads (think heat pumps and electric vehicles). How we account for distribution system costs when designing the grid of the future could significantly impact these choices.

So let’s dig into what we know — and what we don’t — about distribution system costs.

Every year, major U.S. electric utilities file public expenditure reports. These data aren’t perfect. They only represent about 70% of total US electric load. But they do provide a window into utility spending trends. The chart below shows total annual distribution expenditures (inflation adjusted) by major spending category: 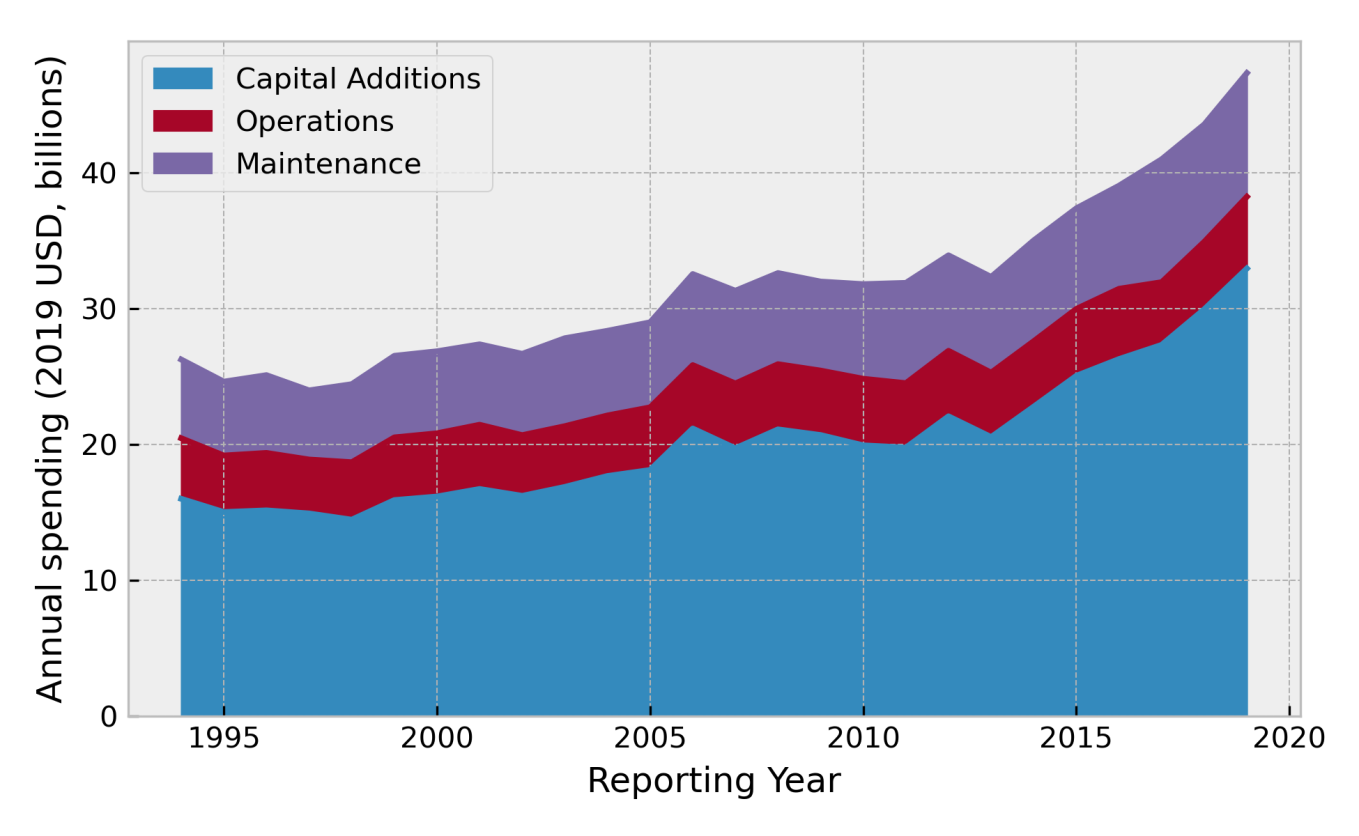 Source: FERC Form 1. These are annual expenditures reported by over 250 US utilities.

Distribution expenditures have been rising over this whole period. But something changed in the last few years. Between 2014 and 2019, capital investments in distribution infrastructure rose 65%! What the heck could be happening? Let’s unpack two possible explanations.

More customers? (No)  Looking across utilities, a big driver of distribution system cost variation is the number of connected customers. Cost increases over time could reflect expansions and upgrades to serve an increasing number of new customers. But the total number of connected customers has only increased 6% from 2014 to 2019. So real distribution costs per customer are also increasing (particularly among the California utilities).

Notes: Real annual distribution spending per customer reported by over 250 US utilities. Half of all utilities fall in the range defined by the “boxes”. Approximately 99 percent fall within the “whiskers”. California utilities are highlighted for our California readers.

Increasing peak demand? (Nope) Utilities could be making more distribution system investments to keep up with peak demand. But peak demand for grid electricity (net of behind-the-meter solar) has been declining on average in recent years.

Notes: summarizes real annual distribution spending per kW of peak demand reported by over 250 US utilities. 50 percent of utilities fall in the range defined by the “boxes”. Roughly 99 percent fall within the “whiskers”.

You can see that utility distribution spending is increasing per kW of peak demand. This is  particularly true for the California utilities. If rooftop PV can reduce  distribution costs, it’s not showing up in these data.

The bottom line is that distribution spending is on the rise across the country, and we can’t explain it with growth in customers or demand alone.

What we don’t know about distribution costs could cost us.

In our own research and past blogs, we (and Severin and Lucas) have argued that distribution costs can’t matter much when making a case for distributed solar. But we want to take a minute to think about how distribution costs could matter in a different situation — one where we’re electrifying new loads — to highlight the importance of getting good estimates of future distribution costs.

Consider this thought experiment that adds electrification to the mix. Suppose we anticipate a growing number of electric cars (EVs). Let’s assume we’re going to build more solar — somewhere — to charge them. And assume we have the technology to charge in perfect unison with output from the solar (a strong assumption). This would likely mean workplace charging, at times when commercial distribution circuits are nearing peak demand. We’ll have to pay to expand the capacity of those circuits to make this scenario work if the solar is utility-scale, but not if it’s located where the EVs are charging.

In California, E3 estimates that avoided costs — coarsely at the utility zone level —  range between $15 and $168 per additional kW per year in 2019. A year of production from 1 kW of PV, depending on location, would get you about 1,500 kWh per year. That works out to between 1 and 11 cents of added distribution costs per kWh of solar delivered to our cars in this simple scenario, if it’s coming from far away.

This 2019 Lazard report estimates the unsubsidized levelized cost for grid-scale solar at 4¢/kWh. Using this estimate, and the distribution cost estimates, our clean car scenario would cost between 5 and 15¢/kWh if we choose the utility scale solar path today.

Source: EVs charging while you work

This rough calculation is designed to show how distribution costs could steer decisions about where we build electrified load and distributed generation. Obviously, there are a lot of caveats and complications that our simple example ignores. For example, in the distributed scenario it might be necessary to upgrade part, but not all, of the distribution system in order to share solar between locations. This all goes to show why it’s important to build distribution cost considerations into the state-of-the-art planning models we are using to plan a greener grid.

Some recent studies are trying to tackle this challenge — for example this one from Vibrant Clean Energy and this one from researchers at Princeton. However if you dig into the details of these studies, you’ll find they’re using long-term historical trends in distribution spending (going back at least 25 years) to estimate average distribution capacity expansion costs per kW. You’ll also find that these studies are using total capital investments in distribution grids, rather than the marginal or incremental costs of adding a new kW of capacity.

The devil’s in the (distribution system) details

A host of factors (low interest rates + generous authorized rates of return?) could be driving distribution spending growth. At least some of this spending rise has been attributed to concerted efforts to overhaul the nation’s aging distribution grid. If that’s the major driver, perhaps spending will settle back down in the future.

Whatever’s driving changes in distribution spending, we need to get a handle on it. And figure out how to account for the going-forward distribution cost implications of big changes to electricity consumption. The distribution system may not be the most exciting piece of the greener grid planning puzzle, but it’s critically important to understand it better.

22 thoughts on “Distribution Costs and Distributed Generation” Leave a comment ›