California is dreaming of a fossil-free transportation future. Smart choices and economic analysis are needed to bring it within reach.

Frustrated by the setbacks, plagues, and stresses of 2020, I recently decided to lift my spirits by setting a few goals for self improvement. I declared that I will soon complete an Ironman, master French cooking, and, regardless of their behavior, I will only speak to my children in calm, rational tones that foster their long-term development and sense of worth. That felt good, so I also declared that I’d finally read Ulysses.

Gavin Newsom also set some lofty goals late last month, which aim to lift the Golden State from its orange-sky pandemic doldrums. Specifically, Newsom penned an executive order declaring that 100% of new passenger cars will be zero emissions by 2035, and new medium- and heavy-duty trucks will be 100% zero emissions by 2045. He threw in 100% of off-road vehicles for good measure. Like a phoenix, California has been told to rise from the ashes of 2020, reborn with a fossil-free transportation sector. Or, so goes the plan.

Like my hypothetical, perfectly executed Coq Au Vin, a fossil-free transportation sector sounds great. But, can we really get there? And, if so, how might economics help us along? 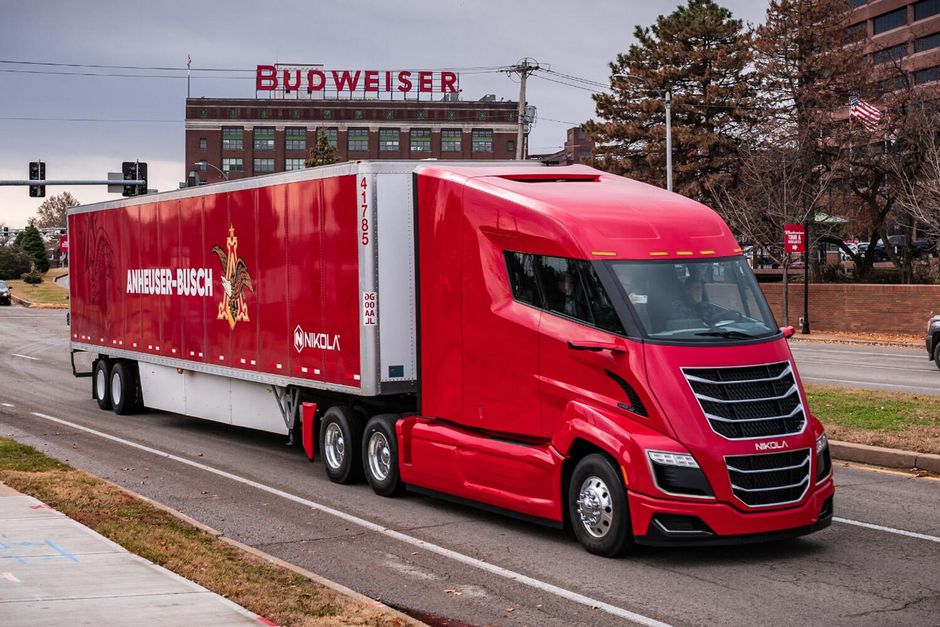 How radical is the goal?

For a 40-year old economist, I’m in reasonably good shape. But the truth is I’ve never run more than about 11 miles; I don’t distance swim; and I don’t own a road bike. So, I could conceivably complete an Ironman, but I’ve got a long way to go.

Unfortunately, California is just as far from its fossil-free transportation goals as I am from mine. The electric share of the new vehicle market in California sits under 6%, a third of which are plug-in hybrids that don’t qualify as zero emissions. Nationally, the EV market share is 2%, and this metric actually fell in 2019. Globally, growth in the EV market leveled off in 2019, weighed down by stagnation in the US and China. Meanwhile, the market share of zero emission medium- and heavy-duty trucks rounds off to a clean 0%. Viewed this way, the goals are radical, and the road is long.

California, however, is not alone in its ambitions. More than a dozen countries, including France, Germany and the UK, as well as a number of cities and provinces have similar plans to phase out new fossil passenger vehicles. California’s plan is a bit faster, but not out of line. California does stand out in its inclusion of medium- and heavy-duty trucks. Here though the executive order hedges; the 100% zero emissions goals are to be met “where feasible.” (We should probably take the idea of 100% zero emissions trucking seriously, but not literally.) 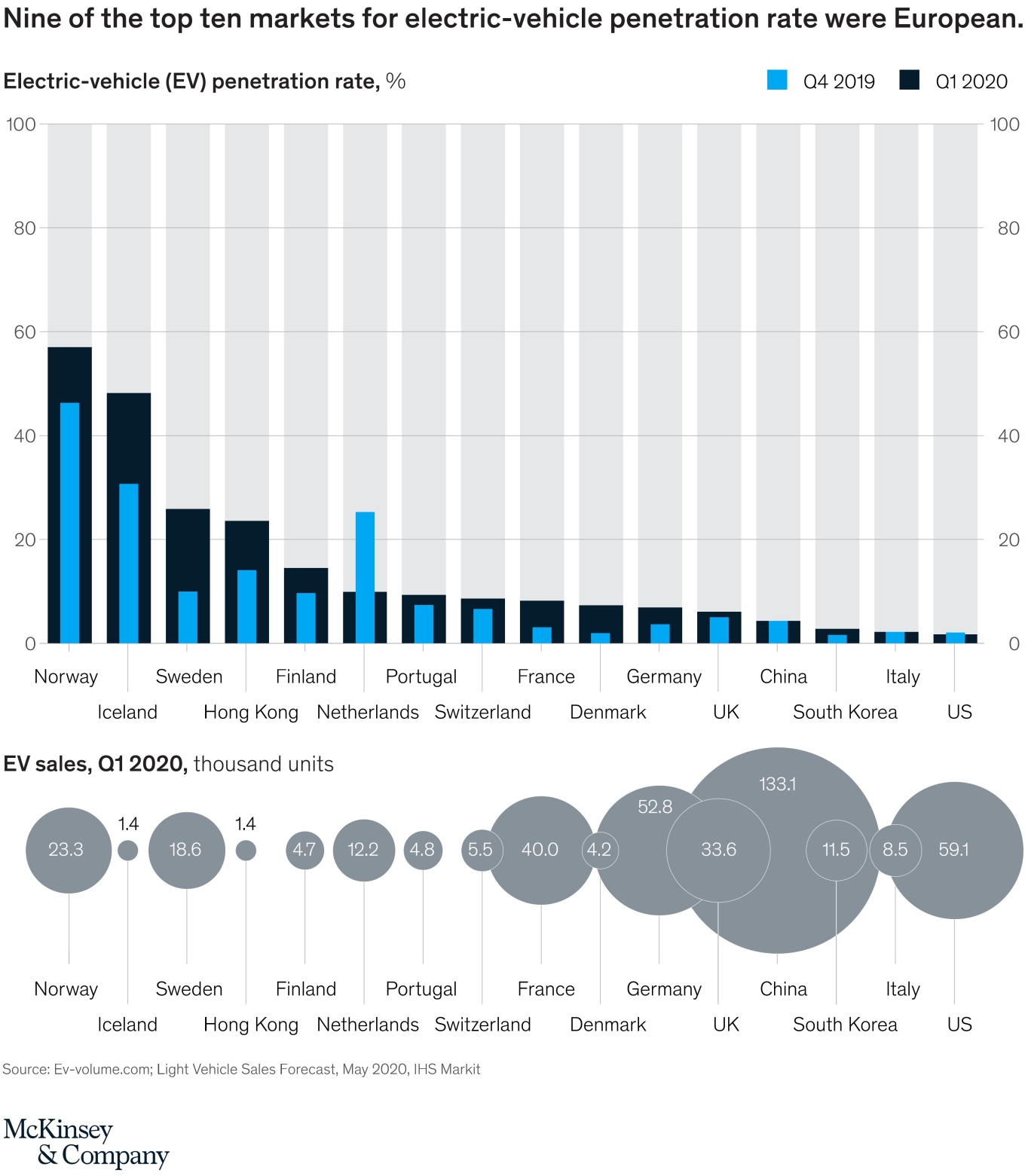 There is reason for optimism about rapid change. The variety of vehicles on offer is exploding. Automakers are making bold statements about a near-term transition. Many market watchers predict price parity for electric passenger cars within the next few years. And a few smaller countries have achieved large EV market shares already. But these examples, which are almost entirely in Europe, were achieved via large tax incentives and public investments. This brings us to the essential topic of the policies we need to obtain this goal. How might we ascend to such lofty heights?

In a sign of expanding consumer choice, a bevy of new, made in the USA electric pickups should be available within the next two years. (Photo: Autoweek)

We will need many smart choices along the way

If I’m going to run my triathlon, I’ll need an intelligent training regimen, and a little luck. Likewise, California is going to need a good plan to pursue its goals, and I think economics can help us avoid some costly detours. Here are a few quick thoughts along those lines.

First, a primarily electric transportation sector needs to be coupled with smart choices in California’s electricity sector. Naysayers reacted to Newsom’s announcement by pointing to the state’s rolling blackouts in August, reasoning that we can’t accommodate big increases in demand. On the other hand, EV advocates point to the potential for EVs to act as storage in a smarter grid.

As a member of the Energy Institute, I’m contractually obligated to point out that smart rate design will be critical here. We’ll need time varying rates to ensure that transportation doesn’t put pressure on peak hours, and we’ll need a smart overall design in order to make sure that high electricity prices don’t stall progress in decarbonizing transportation.

Second, transforming our transportation sector into a beacon of light for the world just might require some money. California, however, is staring at a massive deficit today and a tight budget in the near term. If the state simply ratchets up its current Zero-Emissions Vehicle (ZEV) mandate to push the transition, that won’t require direct funding. But it won’t raise any money either, and the executive order calls for large investments in charging infrastructure, policies to ensure that zero emissions transportation is affordable for low-income communities, and funds to facilitate the retirement and repurposing of capital in the state’s oil sector.

As such, instead of just leveraging the ZEV mandate, the state might want to reform the existing sales tax on automobiles into a scheme that taxes fossil vehicles and subsidizes zero-emissions cars. Such a system, sometimes called a feebate, has been widely used in other countries (often labeled a Bonus-Malus after the French) to pursue environmental objectives. It can be designed to be revenue neutral, but it can also be calibrated to raise revenue that could be funneled into infrastructure and low-income programs. (Incidentally, the EPA administrator, himself a former lobbyist for the oil and gas industry, speculated that a ban on fossil vehicles in California would be subject to federal preemption and require a waiver. A tax system might have a different legal pathway.)

Another revenue option would be to tax the used fossil fleet via registration fees tied to pollution. This is also a common strategy in other countries, where such “circulation taxes” can be substantial. Moreover, economists have recently thought through how to achieve the same effects with a quota system if the use of taxes proves politically unwise.

Such a scheme might be an important tool for overcoming unintended consequences of a ban on new fossil vehicles. The executive order mentions only the new vehicle market. It appears not to ban fossil vehicles from being purchased elsewhere and registered in the state, even after 2035. And it explicitly does not force residents to retire the cars they already have, nor does it prohibit sale of used fossil cars in the state.

This is likely to engender a host of problems. First is simple “border shopping” (it might be a good time to buy a car dealership in Reno!). Second, “grandfathering” (where the elderly are excused from present day norms) of the existing fleet might cause people to hold on to older fossil vehicles longer. Third, a looming ban can trigger a version of the “green paradox,” wherein people rush to buy extra of something before it is prohibited. (Maybe you stashed away a few incandescent bulbs at one point?)

Smartly designed registration fees have the potential to discourage fossil imports, encourage fleet turnover and avoid the green paradox, all while raising much needed revenue to facilitate the transition.

A zero emission new vehicle fleet in 2035 is certainly possible. It’s not science fiction. I’d love to have cleaner air and quiet streets, not to mention a livable planet. But just like my goals for self improvement, it won’t become a reality without a sustained commitment and a lot of smart choices along the way.

James M. Sallee is an Associate Professor in the Department of Agricultural and Resource Economics at UC Berkeley, a Research Associate of the Energy Institute at Haas, and a Faculty Research Fellow of the National Bureau of Economic Research. He is a public economist who studies topics related to energy, the environment and taxation. Much of his work evaluates policies aimed at mitigating greenhouse gas emissions related to the use of automobiles.