A new paper helps us measure how “unequal” electricity rates are.

If you go to a kid’s birthday party, it’s usually not the size of the birthday cake that matters to the kids. All that matters is how big of a slice Noah gets relative to Will, Sam and Kyle. In economics we generally have focused on making the biggest possible cake out of the resources available (we call that efficiency) and underemphasized how we slice it up (we call that equity).That has changed recently, especially in the realm of energy and the environment as the discipline – much too late – is putting much more emphasis on how the impacts of environmental and energy regulation are shared.

On this blog, Severin has recently discussed the fact that once you account for the full cost of generating and shipping electricity to Californians’ homes, electricity is still more expensive than it should be. This is inefficient. That is of course economically correct (Severin’s rarely wrong, and when he is, it’s usually not related to energy economics). But underneath that finding, there is a subtle layer of questions, that is worth digging into. Namely, what are the distributional consequences of the way we price electricity and how do we measure them – inside and outside California? I have been thinking about this for a bit and on sunny Monday morning a new paper written by another tall bald energy economist Arik Levinson  (and his coauthor Emilson Silva) with a jealousy inducing title called “The Electric Gini: Income Redistribution through Energy Prices” landed in my inbox. And it is a beauty, so let me discuss what they do in this paper.

Electricity in most places is priced in a more complex fashion than ice cream is. First off, in most places your bill will include a fixed monthly charge. This is often the same $ amount across households. Hence, if you are poor, this is a bigger part of your budget than if you are rich. Second, utilities charge you a volumetric charge, which means you pay some rate for each unit of electricity consumed. Ice cream, for example, is usually sold at a volumetric charge of, say, $1 per scoop, regardless of how many scoops you consume, or a lower price for the second scoop than the first.

Many utilities charge what is called an increasing block rate price. This means as you consume more, the price of an additional unit rises. The first scoop of ice cream costs $1, the second $1.50 and so on. This volumetric way of pricing has a two important implications. First it discourages ever higher levels of consumption (would you consume that 6th scoop of ice cream at $9?), but it encourages more consumption at lower levels. Second, the high prices at the higher levels of consumption tend to largely hit rich people with big homes, many appliances and large air conditioning bills.

So how do you design an optimal pricing structure? Well, that depends on what you care about. We economists would argue that most or all utilities care about earning whatever rate of return they are allowed to earn. That rate of return, in most places, is of course heavily regulated since if it were not, these natural monopolies would charge massively higher prices and produce too little electricity. But there are many ways of designing fixed and volumetric charges that will enable utilities to make their rate of return. So the second aspect one would want to care about is equity. The paper shows that your and my intuition are probably correct. If a utility (or the regulator) care about equity, they should charge lower fixed charges and higher volumetric rates, with steep increases in rates at the higher levels of consumption.

Some Utility Rates More Equitable than Others

But how do you compare one complex rate structure to another in terms of how equitable they are? The paper does something technically cool here, which could come in handy to regulators. It develops a single valued measure of how “unequal” a pricing structure is. If you paid attention in your undergraduate econ class, you learned about the Gini coefficient, which expresses how unequally income is distributed across a group of people. If everyone has the same income, the index is 0. If Max has all the income and no one else has any, the coefficient is 1(ish). They calculate a “representative consumption profile” from US Energy Information Administration data and use each utility’s price schedule to calculate electricity bills which now only vary because of differences in pricing structures. They use these to calculate Electric Gini coefficients for each utility. They map these and there is a lot of variation as the figure below shows. 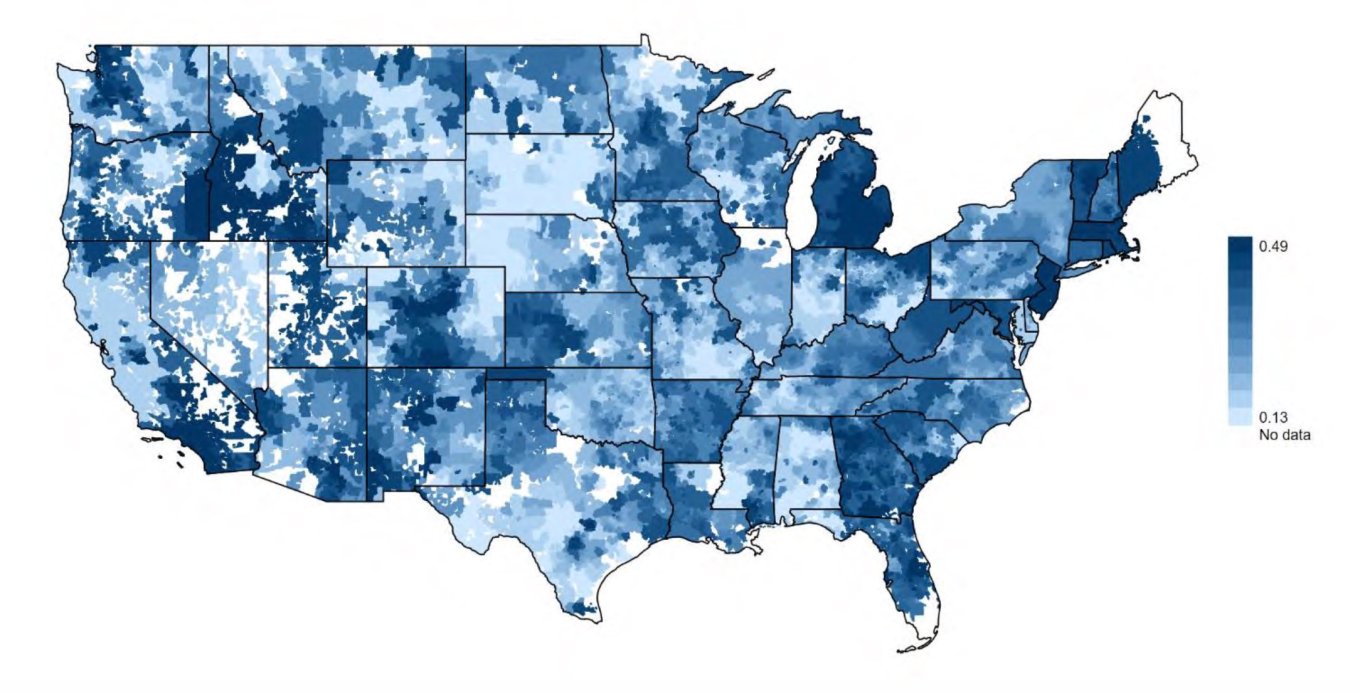 So cool map. But here is where it gets really interesting. Can we check what it is that utilities actually do in practice? Enter a cool dataset on rates for 1,300 US utilities, which the authors match to the characteristics of customer base of each utility.

So overall, this is certainly good news if you are concerned about equity. High fives. Knuckle bumps, we did it! But not so fast. A few points need to be made. First off, as Severin points out, making fixed charges artificially low and block rates artificially high is inefficient. But, this is an old debate in economics. You most of the time cannot have your efficiency cake and hand out equitably sized slices of it. There is a tradeoff and we as a society have to make a call in many settings about how much we value equity over efficiency.

Finally, electricity bills make up a a relatively small portion of the vast majority of households’ expenditures. Even if we have pretty aggressively skewed rate structures, this is likely to not do a lot, which is a point Severin made in a 2012 paper for California. If you want to redistribute income, well, please redistribute income. It’s not that hard. Doing a little bit of this via electricity bills is fine, but it will not go very far at all in the battle to address America’s rapidly growing income inequality. There are better ways. My colleagues Emmanuel and Gabriel have a book on that.