A randomized controlled trial demonstrates the importance of providing financing for energy-efficient appliances in Kenya.

On one of my first trips to Nairobi, Kenya, our local research assistant took me to Kibera – the largest slum in Africa. We sat down with a young couple and their 6-month-old to talk about how they used and paid for energy. They lived in a one-room structure, divided into sleeping and living areas by a sheet. The living area was illuminated by an incandescent light bulb, and they had an old-ish cathode-ray tube TV.

It turned out that they paid 10 percent of their monthly income to their landlord for access to an illegal connection to the electricity grid, but then could use as much electricity as they wanted. Hence, even though CFLs and even LEDs seem common in Kenya – in part because the local utility recently ran a program allowing people to exchange incandescent bulbs for CFLs for free – they had an incandescent bulb.

Given that the vast majority of growth in energy consumption is projected to come from emerging markets like Kenya and given that energy efficiency is supposed to help the world meet almost half of its carbon mitigation goals over the next 30-40 years, places like Kibera are ground zero in the world of energy efficiency. 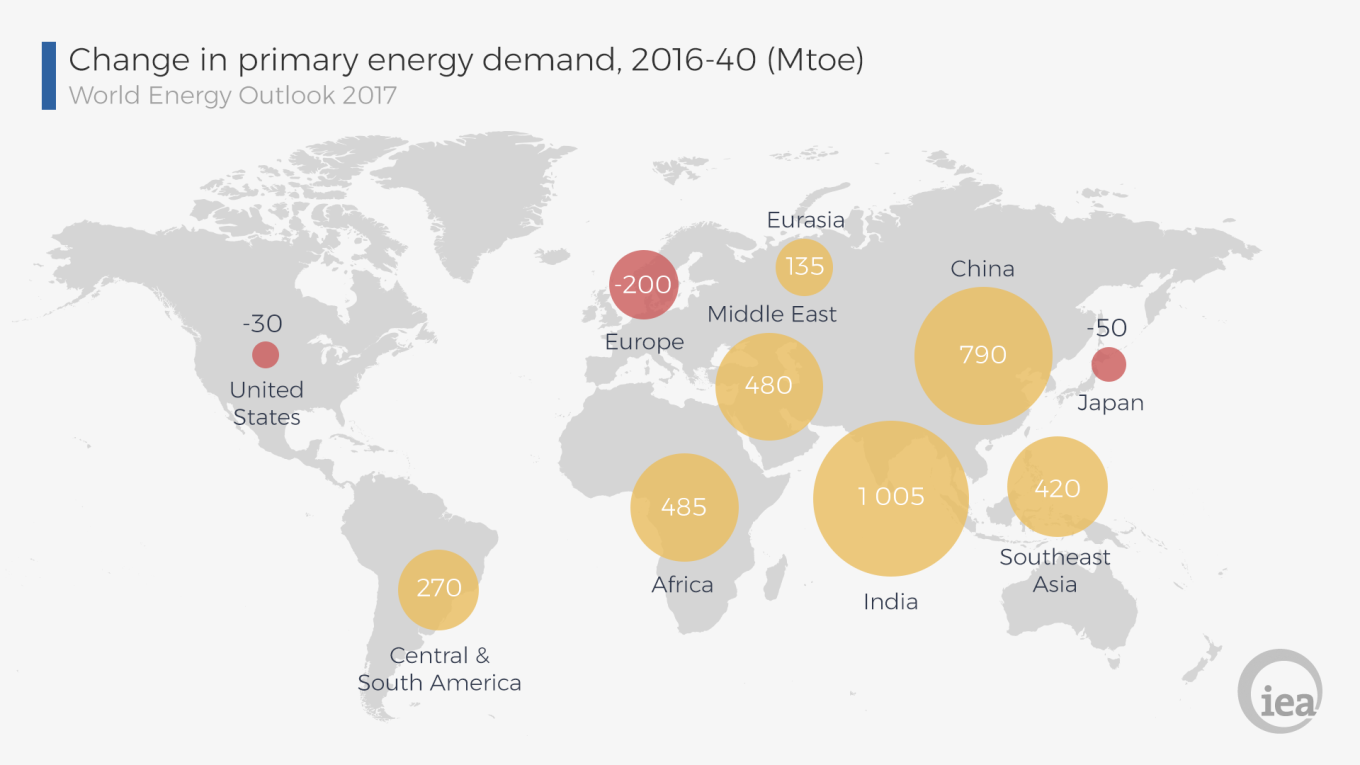 Introducing the Jikokoa: An Energy-Efficient Cookstove

In an exciting new working paper, Susanna Berkouwer, an Energy Institute researcher who is finishing her Ph.D. this Spring, digs into energy consumption by Nairobi slum residents. (The paper is joint with Joshua Dean, a behavioral economist at Chicago-Booth.) They study charcoal cookstoves and their results are quite encouraging. They find a way to close the energy efficiency gap – the apparent unwillingness of consumers to invest in more energy-efficient technologies that would save them money – with a familiar policy: offering credit. 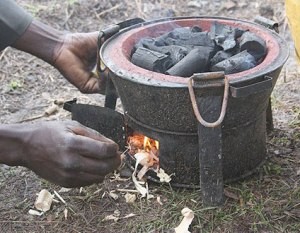 Many urban Kenyans cook their meals by burning charcoal in a cookstove. A traditional cookstove is pictured to the right.

Berkouwer and Dean study the Jikokoa stove, pictured below. It works similarly to a traditional cookstove, and food cooked on the Jikokoa tastes the same, but it uses 40% less charcoal. It has sold well among middle- 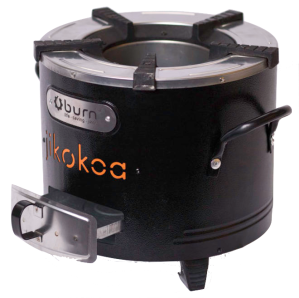 class households, with 600,000 units in use throughout East Africa.

The first thing Berkouwer and Dean do is verify the engineering estimates – does the stove save that much charcoal, and, how much money would a typical resident of a Kenyan slum save? They worked with about 1,000 households and provided everyone with different subsidies for the Jikokoa stoves. Then, they texted everyone in their sample every 3 days to ask how much they’ve spent on charcoal. Plus, for a subset, they provided a plastic bucket to collect the ash from their cookstove use so that the researchers can confirm how much charcoal was used. Both estimates are consistent and suggest that the ex-ante engineering estimates are pretty spot on – savings are about 40% for the typical household.

Confirming engineering estimates is important because they can be inaccurate. For example, together with co-authors, I have found big discrepancies for the Weatherization Assistance Program in the US – our work suggests that actual savings were less than half of what the engineering estimates suggested. Similarly, Lucas found that energy efficiency investments in new housing construction in Mexico did not achieve the gains predicted by engineers.

And, for the Jikokoa, the potential savings are a big deal. People in Berkouwer and Dean’s sample spend on average $6 per week on charcoal, so the savings add up to $120 per year, equivalent to about a month of income for these residents. So, the return on the $40 Jikokoa stove, given the savings it generates down the line, is huge – 300% per year. Nonetheless, in their sample, the average person isn’t willing to foot the $40 bill for the stove. Using current techniques for eliciting consumers’ willingness to pay, they find that the average household is only willing to pay $12 for it, about twice as much as they’d pay for the traditional stove. This is a huge energy efficiency gap – based on expected savings people should be willing to pay a lot more than $12.

So, why aren’t people buying the Jikokoa? In general, the energy efficiency literature considers two types of explanations for the energy efficiency gap (beyond the “technology doesn’t work” explanation, which Berkouwer and Dean ruled out). One is market failures, including landlord-tenant problems, like the one facing the couple I visited in Kibera (also see Lucas’ blog), or problems accessing credit. Another explanation is behavioral biases, like procrastination or inattention.

Berkouwer and Dean test for the influence of two factors: limited access to credit (i.e., loans) and inattention. In the case of credit markets, most people living in slum areas in Nairobi face very tight constraints: they can often only borrow up to $10 or $20 at a time, they have to pay this back within a month, and they often want to save their credit line in case a health or other emergency comes up, which means they don’t always want to use credit to buy new technologies. With inattention, research in the U.S. shows that some people are inattentive to future energy savings. Energy efficiency investments usually require a large, up-front cost today, and savings accrue in small amounts over many periods well into the future. In Kenya, the majority of the people in the study buy charcoal in very small amounts at least once per day. People may, therefore, be biased when they’re comparing immediate costs versus long-run benefits. 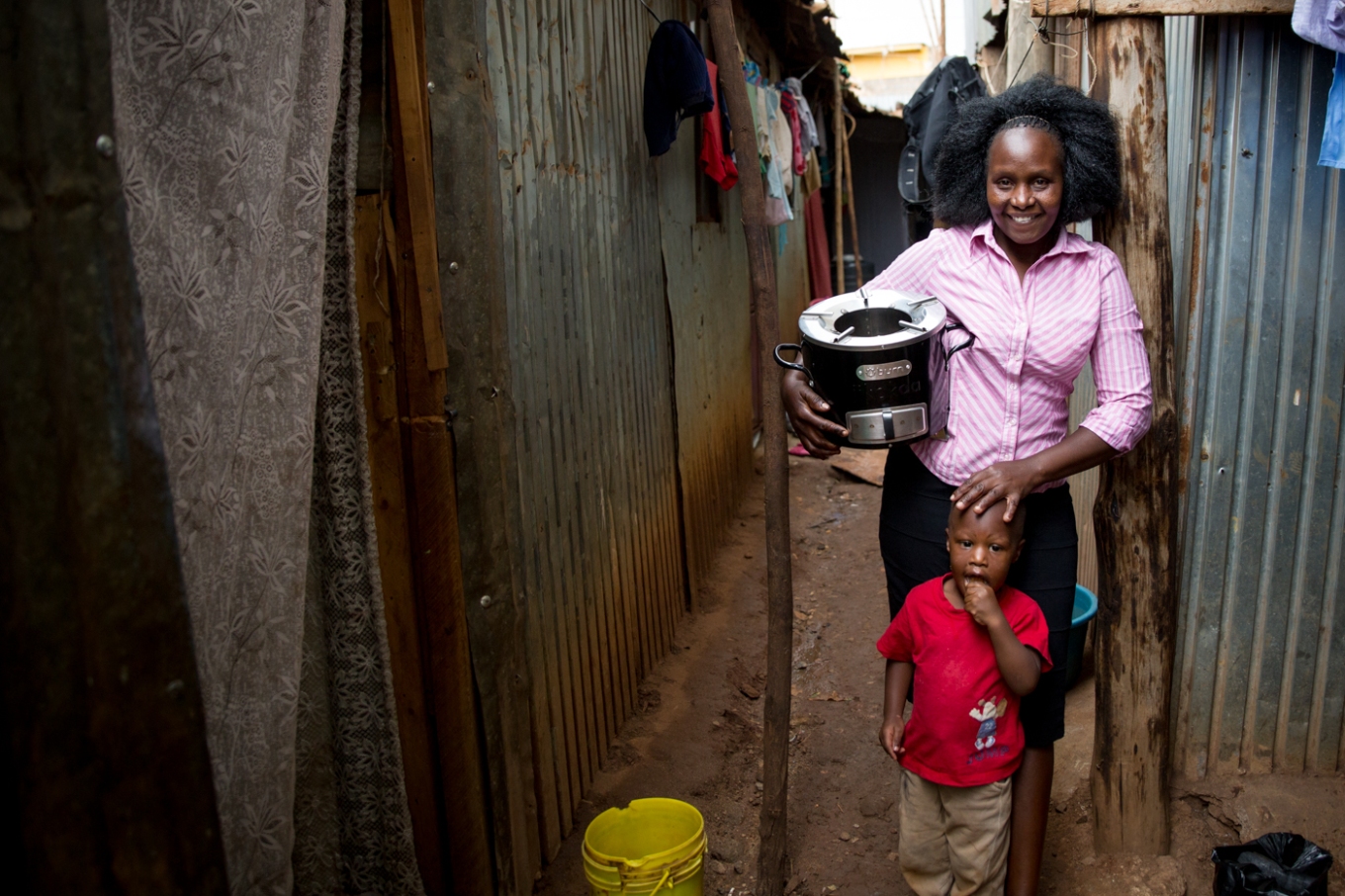 Berkouwer and Dean run a carefully designed randomized controlled trial, offering some people credit and inducing others to pay more attention to the savings. (Side note: yes, randomized controlled trials like this are exactly what last week’s Nobel Prize announcement in Economics celebrated!!) For people who got the credit treatment, they allowed people to pay for the stove over 3 months with either weekly or monthly installments. For the people who get the attention treatment, surveyors spent 30 minutes with households and guided them through the savings from the Jikokoa, and asked them how they would like to spend their potential savings.

Results from the Field

They find that offering credit closes the energy efficiency gap completely over the life of the loan! In other words, with credit, people are willing to pay $27 for the Jikokoa on average, which is what they would save over the 3 months of the loan. In a long-term follow-up visit, Berkouwer and Dean find that the stove still generates similar savings almost two years after adoption, so willingness to pay might be even higher if households had access to a loan over a longer period.

On the other hand, they don’t find any evidence that people were inattentive to energy savings. Households in their sample buy charcoal daily and energy constitutes a large part of the typical household budget, so “nudges” or other behavioral policies may not be an effective policy.

In a nice extension, Berkouwer and Dean show that the presence of credit constraints can undermine one of the pillars of environmental economics – the pollution tax. Normally economists recommend that the most effective way to curb emissions is to set a tax equal to the cost of the pollution, like using the Social Cost of Carbon for a carbon tax. However, this may not be the best policy if customers are credit constrained: upfront subsidies for energy-efficient appliances coupled with a tax work better.

So, does this have implications outside of Kenya? Worldwide, over 2 billion people cook using biomass, most using traditional cookstoves, so understanding how to encourage households to use more efficient cookstoves has potentially massive implications. More broadly, over 5 billion people live in non-OECD countries, so we need more research like Berkouwer and Dean’s to help design energy policies that account for the economic and institutional contexts of low-income countries.