It won’t reduce energy use much, but it can fundamentally alter where that energy comes from.

A decade ago, there seemed to be a Kumbaya trend in climate policy. Politicians of many stripes were saying that pricing CO2 and other greenhouse gases should be the first-line policy of choice against climate change. Then a few years later many on the political right disappeared behind the “we aren’t certain it’s a problem so let’s not do anything” rock. And more recently, many on the left seem to have decided that because carbon pricing won’t completely address the climate crisis and environmental justice at the same time, it should just be jettisoned.

Earlier this year, I blogged about the need to do more than just put a price on GHGs in order to incentivize efficient technological progress. But I also argued that carbon pricing is critical to the fight, because it helps communicate the full societal cost of using different energy sources, and thus to bend the economy away from carbon-intensive fuels. 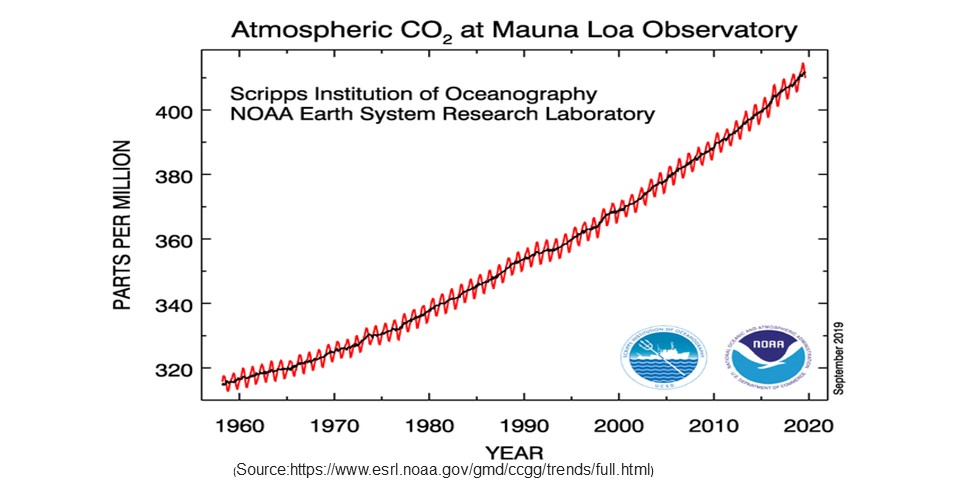 Today, I want to drill down a bit on where that bending is likely to come from. A bit of simple arithmetic suggests that it probably isn’t going to be from a reduction in the consumption of energy services. Rather, carbon pricing will help to decarbonize economies by driving substitution among energy sources.

Let’s consider a price of $50 per metric tonne of CO2, which I pick both because it is around the latest estimate of the Social Cost of Carbon, and because it is higher than the price that any state or country imposes on most of its GHG emissions, so it’s probably pushing the envelope on political feasibility.

Fully passed through to end-use consumers, that $50 price would raise the price of gasoline by about 40 cents per gallon. That is about the same change we see when the price of crude oil moves up or down by $16 per barrel, which has happened numerous times in the last decade. Many analyses of gasoline demand — and just looking at traffic congestion and vehicle sizes in developed countries — demonstrate that 40 cents per gallon does little to change driving behavior. (The data and research on which I base these conclusions about the long-run impact on energy consumption are presented in Borenstein, Bushnell, Wolak and Zaragoza-Watkins, “Expecting the Unexpected: Emissions Uncertainty and Environmental Market Design”, forthcoming in American Economic Review, and the paper’s online appendix.) 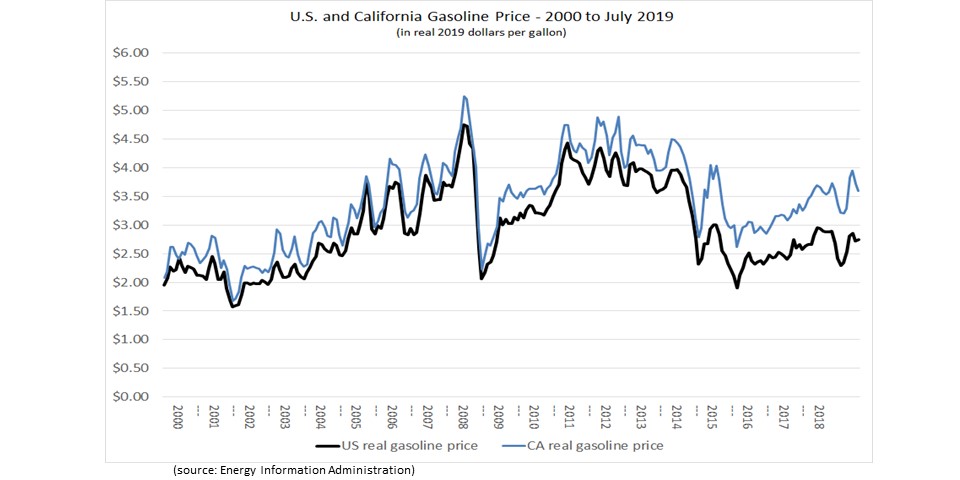 Similarly, $50 per tonne raises the cost of producing electricity in an efficient gas-fired generator by about two cents per kilowatt-hour, or about 18% of the average retail electricity price in the U.S. (a much lower percentage in California). Electricity demand is also pretty price-insensitive, and such a change would almost surely have a small effect – less than 10% — on consumption.

When it comes to natural gas, that $50 carbon price would add more to the average residential and commercial price in the U.S., about 30%. But studies show that even that would have only a modest impact on thermostat settings, building insulation levels, or hot water use.

So, if pricing carbon isn’t going to do much to change the miles we drive, the amount of lighting we use, or the temperatures of our homes and commercial buildings, why do I still think it is critical to the fight against climate change? Because it can change the technologies we use to do all of those things. Pricing carbon won’t change consumption of energy services by much, but it can get us to lower carbon emissions from that consumption.

And, importantly, it will give firms and consumers incentives to find the areas where lower-carbon technologies can substitute most easily today without disrupting the uses where low-carbon alternatives aren’t yet close to cost competitive, such as air transportation and some industrial processes. We need to keep working on innovation where the alternatives are expensive, while picking the low-hanging fruit today in the many places they already exist.

$50 per tonne raises the cost of electricity from coal-fired generation by about 5 cents per kWh. In most markets, that alone would be enough to price it out of the generation market — compared to gas-fired generation, wind, solar, and hydro — even if we didn’t count the damage from sulfur, mercury, and fine particulates. 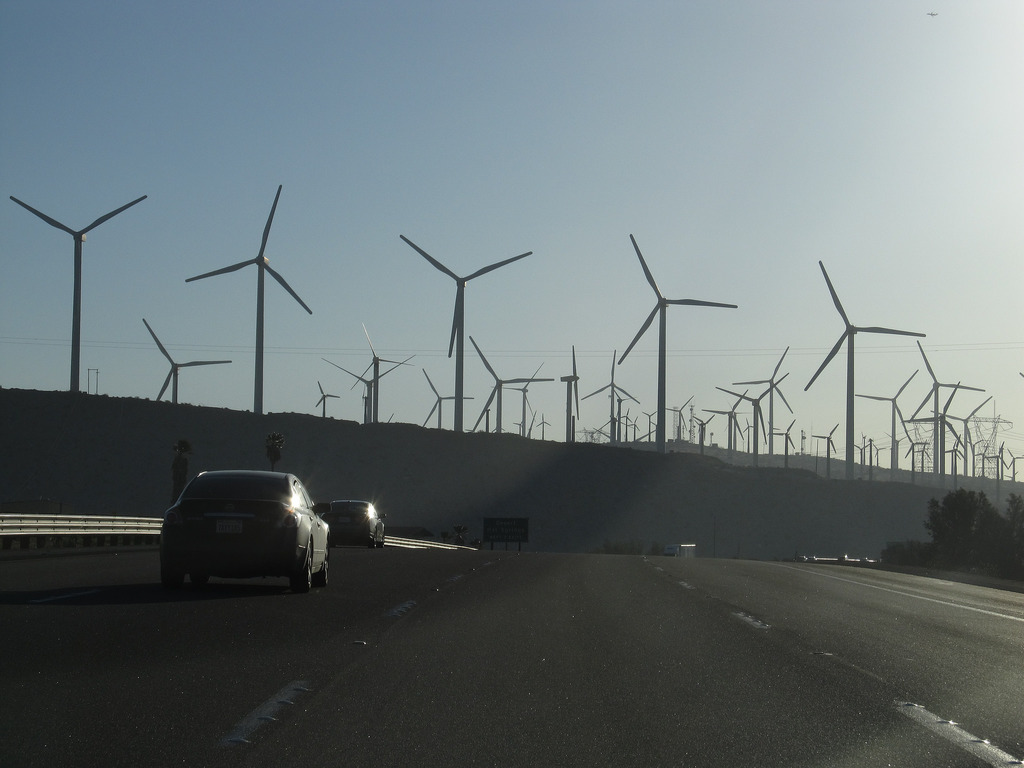 And while the $0.02/kWh cost that such a carbon price imposes on gas-fired generation wouldn’t lower electricity consumption by much, it would greatly boost the competitiveness of wind, solar, and other near-zero carbon generation alternatives. It would also slow or stop the shuttering of existing nuclear power plants, which produce nearly 20% of U.S. electricity carbon free. (It wouldn’t do much to make new nukes competitive, as recent experience again suggests they are massively expensive.)

Even with recent progress in storage technologies, we aren’t at the point today that most grids can operate cost competitively without some natural gas generation, but a carbon price would push generators and grid operators to explore all alternatives.

The same goes for driving natural gas combustion out of buildings and many industrial uses. Even as the electrical grid gets cleaner, displacing gas in these uses will be slower if we don’t price it to reflect the damaging externalities from such end-use combustion. (It would also help if we more accurately priced electricity to reflect its true societal cost, as I discussed last year and last month.)

Electric vehicles, powered by a low-carbon grid, seem to be the most feasible route to decarbonizing transportation. Adding $0.40 per gallon to the price of gasoline won’t make the difference today, but as battery and EV technologies improve, such a carbon price could accelerate their pathway to cost parity. Ditto for biofuels if those technologies happen to make faster progress than EVs.

So, a serious price on GHGs would already be pushing down the carbon intensity of electricity generation, and could make a substantial difference in substituting away from natural gas in end-use combustion and petroleum in transportation.

Not the Only Tool, But an Important One

But can we say with certainty that $50/tonne, or even $100/tonne, would reverse the destructive trend in GHG emissions and solve climate change? The only honest answer is no. We don’t know the price that will get us to where we need to go on emissions, because we don’t know how technologies and costs — of both alternative energy and fossil fuels — will evolve (which I blogged about last year). And if we are being completely honest, we don’t even know exactly where we need to get to on emissions.

What we do know is that the impacts of climate change are appearing faster than most predictions from even a few years ago. And we know that rapid reductions in GHGs are what scientists prescribe. Pricing carbon isn’t the only tool we have, but it is key to finding the areas where we can substitute among energy sources most cost effectively. And that is key to finding a climate change strategy that all (reasonable) policy makers can agree on.

6 thoughts on “What Can Carbon Pricing Do?” Leave a comment ›