This was a hot summer. July 2019 was the hottest month ever recorded globally. Even in temperate Oakland, California, where I live, there were a lot of people wishing they had air conditioning.

In Oakland it only gets hot a few weeks a year. We don’t need the latest most energy-efficient air conditioner. So why don’t you see my neighbors going out to buy cheap air conditioners?

Weather varies enormously across these states, but air conditioner standards do not. A one-size-fits-all standard requires too much energy-efficiency in states like California and not enough in states like Florida. This coarseness is one of the major limitations of standards, and one of the key disadvantages of standards relative to price-based policies.

The map below plots annual cooling hours by state. This is the number of hours per year for which a household should expect to use an air conditioner. 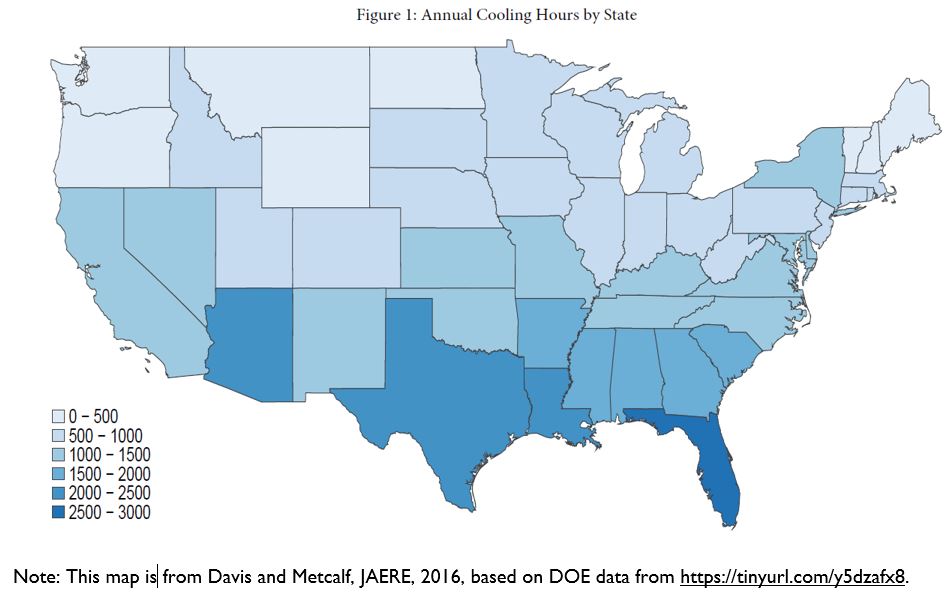 Americans experience an average of 1265 “full-load” cooling hours per year, but there is large geographic variation. Within the continental United States average annual cooling hours range from 310 in Maine to 2,771 in Florida, almost a 9∶1 ratio.

Differences across individual cities are even larger, from below 250 in cities like San Francisco, to 3,900 in Miami and even a whopping 4,500 in Key West, FL (yikes!). Oakland is a bit warmer than San Francisco, but still has only a tiny fraction of the cooling hours experienced elsewhere.

If you were expecting standards to reflect this underlying variation, you are going to be deeply disappointed. Up until recently, there was only a single national standard for central air conditioners. It didn’t matter where you lived or what your weather was like, there was a single one-size-fits-all standard.

Since 2015, we’ve had separate standards for “North” and “South”. Many people worked hard to get this regional-differentiation in place. This is a step in the right direction. It just doesn’t go nearly far enough. Two regions can’t capture the underlying richness in demand for cooling.

I don’t think more regions is the answer. Even just within the Bay Area, cooling hours vary significantly depending on exactly where you live, and I can’t imagine the logistical, administrative, and legal challenges of moving to a system with hundreds of different stringencies.

Too Much of a Good Thing?

So what? Can you really have “too much” energy-efficiency?  Yes. We’d all prefer an air conditioner that costs less to operate, just like we’d all prefer a car with higher MPG, but it costs more.

I have no idea if $556 is the right number. The academic research on this is quite mixed (see, e.g., here, here, and here). But if it were free to increase SEER then all the manufacturers would be doing it. In fact, the very existence of the “North”/”South” duel standard is an acknowledgment of a cost-efficiency tradeoff.

The broader point is that, regardless of the exact magnitude of the tradeoff, energy-efficient air conditioners matter more for Key West than they do for Oakland. Standards are not an effective tool for getting this allocation right.

This Isn’t Just About Air Conditioners

Air conditioners are a particularly lucid example. But the exact same issue arises with natural gas furnaces. In the United States, heating hours vary even more than cooling hours. The DOE’s two (or in some cases three) regions are too inflexible to capture this richness.

A similar issue arises also with cars and trucks. Some people have long commutes and drive 20,000+ miles per year. Others bike to work and leave their cars mostly in the garage. With passenger vehicles, we have a “fleet average” standard, which builds in some inherent flexibility, but there is still too little attention paid to this underlying variation in usage.

Yes, even light bulbs. My colleague Catherine Wolfram has written about the incandescent “relic” in her basement that gets only 20 minutes of usage a year (10 minutes at Halloween and 10 minutes at Christmas). LEDs have come down so much in price that perhaps it doesn’t make much difference, but current lightbulb standards lump Catherine’s basement bulb right along with bulbs used 1000s of hours a year.

Better information would help too. All major appliances in the United States are required to be sold with yellow EnergyGuide labels. However, the current labels provide only very coarse information based on national average usage. In a recent paper, economist Gib Metcalf and I use an online experiment to show that better labels would lead to significantly better decisions. The average energy-efficiency of selected air conditioners stays about the same, but the allocation is much better. That is, consumers facing high operating costs invest more in energy-efficiency, while consumers facing low operating costs invest less.

U.S. energy-efficiency requirements for air conditioners are simply too coarse an instrument to reflect the underlying variation in usage. This coarseness misses the variation in greenhouse gas emission reductions, too. This is not the only limitation with standards, however. Economists have also pointed out that standards can discourage consumers from buying a product at all.  Come to think of it, maybe I’ll just keep using a fan. 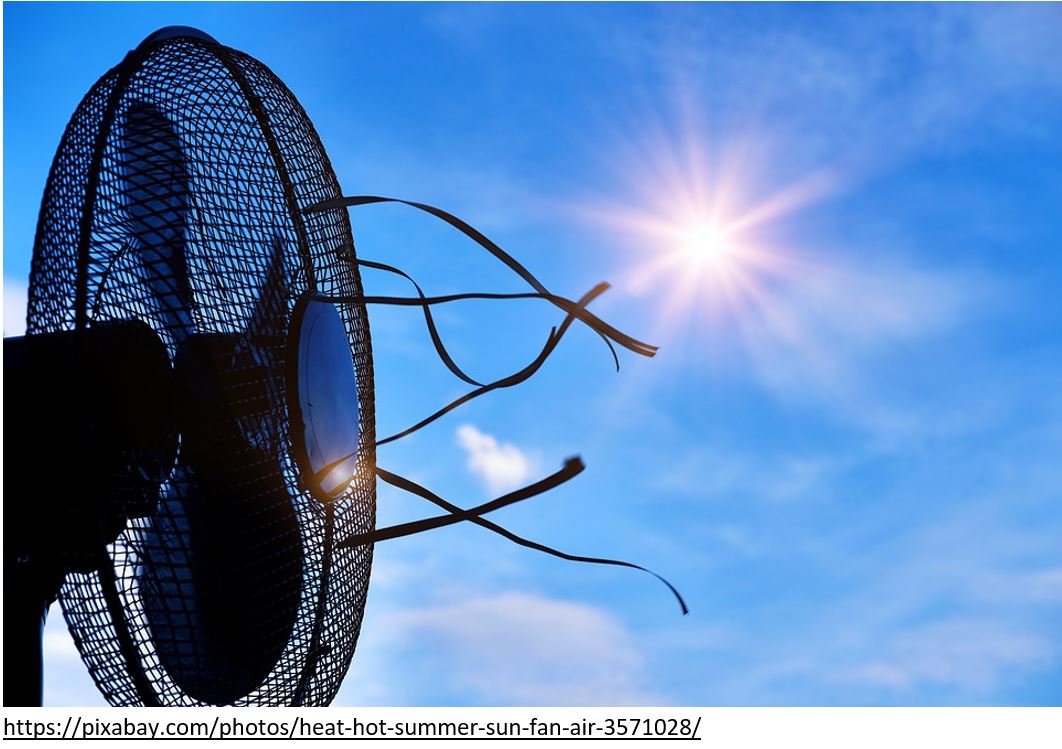