This post is co-authored with Edward Rubin and Reed Walker.

As the remote-sensing revolution fills our air-pollution blind spots, how should regulation respond?

According to the Index of Objects Launched into Outer Space, there are 4,987 satellites orbiting our planet right now. 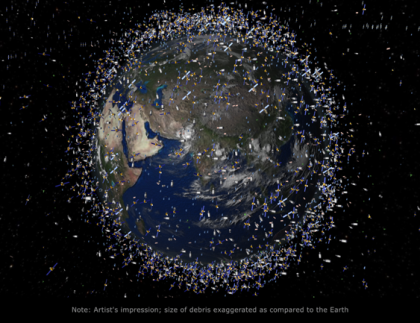 These satellites are transforming the way we live on earth. Satellite-based systems have revolutionized how we find our way around, how we communicate, how we predict the weather, how we detect forest fires, how we find things that are lost.

For many of these examples, it’s clear how remote-sensing makes the world a better place. If you can detect a forest fire, you put it out. If you get lost, ask Siri (aka A-GPS). But not all applications are this direct. We’ve been thinking about one high-stakes application- the remote sensing of tiny particulate pollution- where the appropriate policy response is not yet clear.

Since the 1970s, standards designed to protect the public health with “an adequate margin of safety” have been used to keep monitored particulate pollution levels across the U.S. below a designated threshold. Compliance with these standards has historically been assessed using a network of on-the-ground monitors. Siting regulations aim to ensure that these monitors collect “representative” pollution exposure measurements.

The map below summarizes the average annual values of PM2.5 monitor readings (at the county level).

The EPA PM2.5 monitoring network: This map illustrates the annual average PM2.5 concentration from the EPA’s monitor data in 2005, for the counties in which the EPA monitors PM2.5. More than 80% of U.S. counties do not have a PM2.5 monitor.

This network of fewer than 1200 monitors is sparse. Especially when you consider that particulate air pollution levels can vary a lot over space. In other words, the quality of the air that we breathe may be very different from the air quality recorded by a distant monitor that “represents” us.

This is pretty amazing when you think about it. We are launching huge satellites into space—orbiting more than 400 miles above Earth’s surface—and using them to monitor particles that are less than 1/10 the width of a human hair.  When you plot these annual satellite-based estimates on a map they look like this:

Wow—it’s like I was air-pollution blind, but now I see!

However, with air-pollution concentrations/estimates, seeing is not quite the same as believing. And using this information to steer on-the-ground action is complicated for at least three reasons.

The first challenge is that particulate pollution in one place may result from a complicated combination of sources—some of which may be far from the location that registers high PM2.5 levels. When you see red (or orange or yellow) on the satellite-based map, it’s not as easy as throwing water on the fire. We need a lot more information to identify and address the sources of the air-quality problem.

On-the-ground EPA monitors directly and precisely measure pollution concentrations at a point in space and time (although some recent work raises concerns about where and when EPA monitor readings are made). In contrast, it requires a lot of scientific modeling and statistical prediction to convert satellite data to ground-level PM2.5 concentrations.

Our first attempt at quantifying the imprecision in these satellite-based estimates suggests that there is indeed a lot of noise — and possibly bias at higher concentrations. This complicates how we can use and act on these estimates.

An economist’s textbook prescription for this air pollution problem might be something along the lines of (1) estimate the health and economic damages associated with air pollution exposure; (2) trace the pollution back to the source; (3) price the pollution so that sources internalize these damage costs. Easier said than done!

In fact, we currently use a threshold-based approach which is most consistent with pollution damages that change substantially at the threshold (i.e. low damages below and high damages above). In contrast, research on the health impacts of air pollution exposure has yet to identify a level of PM2.5 exposure that is safe. Some recent work suggests that the health benefits from incremental reductions in PM2.5 exposure could be decreasing with baseline levels. This apparent mismatch between our policy instrument and the pollution problem we are trying to mitigate further complicates matters.

These complications notwithstanding, we can use the satellite-based estimates to assess the potential for policy implementation “errors”. Given the extent of our air pollution blind spots, it seems likely that we have been misclassifying some areas as meeting PM2.5 pollution standards (“attainment” in the EPA’s parlance) while misclassifying other areas as out failing to meet standards (“non-attainment”).

In this new paper, we compare satellite-based estimates of annual air quality mapped to the neighborhood (i.e., “census block level”) against associated EPA monitor-based designations. Through this comparison, we assess how many people appear to have been breathing air that is dirtier—or cleaner—than their county-level, Clean Air Act attainment status suggests. Given complicating factor #1, we are not suggesting that standards should be imposed at the neighborhood level. Given complicating factors #2 and #3, we need to be careful in our interpretation of these comparisons.

The figure below summarizes the two types of errors we investigate. Average EPA monitor readings (from 2005) are measured on the horizontal axis. At that time, the EPA’s threshold was  15㎍/m3— to be designated “in attainment” you want to be on the left side 15. The dark bars summarize corresponding ranges of satellite-based estimates (dots above and below are outliers).

If we take satellite-based estimates as precise measures of the truth, the grey area represents “false negative” errors– neighborhoods where the regulatory measurements used by the EPA suggest compliance with the standard, but satellite-based measurements mapped to the neighborhood level suggest otherwise. We estimate that 1-6 million people were living in neighborhoods deemed “in attainment” by county-level EPA monitor readings in the mid-2000s, but were exposed to air quality that violated the national standard.[1] Once we account for prediction error, however, we cannot rule out numbers as small as 0 or as large as 134 million people!

What about false positives? Satellite-based estimates suggest that 33-43 million people were living in designated “non-attainment” areas where, in fact, air quality met (or was better than) the standard. Accounting for the uncertainty in these estimates, we cannot rule out numbers in the range of 0-44 million. It’s important to note that these false positives could be associated with net positive outcomes if health benefits from being incorrectly designated exceeded the compliance costs.

Satellite-based estimates—and a proliferation of low-cost sensors —are transforming our understanding of air pollution exposure: where it happens, when it happens, and how it happens. The quality and scope of these data are rapidly improving. It seems the sky’s the limit.

But when it comes to translating this information into regulatory action, we have some work to do. It’s not yet clear to us whether our increasingly rich understanding of particulate pollution problems merits refinements or a complete re-invention of the policy response.  If policy innovation can catch up with scientific discovery,  a revolution that started in space could transform air quality monitoring and improvement efforts on the ground.

[1] This thought-provoking  paper by our colleagues at RFF estimates 24 million people using a more recent pollution standard and time period.