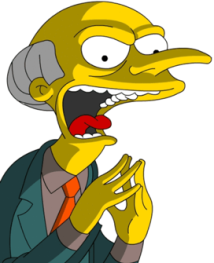 Mr. Burns is a beloved character on the Simpsons. While most humans think of him as the owner of an evil corporation, most economists would regard him simply as the personification of a profit maximizing enterprise. The assumption of profit maximization is a natural one, which sometimes gets translated into “maximizing shareholder value”. The vast majority of firms fall into this category, trying to make the difference between the money they take in and the money they expend as big as possible. Yes, I realize there are co-ops selling bagels, who do not pray at the altar of profit maximization, but Berkeley bagel co-ops are simply not a significant part of the economy. Deal with it.

Most firms operate in competitive markets, which keep them from charging very high prices.  For example, when there is a large number of firms selling an identical product, a firm cannot arbitrarily charge what it wants, but has to charge the market price.

Now do firms want to charge more than the cost of making that last unit? Of course! If you’re able to do this, you’ve got what economists call market power. If you’re the only firm selling a good with no close substitutes like diamonds (I dare you to sell a cubic zirconia as a close substitute when you propose to the love of your life), you can charge a nice markup over your costs of production. If you are one of two firms in a market, you can still charge a markup, but slightly less since there is more competition and so on. Measuring the degree to which firms jack up prices is really hard statistically. Some of my colleagues have made fortunes testifying as expert witnesses in court showing that firms do or do not exercise market power like a monopoly would.

Market power generates what we call Dead Weight Loss (an easier way to think about it is that it does not let us maximize the size of the economic pie we can bake with the ingredients available to us).  But beyond that these firms have been shown to be slower to innovate and to sometimes produce lower quality goods.

A number of economic all stars have built big fancy models to measure market power in different industries and made careers and castles out of these methods. But watch out. There is a new kid on the block. He is the Energy Institute’s own Ironman – Matt Woerman –  and on the job market this year with what I can only describe as a beautiful paper at the intersection of Industrial Organization and Energy Economics.

He has identified a unique setting, which lets him measure market power in a credibly causal fashion without having to impose a massive structural model. Much of what has been written so far has focused on the effect of market structure (e.g. the number of firms) on market power, which is tricky to do empirically as market structure is a result of many of the same things that drive price, so it is hard to tell what is causing what. Variation in market structure that one can exploit statistically to determine impact on price is hard to come by.

Matt overcomes this major challenge in a quite brilliant way, which builds on his extensive knowledge of how electricity markets function – both economically and physically. The electricity market relies on power plants to generate electricity, which then gets shipped via wires to the customers, who consume it. Transmission lines, like pipelines, have limited capacity and they become congested during certain times of high demand. It is important to note that usually not all transmission lines become congested at once, but different lines become congested at different times. To make things even more interesting, demand shocks in one location can create congestion in an entirely different part of the network for reasons better explained by a power system engineer. What this means is that some generators become “isolated” at certain times and since the ability to meet demand via generators elsewhere is hampered, they can exercise local market power – meaning raise their prices. Hear me Smithers, it’s hot outside, raise the price! The degree of isolation can vary across a single day.

This is a really beautiful setting to measure market power. Electrons are electrons, hence there is no product differentiation. Also the very short run demand for electricity is pretty much fixed and hence this does away with the need to estimate a demand function. Next, power plants have a very simple production process – (mostly fossil) fuels in, electricity out – which allows for straightforward estimation of the marginal costs of production from the available data. Finally, there is a centralized market for electricity in Texas, which does away with the complexities of having to deal with contracting issues. The rules facing generators are the same for all generators and Texas is an island in terms of its electricity market, as it is not linked in major ways to the other grids in the US.

Matt’s data are rich to say the least. He observes each generator’s offer curve, meaning how much electricity each generator is willing to sell at what price, at an incredibly high temporal resolution. He observes each plant’s technology and input use and hence can calculate each firm’s marginal cost curve. Using these data he can calculate firm specific markups at 15 minute intervals! This should make most economists jealous. He further observes transmission, and hence congestions, at five minute intervals. He hence has variation in market size both across space and time! Jealous? I am!

In order to get exogenous variation in congestion he exploits fluctuations in temperature. I fully realize that we as a discipline are writing too many papers that contain temperature regressions, but here this is an incredibly smart way to employ a statistical model that has temperature on the right hand side. When it gets hot transmission lines can transmit less electricity. Hence temperature generates exogenous variation in congestion, since the “wire gets smaller” when it’s hot. Of course, hot weather affects more than just transmission line capacity. But the topology of the network means that Matt can use congestion generated by temperature shocks in other locations while controlling for local demand/temperature conditions.  For the nerds among you, he pulls this off with some clever econometrics, which include machine learning of course (since this seems like the rite of passage these days).

He finds economically and statistically significant effects. On a really hot Texas day (40C/104F or hotter, which occur not too infrequently in the summer), a power plant’ s market size decreases by roughly 10% compared to a time with moderate temperatures. During these events, markups are 140-200% higher than at a comfortable period. He also shows interesting heterogeneity depending on the composition and ownership of plants in the market. This is a beautiful paper. I loved watching it evolve. Like the best social science research should, it teaches us something meaningful about firm behavior in a clear, well-designed way. Mr. Burns sure will not be happy that a smart Berkeley graduate student figured out his game, which will surely attract the attention of regulators.