One delightful aspect of teaching an MBA course in energy and environmental markets is getting together with my former students as they pursue careers in the industries I study.  I learn so much about the latest trends and ideas in these markets, and they frequently challenge the way I have been seeing the world.

This happened recently when I had coffee with a former student whom I will refer to as “Pat”.  Pat has worked for a successful alternative energy company and done well, but s/he is ready to think about new paths.  Like many cleantech mavens, Pat is excited about distributed generation (DG), particularly with improving storage technologies.  Pat explained to me a potential business model s/he has been exploring with rooftop solar photovoltaic (PV) panels and on-site storage.

As I’ve written in a previous blog, I’m skeptical that rooftop solar is the most cost effective way to utilize the fabulous breakthroughs in PV technology.  I proceeded to lay out my argument, addressing each of the claims for distributed generation, even though I know Pat is a regular reader of the Energy Institute blog and had surely heard my views before.

But Pat was a star student and continues to be one of the most insightful people I know in the business.  So I was not surprised, but still unsettled, when Pat put on the table an argument for DG that I hadn’t heard before, or maybe Pat just presented it much more clearly so that I finally actually got it. 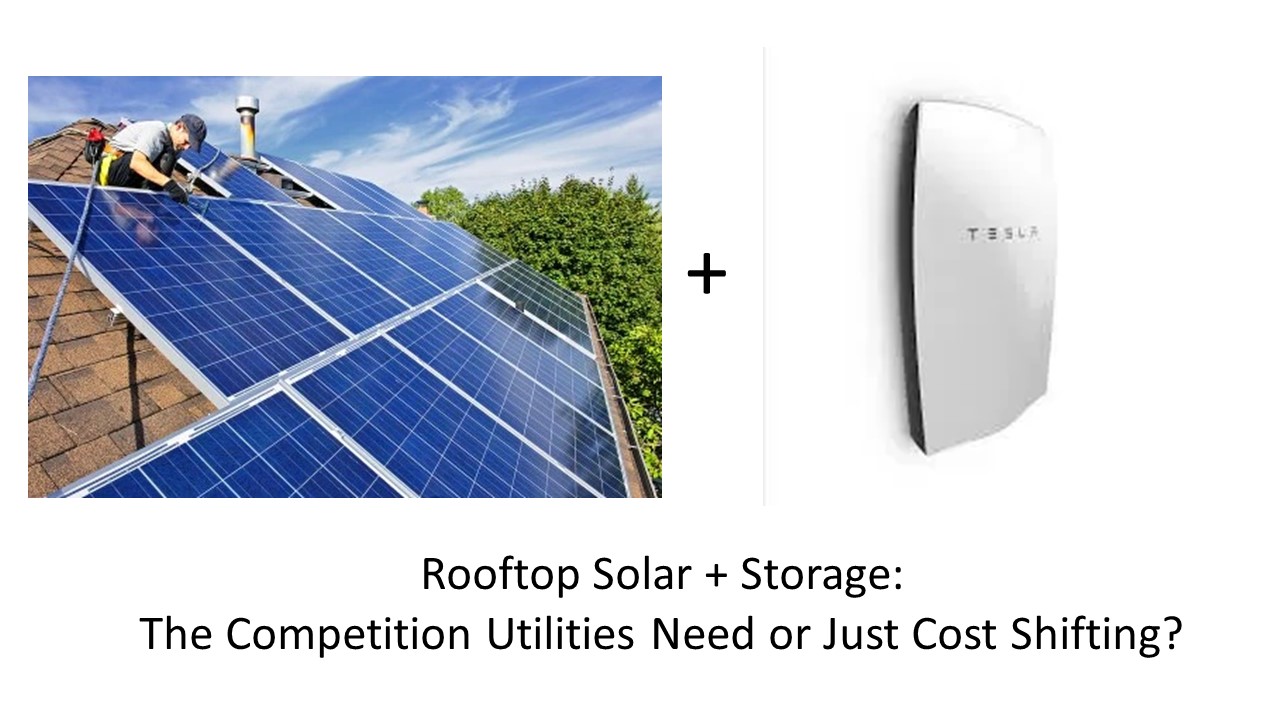 Here’s my dramatic (if you are an energy geek) re-creation of what Pat said: “Yes, Severin, in theory grid scale generation and delivery of renewable electricity generation is probably more cost-effective.  And, yes, there are some fixed cost of distribution systems that utilities are recovering through volumetric charges, which drives up the retail price and gives an inefficient incentive to install DG.  And, yes, California’s extreme increasing-block residential price schedules mean many households are paying more than 30 cents per kWh for much of their consumption, way above cost.”

“But,” Pat continued with growing enthusiasm, “California’s investor-owned utilities currently charge average residential rates in the 21 to 24 cent range –more than 50% above national average–and the utilities themselves are forecasting those numbers will rise in the coming years.  [Actually those are average rates among customers who aren’t on the low-income tariff.  More on that below. –SB]  I don’t know if rates are so high because of utility incompetence, a dysfunctional regulatory process, or some other reason, but it’s not my job to figure it out.  In any other industry, if a company’s prices are too high we rely on pressure from competition to reign them in.  Why should electricity be any different?”

Pat concluded with, “Severin, ever since I took your class many years ago you’ve been saying that California has high electricity rates in part to pay for the mistakes of the past.  But those ‘mistakes’ keep happening and keep driving up our rates.  At some point, aren’t those ongoing mistakes just part of a broken regulatory process? DG is the competition that will either force repairs in the process or will replace it.”

Pat’s argument isn’t entirely general; there are plenty of states — and even some municipal utilities in California — with rates that rooftop solar can’t touch.  And, there’s not much evidence nationally or internationally that competition introduced by deregulating retail electricity markets has significantly lowered rates.   Plus, it’s worth remembering that most residential customers don’t have a single-family home with a south-facing roof and no shading to put solar panels on, so most of us have to get all our electricity from the grid.

Nonetheless, Pat raises an important point.  Before proponents of high fixed charges and special fees for solar customers get too far down that road, they need to confront the fact that average residential electricity rates in California (and New York, and some other locations where DG is gaining the most traction) are out of line with the rest of the country.

I’ve been asking around about the high, and rising, average residential rates in California, and been surprised at the lack of clarity for the reasons. This seems like a central question of rooftop solar policy (as opposed to rooftop solar politics).  If the rates really reflect high costs of providing electricity, Pat and other DG supporters have a more compelling case that they are providing efficient competition.  On the other hand, if they are driven by other regulatory or legislative policy objectives, then we have to recognize that funding them in this way may encourage inefficient DG installation.

Put differently, is DG the answer to regulatory dysfunction, or is it just regulatory arbitrage? By regulatory arbitrage, I mean taking advantage of the structure of pricing or other utility obligations by pursuing strategies that reap private rewards through cost shifts to other ratepayers.

The simplest cause of regulatory arbitrage is the fact that electricity prices are well above the marginal cost of delivering a kilowatt-hour to the customer in California and many other states. In California, this is in part because of the regulator’s longtime resistance to fixed monthly charges, and in part because of the increasing-block price structure that leaves many customers today paying over 30 cents for their incremental kilowatt-hour.

If all of these programs were eliminated, would average residential rates among California’s IOUs still be well above national average?   Of course, there are other factors that a cost analysis has to account for, such as the mix of generation, the density of residential consumers and the average consumption per customer.

I think that answering this question is critical to making good energy policy in California.  But after asking a number of regulators, utilities and other policy analysts in the state, I have not turned up any studies that put together all the numbers one needs.

That wouldn’t be the complete answer to Pat’s argument. It has to be paired with a credible analysis of the value and costs DG brings to the grid. But next time I see Pat, I’m hoping to have a better response than “good question. I should write a blog about that.”

32 thoughts on “Is Distributed Generation the Answer to Regulatory Dysfunction?” Leave a comment ›