The California Public Utilities Commission is moving closer to major changes in the steeply increasing-block residential electricity rates that the state has had since the 2000-01 California electricity crisis.  This Friday the Commissioners may decide to significantly flatten the tiered rate structure.  In a blog post last fall, I discussed the inefficiency of charging tiered prices that don’t reflect cost and the unfairness of charging different customers different prices for the same good – a kilowatt-hour (kWh) of electricity.

In that blog, I also addressed the three standard arguments that defenders of such steeply tiered pricing commonly put forward.  The first is that increasing-block pricing yields conservation.  While in theory this could happen, the best empirical work on this subject, by (my former student) Professor Koichiro Ito shows that it is likely to have about zero effect on overall consumption.  It does encourage high-consumers to consume less, but it also encourages lower-using households to consume more.  Professor Ito shows that the net effect is no reduction in overall consumption.

The second argument is that supplying electricity to high-use households is more expensive per kWh on average, because they consume more at peak times.  My own research has shown the difference is so small that it would justify less than a one-cent differential in price between high-use and low-use customers.

The third argument carries the most weight, that higher-use customers are on average higher-income customers.  That’s true, as I showed in research published in 2012, using household consumption data from 2006.  However, like most states, California has a separate tariff for the lowest-income customers: households up to 200% of poverty-level income are eligible for the CARE program and pay much lower rates.  With the CARE program now covering about 30% of all residential customers, is tiered pricing in the standard residential rate an effective way to help lower-income households?

My 2012 paper just showed the average bill change for households in each income bracket, not the distribution of changes within each bracket.  There is another issue of equity if a program designed to transfer wealth from high-income to low-income households actually does a poor job of targeting either group, harming many low-income and/or benefitting many high-income customers.  This week I went back to the usage data from 2006 to see how great of a concern that should be.

Using PG&E data, I applied my earlier work on usage and household income to current electricity rates and the flatter tariff that a CPUC administrative law judge has proposed.  I estimated the range of impacts the proposed change would have on households across the income spectrum. 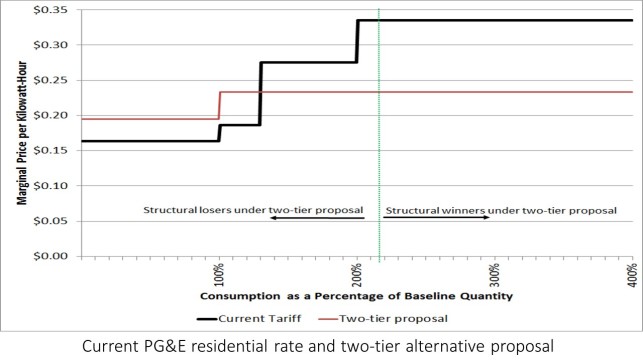 The figure above shows Pacific Gas & Electric’s current residential rate and an alternative rate that would raise the same revenue, but would have only two tiers with a 20% increase between them, as the ALJ has proposed.[1]  The first thing to note is that the new rate would be higher for consumption out to what is currently the third tier, the point where the two lines cross at 130% of baseline quantity.  In order to be a “structural” winner with the flatter rate – that is, paying less without changing consumption at all — the household would have to be consuming out beyond the crossing point in order to offset the higher marginal prices for the lower kWhs.

In this case, the breakeven point is at 216% of baseline quantity.  The median household consumes about 130% of baseline quantity, so that means most households would pay more.  By my calculation about 21% of households would save, while about 79% would see a bill increase if no one changed consumption.   This reflects the fact that since the electricity crisis the great majority of price increases have been placed on the highest-use customers, resulting in the steep tiers.

Using census data and applying a statistical matching method I developed in the 2012 research, I estimated into which of 5 income bracket each household falls.   I focused on the customers who are not on CARE, because CARE households are on a separate tariff.   The 5 income brackets are based on census categories that are roughly equal parts of the entire population.  As the table shows, however, in this analysis the bottom two brackets are smaller due to the substantial participation in CARE.

Next, I calculated how much the average monthly bill of each household would change if the rate were changed to the two-tiered structure in the figure above (and the household did not change its consumption).  The third row of the table above shows the average bill change for households in each income bracket.  Not surprisingly, because lower income households consume less on average, they are more likely to see their bills go up with the change.  But even in the highest income bracket more than two-thirds of customers would see bill increases.

What was particularly surprising to me is the figure below, which shows the distribution of the change in bills for each of the income brackets.  The impacts across brackets are more similar than I expected.     In every income bracket two-thirds or more of the customers see their bills rise between $0 and $20 per month, even in the highest-income bracket.  Are these high-income households that don’t use much electricity super-conservers?  Maybe, but I bet many of them are households with only one or two people, who work and travel a lot, and don’t spend much time at home. 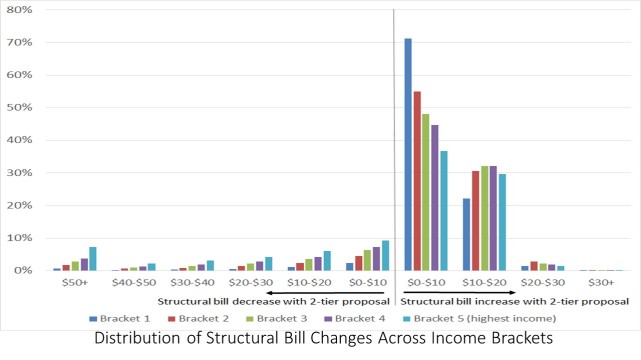 About 4% of households are the biggest winners with bills dropping by at least $50 per month under the proposed tariff.  Are these “energy hogs”? Maybe, but I bet some of them are big families and people who are home all day, because they are retired or have small children.   Among these biggest winners, I estimate that slightly less than half are in the highest-income bracket.

Undoing the steeply tiered rates that were created during California’s electricity crisis will on average cause lower-income households to pay more.  If there were no other consequences of the steep tiering, I could see keeping it on that basis.  But there are other impacts on both efficiency and fairness, not the least of which is the monthly harm to higher-consuming, middle- and lower-income households that is caused by a rate structure that has no basis in costs.

Some opponents of the two-tiered rate proposal have presented it as a simple shift of payments from poor to rich.  This analysis shows that the story is not that simple.  Both winners and losers are present at every income level.  The two-tier proposal makes bills more cost-based and more proportional to usage, as they were before 2000.  And as they are in nearly all other states, and in the parts of California served by municipal utilities.