On this blog we are supposed to write insightful things about energy markets, but I’ve got football on the brain. While the Pats beat the Seahawks in a game everyone watched, my family and I spent the day on an empty beach in San Francisco. This made me contemplate the behavioral responses of individuals to major sporting events and what this means for utilities across the globe.

The news focused on the fact that for the first time, this crown jewel of sporting events that exactly one country watches, was played under LED lights. This is exciting news! The stadium installed 44,928 LED lamps, which need only 310,000 Watts of power compared to the old metal halide bulbs, which used 1.24 million Watts. This capital investment not only reduced energy consumption by a whopping 75% but provided more even light (fewer shadows) which both players and high definition video cameras like. Further, LED lamps are on immediately while the old sort takes 20 minutes to ramp up to full brightness. This is the last year the NFL will use roman numerals for the super bowl (because the next one will be number 50 and super bowl L just doesn’t sound manly enough) and the first year we use current technology lights. Out with old, in with the new.

But how much energy did we save? If those lights are on for 8 hours, we have saved 7.44 MWh. That is not chump change. Over a year this is the equivalent amount of energy 406 average California homes use in a whole year. And those lights will be used for a long time, so the savings are not trivial. Are these really all of the energy savings we get from major sporting events? The answer is no.

I am German and in my version of football, if you touch the ball with your hands, you get a penalty. Every four years, the greatest tournament in the world of sports followed in pretty much every country on the globe (yes here too!) is carried out – the Fifa World Cup. For us soccer fanatics, when our country plays, we call in sick, paint our faces, throw on our jerseys and head to a big screen. All of those screens running must mean that load rises drastically – right? Nothing could be further from the truth. TVs, even the big ones, use relatively little electricity. But while watching you fail to engage in activities that do take a lot of power, like doing your laundry or working. Am I making this up? Let me introduce you to the Brasilian soccer powered duck graph: 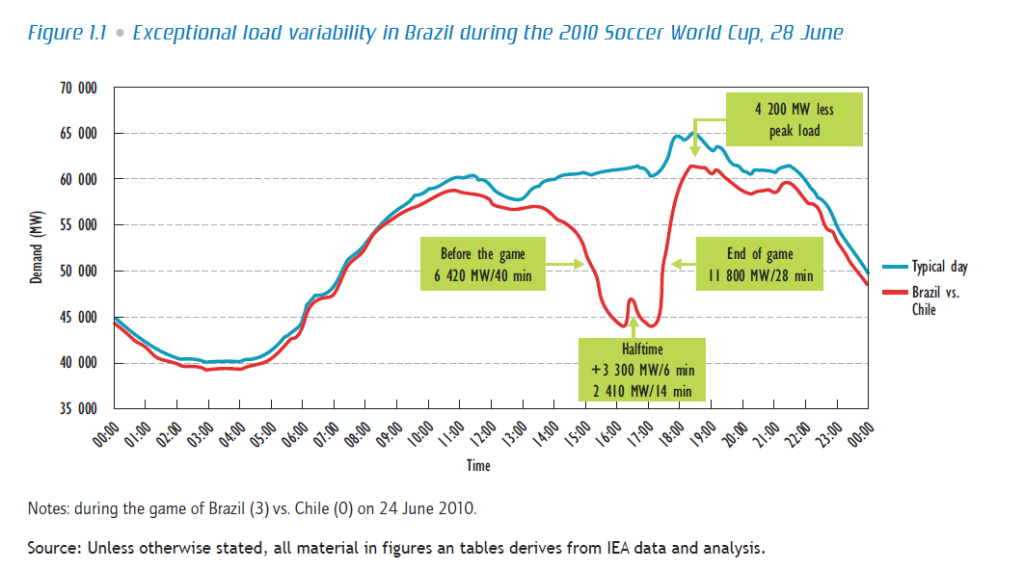 On the 28th of June of 2010 Brasil (one of the greatest teams in the game) played Chile. I don’t need to tell you what time the game took place and when half time happened. The typical day load is about 60 GW and during the game this dropped by 15GW. During half time, there was a brief spike of 3.3 GW (microwaves presumably) and then load dropped again to 45 GW. It is noteworthy that the ramp slopes in this graph are similar to those of some renewable technologies. Other utilities see bunching during sporting events. In the US we see spikes in water use during unimportant portions of the big game (sorry Katy Perry – people need to use the restroom at some point) and in Canada something similar was reported during the Olympic game for the gold medal in hockey.

The policy prescription here is a simple one – schedule sporting events of regional significance during periods of anticipated high peak loads! The NFL could become a major player in Demand Response! All kidding aside, what these simple graphs show is that seemingly trivial things like watching a major soccer game can have massive impacts on a national or regional market. Small changes in behavior matter – if enough people engage in it.

{Note: There was a math error in my original savings calculations, which was pointed out in the comments! It has been fixed in the post.}

7 thoughts on “Football – the Ultimate Demand Side Management Program?” Leave a comment ›