Many of us have argued that a patchwork of national or subnational climate policies is a largely pointless undertaking unless the big two (United States and China) are part of that patchwork. The US has taken some steps towards national regulation recently and there are noises coming out of China that the next five-year plan will contain a significant piece of mitigation policy.

The sooner, the better. The averaged annual growth rate of Chinese emissions over the past decade was 9.1%, which implies a doubling of emissions every eight years.

In order to get emissions under control, there are inflexible standards or price-based mechanisms like cap and trade (CAT) and carbon taxes. The US lacks a national CAT, yet has functioning markets in California and on the East Coast. The EU has the super-national emissions trading system (ETS) supplemented by a significant portfolio of energy efficiency and renewable energy policies.

China has, in the recent past, started a few experimental cap and trade systems, which may well be regarded as blueprints for a larger national market. While trade volumes on these exchanges are relatively thin, the figure below shows that prices vary between 4 and 13 dollars per ton (which is not too far from the price on the California system and the ETS). 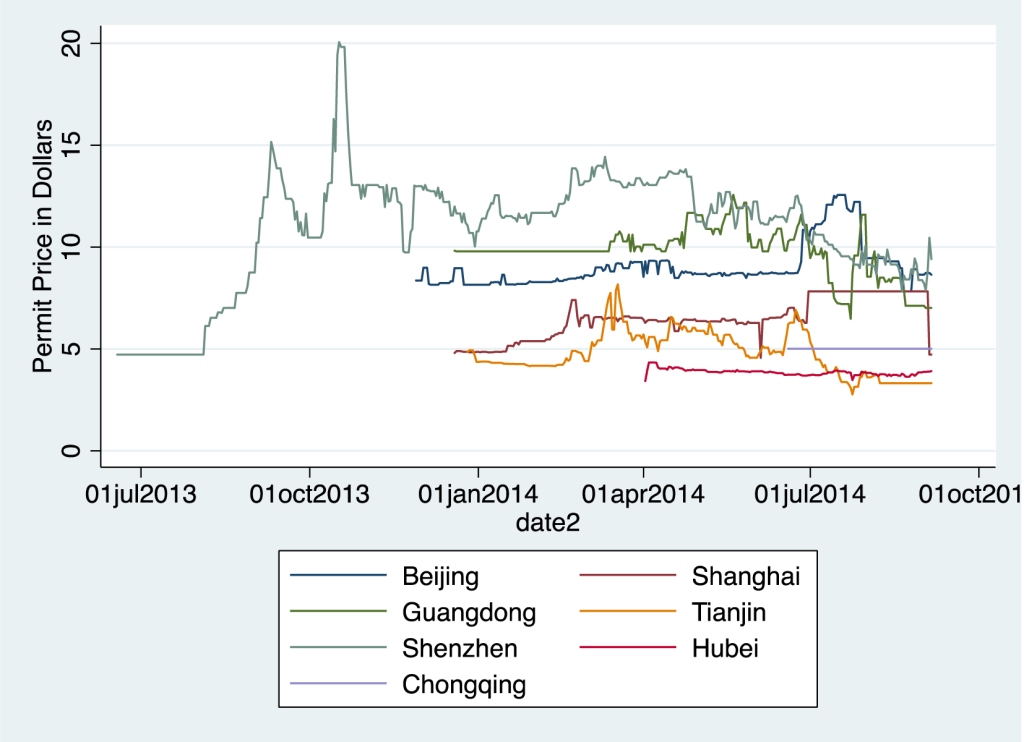 The National Development and Reform Commission, which is the arm of the Chinese government responsible for economic planning, has provided coarse outlines of a national market starting in 2016, which will cover 3-4 billion tons of CO2 with a volume of roughly 65 billion US Dollars by 2020. This is twice the volume of the European market. And some simple algebra suggests that the planners expect permits to trade at just below $20, which is higher than anywhere else in the world currently or in any of the regional markets in China. This is exciting news and will surely provide some significant momentum in the upcoming climate talks.

I am somewhat puzzled by the apparent choice of a national cap and trade system over the other price based alternative to a CAT: a carbon tax. The reason I am puzzled is deeply rooted in some simple political economy. Cap and trade generates valuable assets (permits), which are frequently handed out to carbon intensive industries, which would otherwise fight the regulation and possibly prevent it from being implemented. If the government hands out permits, it gets no revenues from these permits.

A carbon tax, on the other hand, is charged on each carbon atom and most likely charged fairly far upstream the carbon river. It generates revenues for the government (especially at ~$20 a ton). My (limited) understanding of how environmental policy works in China is that industry gets much less say in what regulations will be implemented and how.

Here are a few simple advantages of a carbon tax over cap and trade in an economy that currently does not come close to collecting a universal income tax:

One argument, which is often used against a carbon tax is that it does not guarantee what emissions reductions will be in any given period, as the marginal abatement costs are not known by the regulator. While this is certainly true, Lucas Davis points out from across the hall that with GHGs we care about cumulative emissions. When the marginal benefit of abatement curve is relatively flat, you want the flexibility afforded by taxes.  If costs end up being higher than expected, emission sources can abate less. One clear disadvantage of a tax is that it is somewhat harder to exempt individual sectors/firms from the tax. What this might mean in the Chinese context is that it puts smaller (already inefficient) coal mines at a further competitive disadvantage and risks significant local employment impacts.

The problem with almost all environmental regulation of course is that there will be some winners and some losers, but overall we make the pie bigger. I am thrilled to see the Chinese government get serious about climate regulation, but would hope that serious consideration is given to a tax instead of a cap and trade system. China has significant experience with taxes and the main institutions required to put a new one in place are, well, in place. Setting up a market is hard and the devil is in the details. Just ask California.

3 thoughts on “The Big Stick: Cap and Trade in the Peoples Republic of Carbon” Leave a comment ›