When President Barack Obama took office in 2009, he set a goal of cutting U.S. greenhouse gas emissions by 17 percent of 2005 levels by 2020.  The graph below shows that we appear to be making progress towards meeting this target.  The solid black line tracks domestic GHG emissions in recent years. U.S. emissions have now fallen to their lowest point in two decades!

Researchers have been busy digging into the data to explain this decline in domestic emissions– most of which has occurred in the power sector (a great example of recent work can be found here). Part of the explanation clearly lies with the shale gas boom – and limited opportunities to export natural gas.  The resulting fall in domestic natural gas prices over the 2008-2012 has led to a re-allocation of electricity production from coal to gas-fired generating plants. The broken blue line in the graph shows the increasing share of US electricity generated using natural gas; the broken brown line shows the decline of coal. Increased penetration of renewables has also played a role in reducing coal’s share of electricity production over this period.

The graph also shows that we have a ways to go before we hit President Obama’s 2020 emissions reduction target (denoted by the red line).[1]  Recently announced standards to limit carbon pollution from existing power plants, in conjunction with other environmental regulations such as the mercury rule, are expected to further reduce the share of electricity generated using coal in the years ahead.

In sum, a reduced reliance on coal in the domestic power sector has been – and will continue to be – an important driver of reductions in domestic greenhouse gas emissions. But what is happening to the coal that we’re no longer burning here at home?

Domestic coal consumption down, exports on the rise 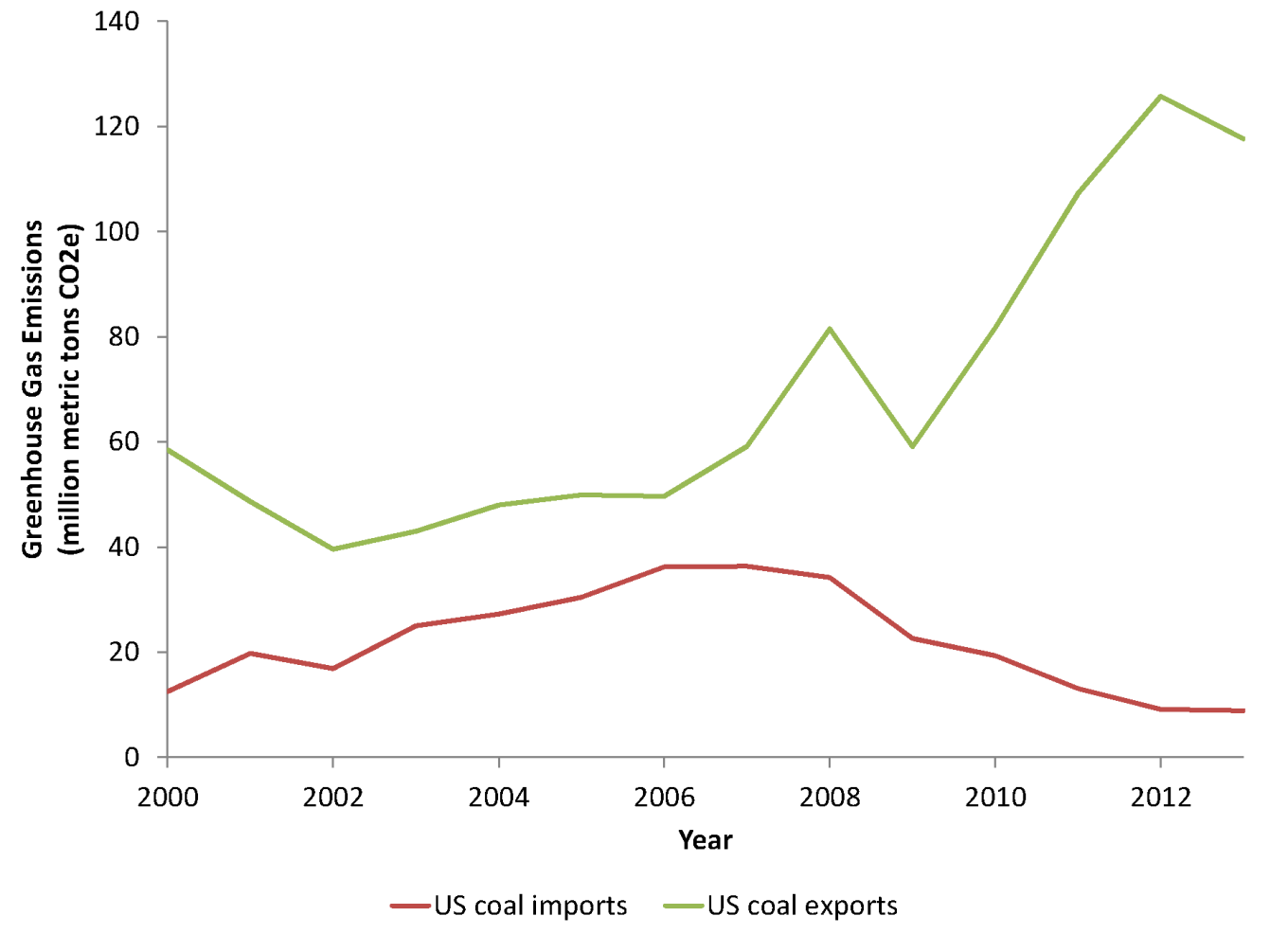 This upward trend in net exports is expected to continue apace, particularly if coal companies succeed in building new coal-export ports in the Northwest. It is estimated that ports under consideration in Oregon and Washington could eventually ship over 100 million tons of coal per year to Asia. These developments have environmentalists urgently questioning the extent to which increased energy exports will undermine carbon emissions reductions achieved within the U.S.

What effect do U.S. coal exports have on global GHG emissions?

To answer this question, we need to make assumptions about what patterns of global energy consumption would look like in a world with and without US coal exports. Not surprisingly, different assumptions can generate very different answers.

Consider, for example, a provocative report released earlier this year by the CO2 Scorecard Group.  This report – which attracted considerable attention in the energy/environment blogosphere- looks to estimate the extent to which increased coal exports have eroded domestic emissions reductions from the shale gas boom.  The authors begin by estimating the impact of the shale gas boom on domestic steam coal exports. They then multiply each exported ton by the EPA-reported average emissions rate of 1.8 metric tons of CO2 per short ton of steam coal consumed in the electric power sector. They conclude that, between 2007-2012, CO2 emissions from coal-to-gas fuel switching were more than offset by increased emissions associated with coal exports.[2]

Importantly, this approach assumes that domestic coal exports act to increase global energy consumption, versus displace coal or other energy sources. In other words, each ton of coal exported is assumed to be additional to – versus substituting for- energy that would otherwise be consumed. In fact, it seems much more likely that some fraction of the coal exported will crowd out other coal supplies. Particularly when you consider that China – with its seemingly insatiable appetite for coal- was the third largest destination for US coal exports in recent years. Only the Netherlands and the UK imported more U.S. coal in 2012.

With this in mind, Stanford economist and Energy Institute affiliate Frank Wolak puts forward a different view. Frank and co-authors have been analyzing the likely emissions impacts of expanding U.S. coal exports to Asia using an economic model of global coal markets. This research is finding that increasing domestic coal exports to China could reduce GHG emissions. The basic argument is as follows. Because China has very little natural gas-fired generation and highly inelastic demand for coal, U.S. exports of coal to China will substitute for other coal.  Selling U.S. coal to China could raise coal prices in the U.S. and Europe (a major importer of U.S. coal). In both of these regions there is flexible natural gas fired capacity capable of substituting for coal in the production of electricity. This fuel switching would reduce greenhouse gas emissions. Keep an eye on this site for a full report coming soon.

Many are hoping that the current U.S. commitment to reducing domestic emissions will provide the moral authority needed to negotiate international commitments to reducing global greenhouse gas emissions next year in Paris.  If we really want to lead by example, it is important to understand and account for the emissions implications of both our energy consumption and production. The extent to which U.S. increased coal exports offset reductions in domestic GHG emissions will depend on parameters that are difficult to estimate, including the elasticity of supply for coal at home and abroad, the elasticity of supply of other energy sources (e.g. natural gas), and the own-price elasticity of demand for coal in China and elsewhere.  That said, economics research can and should shed some much needed light on the most likely emissions implications of US energy exports.

[1] This graph may misrepresent the true target. It is not clear if the official pledge refers to all GHG emissions. The pledge is to reduce emissions: “In the range of 17%, in conformity with anticipated U.S. energy and climate legislation..” The “legislation”  was Waxman-Markey which targeted energy-related emissions primarily.

[2] These numbers would look even worse if we account for the emissions generated in transporting the coal abroad. Based on Joe Shapiro’s excellent work on the emissions implications of trade, this could amount to roughly 0.16 tons CO2 per ton of coal exported. On the flip side, these numbers would look a little better if we account for the fact that coal plants in some importing countries out-perform the average US coal-fired power plant in terms of fuel efficiency and emissions intensity.

Many thank to Andrew Revkin for mentioning this post in his New York Times blog and drawing more attention to these issues.

The intended points of my post are: the impacts of domestic coal exports on global greenhouse gas emissions are difficult to tease apart but important to understand; different underlying assumptions can lead to different conclusions; and, new research in this area will help to shed more light on this controversial question.

This prompted a detailed response from CO2 Scorecard: http://co2scorecard.org/home/researchitem/30

Back-and-forth discussion of the strengths and limitations of different modeling approaches/assumptions can help us understand the true emissions impacts of US energy exports on global emissions. An important – and continuing – conversation to be having on this blog and elsewhere. Thanks for reading.