Imagine you have just been pulled over for exceeding the speed limit. The officer explains that the penalty for speeding decreases with engine size. Why?  Because it is relatively more difficult for drivers of high performance cars to exercise restraint and drive the speed limit. What?! 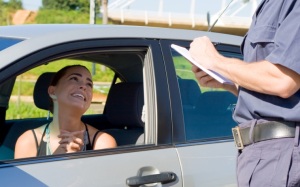 Ma’am, if you had more horsepower,  this fine would not be so high.

Of course, this is not how speeding ticket fines are actually determined. But this scenario serves as a metaphor for how the fuel economy standards faced by automakers are actually set.

The bigger the car, the lower the bar

This all changed when Congress mandated attribute-based standards as part of the Energy Independence and Security Act.  The graph below illustrates how fuel efficiency standards are now determined based on vehicle “footprint” (i.e. the area defined by the points where the four wheels touch the ground).  Each company calculates the CAFE requirements for every model it brings to market. Company-specific fuel economy limits are defined as the sales-weighted average across vehicles sold.  In other words, companies selling bigger cars are held to a less stringent fuel economy standard.

Why un-level this playing field?

One possible argument for moving from a one-size-fits-all to a size-based standard has to do with minimizing the costs of meeting fuel efficiency targets. In general, it is more costly for firms that make larger, heavier cars to meet a given fuel efficiency target. An attribute-based standard could- in principle- be designed to equate marginal compliance costs across firms. This would ensure that fuel economy targets are being met at least cost.

In the U.S., however, the ability of firms to trade credits eliminates this efficiency-advantage. Instead, the National Highway Traffic Safety Administration (NHTSA) offers the following justifications for the current footprint-based standard (details can be found in the final rule and public hearing transcripts).

NHTSA has also argued that “attribute-based standards reduce the incentive for manufacturers to respond to CAFE standards in ways harmful to safety.”  This presumes that downsizing vehicles would make driving less safe. But recent studies have found that, once the safety externalities associated with driving larger vehicles are accounted for, the current vehicle fleet looks inefficiently large.

Looking out for the big guys….at what cost?

The problem with using attribute-based standards to reduce impacts on the producers and consumers of larger vehicles is that it creates an incentive for firms to game the system. More specifically, attribute-based standards provide an incentive for manufacturers to adjust the attributes of the vehicles they sell in order to reduce the stringency of their firm-specific targets.  This is potentially problematic because bigger, heavier vehicles tend to consume more gas, emit more pollution, and are associated with higher traffic fatalities.

A recent working paper by economists Koichiro Ito and Jim Sallee provides a striking example of how this kind of gaming can play out in practice. They focus on firms’ response to Japanese fuel economy standards. The stair-step pattern in the graph below shows how the Japanese fuel efficiency standard drops discretely at pre-determined vehicle weight thresholds.

Koichiro and Jim note that, for firms manufacturing vehicles that are close to a weight threshold, a small increase in weight will deliver a relatively large reduction in the fuel economy standard.  They cleverly use these notches to test whether Japanese automakers have in fact  “upweighted” in response to the standard.

The green bars in the graph summarize the distribution of weight among vehicles sold in Japan. The height of each bar tells you the percentage of vehicles that fall within the corresponding 10 kg weight range. Looking at the bunching of vehicles just to the right of each cut-off, it sure looks as though automakers are upweighting in response to this policy. The authors build a very convincing case for this interpretation. And they argue that the costs associated with this policy-induced upweighting are substantial.

Are we being super-sized?

There are reasons to think that manufacturers’ response to Japanese standards will be more dramatic than anything we will see here in the U.S.  For one thing, Japanese standards are based on vehicle weight which is more easily manipulated.  And there is no trading of compliance obligations in Japan.

But there is anecdotal evidence that cars are getting bigger under the new CAFE standards here in the United States: 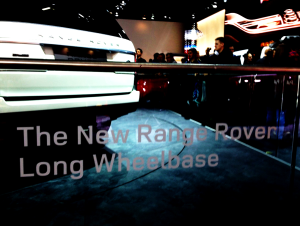 A recent news article reports that sales of large cars and trucks are up.  My co-author Kate Whitefoot has done terrific work investigating the potential design response to footprint-based standards. She has more recently been looking at the 2013 data and finding that the sales-weighted average footprints of cars and light trucks are larger than was projected in the regulations.

Attribute-based standards are a potentially costly way to allocate compliance costs more equitably. If auto manufacturers are significantly increasing the size of the vehicles they sell in response to the current size-based standards, fuel economy targets will not be met efficiently. Calls to flatten the curve that maps footprint to efficiency standards should be taken seriously. Or we should find an altogether different way to redistribute costs. Think pollution permit trading programs that use free permit allocations to achieve distributional objectives without undermining market efficiency.  There are ways to mitigate the cost impacts of fuel efficiency standards on the big guys without creating an incentive for them to get even bigger.

Leave a Reply to KurtCancel Reply