“Cutting carbon pollution from power plants” is the first item on President Obama’s 2013 Climate Action Plan.  The first milestone in this effort involves setting carbon dioxide emissions standards for new power plants. Last week, EPA administrator Gina McCarthy met with predictably mixed reception as she toured the country to promote the new standards. Environmental groups celebrate this as a “forceful blow against climate change”. Coal industry supporters predict the standards will have “devastating impacts to the coal industry and our economy”.  Many expect the proposed rule will be challenged in court.

With all this bluster, you might think these new standards will deliver substantial emissions reductions at substantial economic cost to the coal industry. Think again. A detailed regulatory impact assessment concludes that, across a range of assumptions, the rule will “have no, or negligible, costs or monetized benefits associated with it.”

An emissions standard that’s not expected to reduce emissions?

For natural gas fired power plants, it is easy to see why these new source standards will have little bite. Erin Mansur and Matt Kotchen find that approximately 95 percent of existing combined cycle gas plants built since 2006 currently meet the new source standard.  It is expected that new, more efficient combined cycle natural gas generators will have no trouble complying.

In contrast, new coal plants would be significantly impacted. Emissions rates associated with new coal-fired power plants will exceed the standard (set at 1,100 lbs CO2/MWh) by an estimated 40 percent. To comply with the standards, new coal plants will have to “capture” carbon dioxide and either sequester it in underground geologic formations or use it for industrial purposes.

The figure below helps to explain why these new source emissions standards for coal plants are expected to have no impact, their stringency notwithstanding.  The National Energy Modeling System (NEMS) Annual Energy Outlook (AEO) 2011 has been used to examine the future competitiveness of new power generation capacity under different scenarios.  In the “reference” – or most likely- scenario, it is forecast that no new coal-fired capacity (i.e. pulverized coal (PC) or integrated gasification combined cycle (IGCC)) will be built. 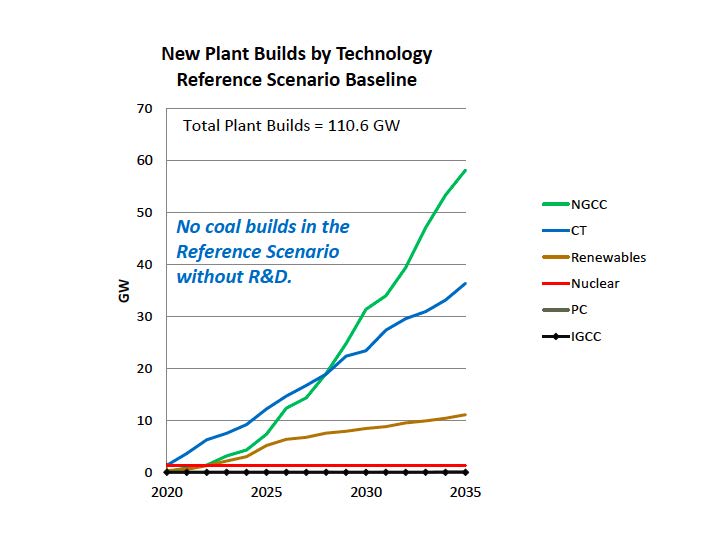 So what’s the point?

You might be wondering why, as sea levels rise and the climate warms, policy makers are working hard to implement a rule that is expected to have little if any impact on future emissions trajectories. There are at least two ways in which the proposed standards could exceed expectations:

(1) A backstop for future emissions increases

If economic conditions manifest differently than expected and there is renewed interest in building coal plants, this policy will require that any new coal capacity be equipped with at least partial carbon capture and storage (CCS) technology.  For example, if natural gas prices are much higher than expected, the new source standard could reduce the carbon intensity of new power plants below what would otherwise prevail.

The figure below summarizes some of the numbers used in the regulatory impact assessment of the new source standard. The 20 year levelized cost of energy for new natural gas generation (blue bars) is estimated over a range of natural gas prices. The grey bars correspond to the levelized costs of new coal plants with no carbon capture. 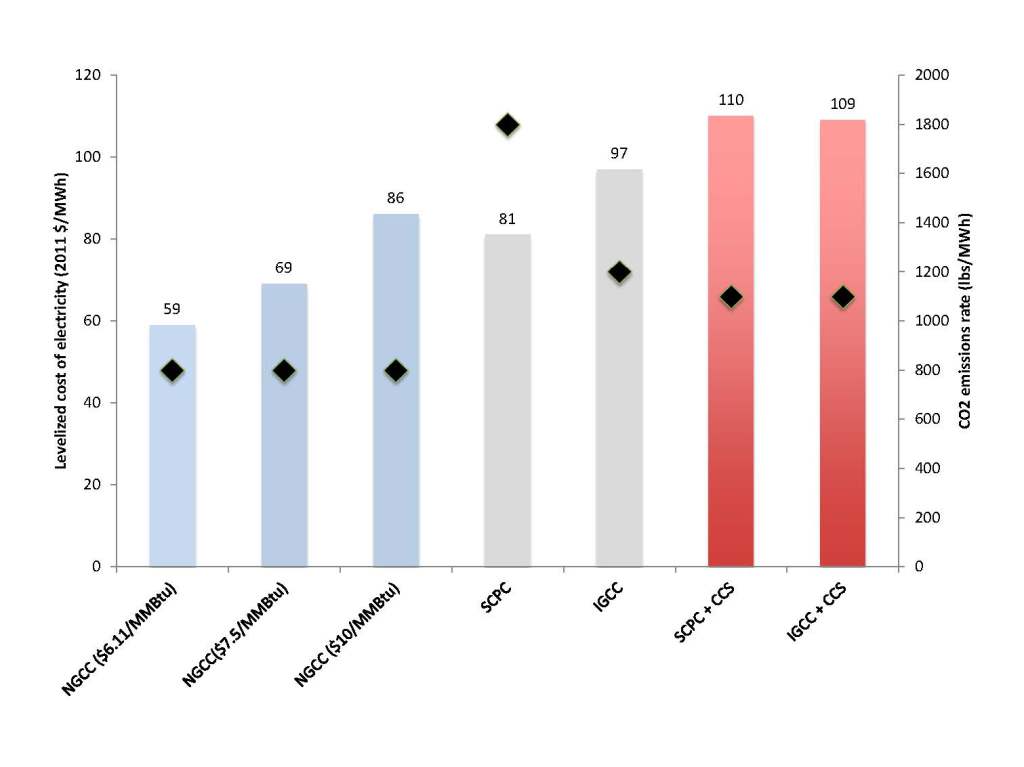 Source: I took these numbers from the US EPA Regulatory Impact Analysis (September 2012)

Taking these levelized cost estimates as given, this figure shows that new supercritical pulverized coal (SCPC) plants without CCS are cost competitive with new combined cycle gas in the scenario in which natural gas prices are much higher than expected. In this case, the new emissions standards would increase industry costs and reduce industry emissions. The cost of building new capacity would increase by an estimated $5/MWh because natural gas generation would be deployed (LCOE $86/MWh) versus the more inexpensive pulverized coal (LCOE $81/MWh). The emissions intensity of new power plants would be reduced by an estimated 1000 lbs CO2/MWh. Assuming the reductions in domestic emissions are not offset by leakage in the form of coal exports (not necessarily a safe assumption), the benefits from this emissions standard would exceed the costs so long as the social cost of carbon exceeds $11 – $12 /ton.

There is another way in which these standards could contribute to future emissions reductions.  Many analysts see CCS is an essential part of the portfolio of technologies needed to achieve substantial global greenhouse gas (GHG) emissions reductions. But CCS technology is currently quite expensive. And these costs are unlikely to fall without significant investment in research and development. A firm regulatory commitment to lowering the emissions intensity of the power sector has the potential to incentivize increased investment in clean coal technologies  (although the ways in which these standards create incentives to accelerate investment is quite nuanced).

Will these new source standards deliver the kinds of greenhouse gas emissions reductions that will be needed to address the global climate change problem? Absolutely not. That said, the proposed standards do represent an important first step that does not require additional action from Congress.  Importantly, new source emissions standards serve as foundation for the next milestone: regulating greenhouse gas emissions from existing power plants.  Standards for existing sources have the potential to have a much more significant impact because they affect the current fleet of sources. To learn more about proposals for existing standards, look for an EPA-sponsored listening session near you.

10 thoughts on “Much ado about nothing?” Leave a comment ›