I was an Assistant Professor at the University of Michigan in 1985 when our downsizing department library put a stack of old journals in the hallway for disposal.  Walking by the pile, I spotted the 1960 Journal of Law and Economics in which Ronald Coase had the lead article, “The Problem of Social Cost.”  I grabbed the issue and it has remained on my shelf ever since, even as I’ve expunged nearly all other hardcopy from my office.

When I first read this paper as a graduate student it was so beautiful and compelling that it restored my faith in the importance of applied economic thinking, faith that had faltered at times under the onslaught of math that is the first year of graduate economics training.  In the MBA course I now teach on Energy and Environmental Markets, I spend a full day explaining the significance of this article.

I returned to that issue of JLE last week after reading some of the obituaries for Coase, who died on September 2 at the age of 102.  I decided to reread the original paper to check if my memory was wrong or if many of the right-wing commentators were repositioning Coase to sidestep the obvious application of his work to climate change.  It turned out my memory was fine. 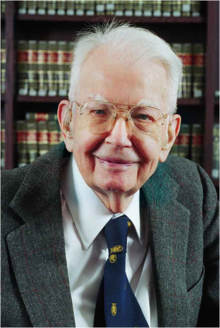 Coase’s article came 40 years after Pigou had published The Economics of Welfare, in which he had argued that polluters should be required to pay a tax equal to the negative impact they have on others.  Coase had the deep and still surprisingly powerful insight (later termed the “Coase Theorem”) that it wasn’t necessary that the source of a negative externality pay, but rather that the parties (eg, the polluter and the pollutee) are able to bargain over whether and how much of the externality is produced.

For this to happen, Coase showed, two factors are critical:  ownership of the property right must be clear – how much, if any, of the negative externality does the emitter have the right to create? — and the parties must be able and willing to bargain over those rights.

Coase recognized that these are not trivial assumptions.  He spent a chunk of the paper explaining how transaction costs – finding all affected parties, negotiating a contract acceptable to all, monitoring and enforcing that contract, etc. – may be prohibitively costly.  In such cases, it might make sense for the government to act as representative of a large set of affected parties and negotiate or impose a contract.  Coase notes this approach is vulnerable to abuse by an unchecked government.  Alternatively, it may be that the cost of correcting the externality is greater than the problem itself and the best course is to take no action.  That seems very unlikely to apply to climate change.

Still, to the extent these criteria are met, Coase demonstrated, the parties can trade the right so that whichever entity values it most ends up owning it.  Efficient trading of the right to pollute moves society towards the optimal amount and allocation of the pollution.  The idea is central to the cap and trade approach to reducing greenhouse gases and other pollutants.

In its editorial remembering Coase, the cap-and-trade-hating Wall Street Journal stated the principle of the Coase Theorem reasonably well, but then its conclusion echoed much of the right-wing press on Coase’s passing: “The too frequent assumption of modern government is that it can play the role of teacher, even when its taxes or regulation raise costs or otherwise make things worse. The Pigovians have had a political renaissance since the 2008 financial crisis, touting the virtues of regulation. But as we see the results, the Coasians are due for a comeback.”

Whoa!  Coase was clearly skeptical of government regulation, but he recognized – indeed  advocated — that government must establish and enforce property rights for efficient trade to take place.   The costs it imposes on the polluters isn’t part of the calculation, just recognition that the total costs to society can be mitigated by facilitating such trade.

It is ironic and disappointing to hear some commentators laud Coase while at the same time saying that cap-and-trade would be too costly to the U.S. economy.  The WSJ editorial page, and many others of similar inclination, have argued instead that “the market” will solve pollution problems without government intervention.  That’s not Prof. Coase; that’s Prof. Ostrich, the one with his head in the sand.

Coase’s argument was that the market can help solve externalities when everyone agrees on who has the property right and when that right can be traded.  Assigning property rights can be difficult, particularly if they are for something that has previously been treated as an inexhaustible free good (think clean water vs. waste disposal, clean air vs. industrial smokestacks, sunlight vs. shading).  But on climate change, the right wing now fights against assigning any property rights on greenhouse gas emissions, even as the science becomes virtually certain that GHGs are the cause of climate change.  Leaving the property rights unassigned is equivalent to giving unlimited rights to emit and making those right untradeable.  Cap and trade recognizes the value of those rights, assigns the property rights, and makes them tradable.

In the conclusion of his article Coase states, “Economists who study problems of the firm habitually use an opportunity cost approach and compare the receipts obtained from a given combination of factors with alternative business arrangements. It would seem desirable to use a similar approach when dealing with questions of economic policy and to compare the total product yielded by alternative social arrangements.”  Indeed.

The “total product” of the economy to which Coase refers includes the losses due to negative externalities.  He recognized that if property rights were assigned and tradable, the market would account for both the costs and benefits of reducing an externality, because anyone creating the externality would face an opportunity cost of doing so, that is, the opportunity to sell the right.

Coase didn’t argue that externalities should be ignored.  He showed us that market incentives can be harnessed to help reduce externalities by the optimum amount at the least cost possible.  At the time of his paper, many on the left wing saw such market approaches as unreliable or immoral, but most have since been convinced of their power.  Sadly, just as the left has learned the lessons of Coase, the right seems to have forgotten them.