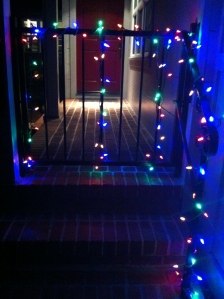 As a parent of two preschoolers, I get talked in to many things.  This past weekend, I was talked in to decorating our front porch with a string of holiday lights.

For the pre-tax price of $16.99 at Costco, my husband brought home a 33-foot string of 100 multi-colored miniature holiday lights for me to indulge my two little chickadees’ wishes.

$16.99?!?  Has there been that much inflation in holiday light prices since last season when I purchased what I thought was a virtually identical set for $8.99?

Is there a downside to LED lights?  The biggest drawback of LEDs is the sticker shock:  The upfront cost of an LED is substantially more than an incandescent.

I’ll be completely honest:  It was easy for me to justify the $16.99 based simply on the warm-glow I received from fulfilling my kids’ wishes. 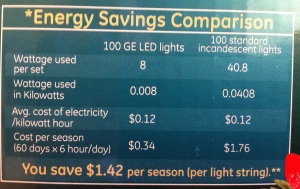 But as we hung-up the lights together last night, I considered the table of “Energy Savings Comparison” that the LED holiday light manufacturer provided on the box, presumably put there to help consumers overcome the sticker shock.

My one-season electricity savings amounts to roughly $2.72, far less than the $8 more in upfront costs from the LED lights.  But taking an NPV approach with a 1% discount rate, in just three holiday seasons, the annual electricity cost savings start to swamp the higher upfront costs.

One last calculation before I go back to basking in the warm glow of our holiday lights:  The manufacturer states that the average lifespan of the LED holiday light string is 20,000 hours.  By that account, I should get around 71 holiday seasons out of my new string of LED lights!

7 thoughts on “Deck the Halls with LEDs” Leave a comment ›